The English and American Civil Wars and Beyond 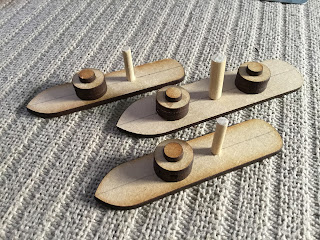 Not quite finished but getting there. These are the three Union monitors that will provide opposition to the Confederates. I need to add a few fittings for detail but the design is such that that there is not a great deal one can add!

I am pleased to report that my modest list of disposals (at least at this stage) has continued to meet with a degree of success and so I have been able to order everything I need to complete the 28mm ECW WoFun project. Many thanks to those readers that took a fancy to come of the bits and pieces - it is much appreciated.

In many ways this is a project that is completely at variance with how I would usually do things - I tend to acquire books and rules at the outset - so having two large and gaming ready armies at the beginning is a pleasant change! It has thrown up a rather delicious dilemma though.

Many years ago, when I was first seriously looking at the ECW as a gaming period I read a biography - I cannot remember who it was by - of Montrose and of his campaigns. I rather liked the idea of salvo firing Irishmen and charging highlanders but I never got around to taking it any further. Fast forward to now and WoFun have a selection of models covering the Scottish campaigns  - Covenanters, Highlanders, Irish and cavalry within the ECW range. It would not take a lot to add these in to the existing set up but I am unsure if this would be the right thing to do.

I am committed to adding to my Wofun collection (at least for those periods that use Peter Dennis for the artwork) but my current thinking is to look at something different. I would like something either ancient or horse and musket and if it is to be of a similar size to the ECW set up it will require being properly resourced in terms of finance and the associated background material.

My thinking at present is looking at a particular period but with a twist. Currently available is a range for the ‘45 and also for the War of the Spanish Succession. I am seriously considering a set up for the latter but with selected elements from the ‘45 range so as to cover the ‘15 (and the ‘19) if required. This would certainly maximise the use of the armies and I already have some good background material on the earlier Jacobite wars. In a way this has highlighted my reservations about adding the Scottish element to the ECW collection. How many armies featuring charging highlanders can one person field? It is all very much in the ‘thinking about’ rather than the planning stage and would not feature until next year in any event. I may even revisit the potential of the Scottish part of the Civil War but for now it needs to be put to one side.

In other news the ACW ironclads are moving to their final stages. The build has taken slightly longer than I anticipated, mainly due to some domestic duties but also because I have needed to relearn some old construction tricks as well as developing some new ones! It is all coming together though and so the plan to get a game in with the collection is still very much on the cards for sooner rather than later. I will be finishing all 6 models and the ‘grand opening’ so to speak will be in action in a game setting. I am really keen to get my Hammerin’ Iron mat out and so that will provide the scenic backdrop.

I think that your model monitors are superb! I look forward to seeing them - and the other ironclads you have built - painted and on your tabletop.

That is very kind of chap! They are not quite finished as I need to add some deck details - a couple of hatches, that sort of thing - but I am pleased with them, especially with the laminated turret idea!

The painting will be done over the next few days and I am hoping to get a game in very soon - probably using Mr Fox’s variant of your Gridded Naval Wargames set. Either them or a set I have been messing around with from a long time ago.

Great start on the model ships David. Looking at images of some of the ACW ironclads I noticed they had surprisingly modern lines; sort of stealth steamships - eg CSS Texas. A great hobby subject. Looking forward to seeing more of these!

Well those monitors look great laready and should look superb with some additional detailing and of course the painting.

They certainly have some surprising lines! The initial batch is of six models - three for each side - and I plan to add a further half a dozen models to complete this phase. I do have in mind some ‘specials’ to add but nothing major.

The plan going forward is to add some later ocean going ironclads - possibly on an imagi-nation basis.

Ultimately I will be looking at pre dreadnoughts.

There will not be too much in the way of detailing - just a couple of hatch covers hear and there. I am torn on the painting as overall black is a little dull. I may opt for a dark grey instead with the odd turret band in white.

As I suspect you are already thinking, probably '45 Highlanders could be used with WSS figures for the '15 as well as the '45, and maybe even become Montrose's confederates too.. Those WoFun figures look good, very tempting!

Funny you should mention that....Joking aside I had a further thought in that using the WSS figures with the ‘45 range you may be able to tackle the War of the Austrian Succession of failing that, go down the imagi-nation route!

Plenty of potential but I need to park it for a while.

Many thanks old chap! I am still getting my head around the whole Scottish thing in respect of what I will eventually settle on. There is no tearing hurry though as it will not be an issue until the new year in any event.

Watching with interest the WoFun especially the WoSS
I am keeping faith 28mm metals (that painting project will get started over the winter) and 15mm metals!

Any new period I would consider WoFun!