Following on from the recent successful attempt to break out of the Blackwater River by the C.S.S. Secessionist the Confederate command decided that a further ship should force the patrol lines and make their way to Immobile Bay. The two ironclads still up river at the small port of Hullbridge were now complete and ready for action although one was to be retained for local defence alongside the various other gunboats in in use. The C.S.S. O’Hara (Captain Butler commanding) was therefore ordered to make the attempt. As an aside Captain Butler had campaigned rigorously to make the attempt as he had important business in Immobile Bay that was vital to the Confederacy.

It was known that the Union employed monitors to patrol the junction with the Missenhitti and it was believed that due to the damage sustained by the U.S.S. Hiawatha in the recent battle with the C.S.S. Secessionist that only a single ship was immediately available.

What the Rebels did not know was the identity of the ship that was tasked with protecting the vital Blackwater junction. 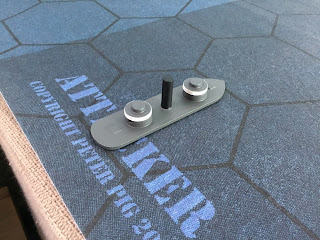 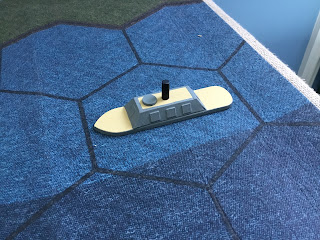 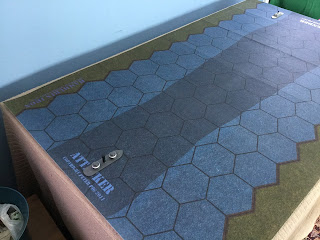 Turn 1. There was no firing from either side. The Union rolled a 1 for initiative opposed to the Confederate 3 so they moved first. Both sides maintained course and speed so moved 2 hexes straight ahead. 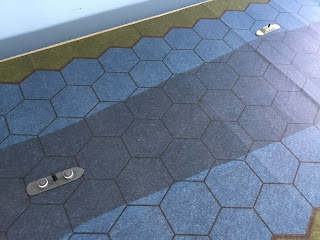 End of Turn 1. Note that the distance between the two ships is now 8 hexes or maximum gun range.

Turn 2. Both sides are able to fire - all firing is simultaneous - and do so. The U.S.S. Senator opens fire with her forward turret with two heavy guns. These roll 3d6 each but deduct 1d6 for the range meaning that 5d6 are rolled in all. The scores are 1, 2, 3, and two 5s so there are two potential hits on the Rebel ship. The Rebel player now rolls for his saving throw. As a ship with heavy protection he is able to roll 3d6. He rolls two 5s and a 6 meaning that he has ‘negated’ 4 hits - as he had only suffered 2 the damage was comfortably avoided. The Rebel ship fires back. Her forward gun is a single medium rifle so 2d6 are rolled. The 1d6 deduction for range is offset by the additional d6 for being a rifle thus reflecting the weapons accuracy. The Rebel ship rolls a 1 and a 2 so misses entirely. For initiative the Rebel ship rolls a 5 whilst the Union rolls a 6 so the Confederates move first. Both ships turned so as to enable their full broadsides to be brought to bear with the Union ship looking to occupy the centre of the channel. 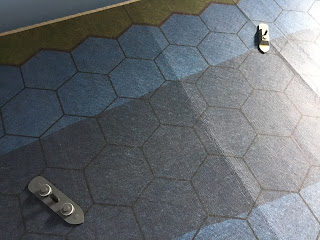 End of Turn 2. Both sides attempt to get the most amount of guns to bear on their opposite number. The Union certainly have the advantage in this case with their turret mounted artillery.

Turn 3. The C.S.S. O’Hara opens fire with her forward facing medium rifle at a range of 6 hexes. Again she rolls 2d6 with 2d6 being her base roll, minus 1d6 for the range and plus 1d6 for being a rifle. She rolls a 1 and a 6 meaning that there two potential hits arising from he roll of 6. The 1 is of course a miss. The U.S.S. Senator rolls 3d6 for its heavy protection saving roll. The roll gives a 1, a 2 and a 6 meaning that the two potential hits have been negated. It is now the Union turn to fire and with both turrets able to bear it could potentially be very effective.

Rule on the fly. I have decided that turrets must be fired individually and that gun types can only be massed if they are of the same weight. Also, rifled weapons are fired separately. The deduction for range is applied to individual guns. Light guns may always fire at long range with 1d6 but do not get the bonus for being rifled if applicable. I will need to think about this further.

Each turret has two heavy guns meaning a base of 6d6 each. However each gun loses a d6 as they are smoothbore weapons firing at long range, This means that each turret fires 4d6. The U.S.S. Senator rolls four 3s, two 4s, a 5 and a 6 meaning there are 5 potential hits. The C.S.S. O’Hara rolls her 3d6 to save and gets a 3, a 5 and a 6 meaning that she saves 3 out of a possible 5 hits. Two hits are recorded on her damage chart. Both sides roll for initiative. The Union roll a 1 whilst the Rebels roll a 6 so the U.S.S. Senator moves first. Both vessels turn into one another with the Rebel ship desperate to bring her full broadside to bear. This far she has been fighting with a single rifle so is heavily outgunned. 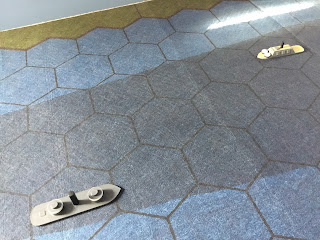 End of Turn 3. The two ships readying to exchange broadsides. The damage markers are for show and are removed at the end of the turn with the damage recorded on the ship chart.
Both ship continue to fire with the C.S.S. O’Hara still relying on her forward medium calibre rifle. Again she rolls 2d6 as the range is still long. She rolls a 2 and a 6 meaning there are two potential hits. The U.S.S. Senator rolls to save and scores a 3, 4 and 6 so the hits are discounted. She returns fire with 8d6 and scores an incredible two 1s, a 4, 3 5s and a 2 6s for 8 potential hits! The C.S.S. O’Hara rolls to save and scores a 6, a 5 and a 3 meaning that she negates 3 hits but still suffers 5.
The C.S.S. O’Hara has now sustained 7 out of 10 hits which means she is now 1 point below her critical level and must therefore break off the action as best as she could.
Overview
Whilst I am happy with the firing system I need to rein in it a little. A salvo firing double turreted monitor seemed to be overly effective so I need to think further about the gun multiples. An idea that occurred to me was to restrict heavy guns to only being able to fire every other turn (Andy Callan employs this in his ‘Noddy’ rules) or to allow damage savings rolls against each source of incoming fire. For example, the monitor would resolve the fire from one turret (including target saving rolls) and then the second turret (again, including savings rolls). Remember that during the period there was not really much in the way of centralised fire control.
On balance I am thinking that allowing saving rolls per incoming attack may be the best way to handle this - certainly the C.S.S. O’Hara may well have appreciated it!

A nice AAR that has a nice level of detail on your rules modifications David. Once again I love the look of the ships:)

Thanks old chap! The rules had that ‘close, but no cigar’ feel about them but I think I may have just about ironed it out. What I really need to do is to run a further play test to polish it off.

That will be next then!