Back to the Business in Hand 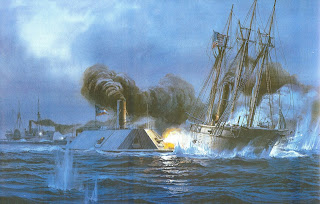 C.S.S. Palmetto State in action. This small ironclad is the very loose inspiration for the two currently under construction although when they are built the only similarity will be the layout of the guns!

Work on the other two Confederate ironclads has resumed and I am hoping to have them built today. This will give me the weekend for painting as well as the construction of the Union monitors. My second order to Warbases is currently being readied and should be with me early next week. This will mean central battery ironclads and also broadside types as well as some smaller stuff - this is not for the ACW but something a little later, for no other reason than it will be fun to do.

It was suggested to me that perhaps a ‘how to’ blog post about how I have been making my ships might be a useful guide for those thinking about a similar project. I would be really happy to do this but rather embarrassingly at present I am still refining the building technique. To begin with I am no longer using Balsa Wood and at present there is a lot of improvisation of materials and techniques during construction! Once I have the process properly dialled in then I will be delighted to pen a post or two. It is certainly something I will be pleased to do.

Mention of Warbases has reminded me of what a splendid fellow Martin (Mr Warbases) is. When he emailed me after I sent my second set of diagrams he pointed out that he had made a mistake with the original batch. One of the hull shapes was 1/16th of an inch out. I had noticed it but it really was not going to be a problem as far as i was concerned and I did not bother mentioning it. Martin however, had other ideas and so ‘fessed up’ to the minor error and so is sending me that part of the original order at the the correct size forward of charge. Now that is what I call quality service! The net result is I shall only be using Warbases for my bases and other small MDF bits and pieces going forwards.

Well done Martin and Warbases and many thanks once again!

The recent ‘Dreadnought’ moment has set in motion a number of events of the ‘massive disposal to raise monies for more WoFun’ type. The main thing will be to clear the decks and rest assured that although I am not giving the stuff away it will be modestly priced. I am listing at a general level what there is and should anyone be interested in anything please email me at roguejedi@btinternet.com and we can see what we can thrash out.

NOTE: Everything is unpainted, unassembled and on the sprues where applicable!

20mm Metal Napoleonic Naval - British and French crews including command, boarders, gun crews, British Marines and naval guns. These are all Newline. There is around 150 figures give or take and 10 guns

20mm Metal WW2 14th Army and Japanese - Each side consists of 50 to 60 riflemen plus lmgs, hmgs, light and heavy mortars, command and gun crew. Also there are 14th army engineers and Japanese anti tank infantry. In total there is around 200 figures including artillery - (around 8 14th Army and 6 Japanese). The figures are a mixture of FAA (14th Army) and Frontline for the Japanese.

15mm Metal WW1 Arab Revolt Irregular Miniatures. Around 60 Turkish infantry, two machine guns and crews and two field guns and crews, a dozen cavalry and a command including a staff car. The Arabs have around 60 foot and a dozen each of cavalry and camelry. There is also two hard plastic PSC German 105mm howitzers and crews.

20mm Risk Medieval Semi Hard plastic Figures. There is two of each of the four armies that come with the game.

12mm (?) Risk Hard Plastic 18th century and Napoleonic figures. There is a couple of full sets of the former and one of the latter.

30mm Spencer Smith kepi wearing ACW infantry and cavalry. Originally planned to use for a Pacific War style set up so also includes a couple of Krupp FPW guns and a rather nice kepi wearing French mounted general using Binoculars. Around a hundred foot and 20 mounted with the guns.

1:600th/3 mm Tumbling Dice infantry (close and loose order) cavalry and artillery for WW1. There is also a selection of vehicles produced by Oddzial Osmy - British male and female tanks, Whippets, A7Vs and Rolls Royce armoured car. Brigade Models Middle Eastern buildings and Oddzial Osmy produced palm trees and trench sections. There is also some Peter Pig ACW artillery and command as well some terrain from the Hammerin’ Iron range - a couple of forts and a rather nice resin farm complex.

Canny readers will have no doubt noticed that I have not mentioned the 30mm ACW Spencer Smith painted collection. For the time being this is staying put and indeed, I want to paint the final pieces for it to finish it off. I have yet to consider its ultimate fate but for the foreseeable it is not going anywhere, at least not until the painting is finished and I have been able to get some games from it.

As mentioned if anyone wants to know more about any of the above drop me a line.

Well that is excellent service from Martin and I can see why you will continue to place your orders with him. I've had the same superb service from Dave & Leon at Pendraken for more years that I care to remember, hence why I continue to order from them.

Thankfully there is nothing in your for sale pile to tempt a poor weak soul such as myself! Well there almost is but I already have more than enough stuff in 10mm. A close call though;)

Drop me a line at roguejedi@btinternet.com and we can sort something out.

I love the way you go "all in" on you projects!

The Warbases input to this project has been immense and to be honest I would not have attempted it otherwise.

Don’t worry about not being tempted - I have plenty of other stuff to get rid of!

It can be a mixed blessing for sure - sometimes you end up really sick of whatever it is you are doing and so move on to something else!

Luckily the ships will be spanning three periods so there will sufficient variety to get me over the rough spots!