A great primer for the river battles with the follow on volume - Gunfire around the Gulf - extending the coverage to the sea. 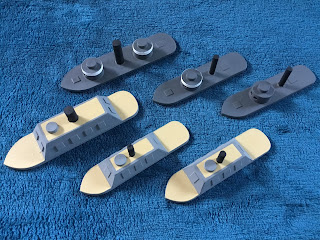 I know, I know, they are old hat now but I still like looking at them!

The ACW naval rules in Bob Cordery’s book: Gridded Naval Wargames are great fun to use and give an excellent game as written. They are the product of much experience in respect of rules writing as well as a thorough knowledge and understanding of naval warfare of the period in question. It is fair to say though that the ship types depicted in the rules are pretty generic. This is fine up to a point but for the gamer that wants to drill down into the period then the application of some additional ‘chrome’ or detail moves away from the optional to the essential.

For me one of the attractions of the ACW from a gaming point of view is the incredibly diverse range of ships in use on both sides. From purpose built warships down to hastily requisitioned and armed civilian vessels the range in use by both sides is huge. Whilst I want to ‘ring the changes’ I most definitely do not want to go down the ‘rivet counting’ road of naval wargaming - this would be contrary to the spirit and flavour of Bob’s rules - and so a careful balance needs to be stuck with any additional features.

The more I read the rules as written the more confident I am that what I am doing will achieve that correct balance. To put it more succinctly, the rules will expand Bob’s original concept in a sympathetic way, there by preserving the all important ease of play and period ‘flavour’.

My additions will mean a degree of work on the part of the user in that a knowledge of the ships being represented will be useful. This is for a number of reasons. Speed, size, armament, and protection all play a part and will be needed for the ship record card.

I propose to detail the the four areas as follows.

Speed. Ships will be able to move a single hex for every 5 knots of speed. I need to think about turning as some ships were notoriously unwieldy to manoeuvre whilst others were quite handy by comparison.

Size. This is basically tonnage and overall dimensions. I will be using this as the basis of the number of hit points a vessel has but as yet have no specific formula in place. I am tempted to use Bob’s figures as the baseline for the types I shall be using and just tweak these up or down to suit. Certainly it would save a lot of work!

Armament. This will be one of the two biggest changes to Bob’s rules. Ships will have individual guns and these will be rated as heavy, medium or light. They will also have the positions noted on the ship record chart. I intend using the data cards from the Yaquinto game Ironclads for this information, either that or the ship data charts from David Manley’s rules. Under normal circumstances a heavy gun rolls 3d6 to hit, a medium gun 2d6 and a light gun a single d6. Firing will be as per Bob’s rules although with some additional steps in the process - nothing major, just to incorporate the revised weaponry.

Protection. I have no intention of working with armour penetration or hit location rules as this would be contrary to the spirit of Bob’s rules. All ships will be classed as having the following protection levels: Unprotected, Light, Medium and Heavy. My plan at the moment is to combine the protection level of the target ship into the firing process. Essentially the firer rolls the number of dice required by the weapon type and the range etc. Let us say that the target ship has a medium level of protection. The firer rolls, for example 4d6 and scores a 4, a 5 and a glorious 6 (meaning two points of damage - the 4 and 5 are but singles or 4 damage points in total). The target ship has been hit by 3 dice. It does not matter what weight of artillery has caused the hits - it is the protection level of the target that is important. A medium protected warship rolls the number of dice equal to the number of dice that hit but minus 1 dice. In this example then, the target was hit by three dice but has a saving roll of two dice. The chance to negate hits is the same as scoring them - a 6 negates two hits (not dice) and a 4 and 5 single hits. The target ship rolls their two dice and scores a 4 and 6. This is in effect 3 ‘saves’ so taking these from the hit points scored means that the target ship has sustained a single point of damage. Ships that are lightly protected roll two less dice to negate potential hits whilst unprotected ships do not have any saving dice. Obviously a target ship may roll well and negate all the incoming hits.

I rather like the mechanic of opposed dice rolls and certainly think that this is in keeping with the spirit of the original rules.

All of the above are very much works in progress and so I need to spend some time writing then down (tidying my thinking as I go!) And also to think about trying them out. Another outing on the Missenhitti River may well be in order.

I recommend Peter Pig/RFCM's Hammerin' Iron. They give a great game.

I have a copy of them and have used them a number of times. They are certainly one of my fall back options but I really wanted to take Bob’s rules and crank them up a little. I have a bit of bee in the bonnet with this and so will push on to see how far and where it goes. For the record I am also looking at the War of the Triple Alliance and the Pacific War using a common system.

I am enjoying the process though!

All very interesting David and I'm looking forward to seeing more of your rule developments:)

The plan is to add a little chrome that sits well alongside the original rules. I have a few ideas that I need to iron out but another action is in the offing to try them with.

It is great fun though!

Hi David -
Years ago I adapted a simple 'One Brain Cell' rule set for use with my own scratchbuilt balsa vessels. They were designed for an 'open board' (i.e. ungridded). In that set I found the best weapon was ramming, the damage accumulated from gunfire tended to be a bit slow, although a critical hit in the boilers might have the crew abandoning ship to escape the scalding steam.

My rules took into account the river flow (so speeds were relative to the land, not the water), and shoal water, especially near the river banks. Any vessel that strayed within 6 inches of the river bank had to roll less than the distance in inches from dry land to stay afloat, or, if having gone aground, to get the vessel off again. Finally as moves were 'simultaneous', speed and intention to turn (or not) had to be indicated by some chits I had made up. Except for very small vessels (e.g. tug boats) the maximum turning angle was 45 degrees.

The method for turning was: first half of the move straight ahead; then turn the vessel on the spot anything up to 45 degrees, then complete the move straight ahead from there. Artificial though this method was, it did have the desired effect upon manoeuverability (or lack of it). It also had the effect of determining the 'turning circle' according to speed, not weight of vessel.

Probably one of the last battles ever fought with this rule set - more than 25 years ago now - was a fleet action somewhere along the Mississippi. It might have been the Battle of Fort Cushion, I'm not sure, now (there was a Ft Cushion battle, I don't recall if this was the one). I commanded the Confederates, barreling upstream with one casemate ironclad and some cotton clads against Cairo class gunboats and Ellet rams.

At the end of the action, I had put four ships out of action ... two of them Union. How did I lose the CSA ships?

OK. Very early in the action, one of my ships, with a reinforced bow, rammed an enemy gunboat head on. The damage was severe on both sides, enough to put the Union vessel in a sinking, or near sinking condition, and the Confederate in almost as bad shape.

The story didn't end there. At some point I managed to sink another Union vessel. Then opportunity seemed to appear that I might take out a third. Thrashing its way upstream, with an enemy coming down, another cottonclad swung hard starboard rudder. I did say 45-degrees was the maximum angle, didn't I? The enemy was going too fast, my guy shaved by the enemy stern with several millimetres separating, and then...

... Then came the realisation that my ship was headed for the river bank at a high rate of knots, and no way to stop it. Not even the shoal water: the CS vessel shoved its bow firmly and irrevocably ashore (the test for being in shoal water comes at the end of the turn). I think the river bank was reached with still a bit of movement allowance remaining.

After well over 25 years, I still recall that battle as a glorious passage of arms. Paul 'Jacko' Jackson might remember it - he commanded the Union.
Cheers,
Ion

That sounded like a lot of fun to be sure! There are many elements at play in your account that are things I want to incorporate in my version of Bob’s rules and it has given me a fun reminder of the things I need to consider.

War stories like this stay long in the memory!

Good to hear from you old chap! I still have fond memories of Market Garden at COW a couple of years ago!

I have never been ‘Tangoed’ - is this a good thing?

One of my better games!

On being Tangoed, in general I think it is a good thing - recognition that you have done something interesting, a bit of free publicity and the possibility of attracting more people to your blog.

That is always nice to know!

Market Garden was enormous fun and with Carry On Up The Nile as well it was a cracking Saturday!