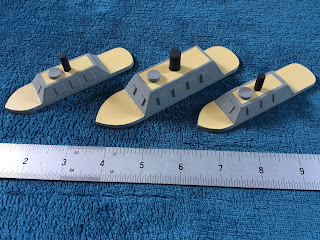 The CCS O’Hara (left), the CSS Secessionist (centre) and the CSS Wilkes (right). The two smaller vessels are near sisters differentiated by the CSS O’Hara having its pilot house set further back. This was due to confusion over the measurements used during construction - imperial being read as metric!

The first of the Confederate warships arising from my current project have finally appeared. Much like the Union ships featured earlier they are ‘loosely based upon’ rather than representing specific vessels. For both sides all I need to do is to varnish them and organise the flags. They will be appearing in action - at least some of them will be - later in the week.

The largest of the three has been christened the CSS Secessionist whilst the two smaller near sisters are the CSS O’Hara and the CSS Wilkes. 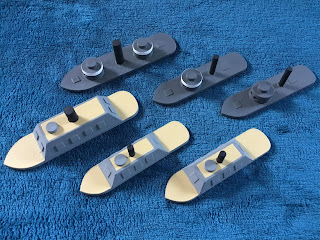 All six virtually ready for action

As I have mentioned previously, these six models, whilst pretty simple to build, did give me a few problems along the way. I like to think it was because I was a little out of practise on the modelling front as well as working in a larger scale and with newer materials than I previously used.

I must say I prefer the Confederate ships from a purely visual point of view. Having said that, all six ships look great and can't wait to see them in action.

There is not a lot you can do with a monitor, in fact even the casemates are fairly simple looking! I am looking forward to giving them a run out in a couple of days.

I am pretty pleased with them and thanks for your kind comment - it is much appreciated!

Looking good, they have a very definite charm :)

Many thanks old chap! They are what I would call ‘old school classic’ in terms of the execution. They are neat, tidy and unfussy and this will be the standard for the rest of the project.

Hi David -
They do look good, and no mistake! One way of differencing sister ships is to put a white or coloured circle around a funnel. Just a thought.

I like the straightforward paint application. Maybe I ought to have got you to paint up my new navy. I really am pants at painting naval units...
Cheers,
Ion

The CS vessels are very nice too - looking forward to the first battle.

Thank you old chap! I will do something to further differentiate the two near sisters - not sure quite what yet but I am thinking about fitting one with a spar torpedo.

The style of the models is such that any attempt at weathering - shading, highlighting, washing etc - would have looked out of place within the detail of the models. It also makes the process easier and quicker!

I am flattered by your suggestion about me painting your ships - however tongue in cheek it was - but sadly geographical logistics may have been a challenge! For the record that is the first time ANYONE has ever suggested that I paint their models for them.....

Many thanks and all the best,

Cheers old chap! The first action will be later this week - First of all I need to clear the table in the man cave!

What great ships David. I am sure they will be easier to play with than my old 1/1200 now I am getting clumsier. Look forward to reading how the battle goes. Best wishes. Jim

Many thanks old chap! This is the size I shall be working towards for all my ship models going forwards - easy to make and paint and having that old school swagger!

I hope to get to the game tomorrow so the AAR will follow in due course.

They look splendid David, much better than I thought they would be when I first saw all those MDF pieces.

Many thanks old chap - much appreciated. I must admit that being surrounded by piles of assorted pieces of MDF was a little daunting to begin with but they went together well enough and it augurs well for the remainder of the project.

It is great fun as well!