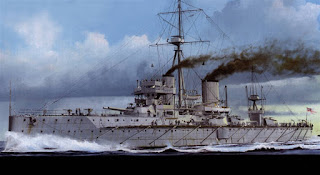 The first of the all big gun battleships - H.M.S. Dreadnought

On the 10th of February 1906 H.M.S. Dreadnought was launched and in one fell swoop rendered all other battleships currently in service obsolete. Although not quite as historically significant I enjoyed my own personal H.M.S. Dreadnought moment yesterday. The arrival of my WoFun 28mm ECW starter set has been the the most significant thing in my personal Wargames journey since I first set foot in the New Model Army Limited way back in the 1970s. For me it has rendered all my conventional figure based gaming aspirations obsolete.

How is that for over the top dramatic impact?

Seriously though, it has really given me much to think about and has served to hasten a decision I had more or less already made and have been obliquely mentioning in the last few blog posts.

My decision is more evolutionary than revolutionary and involves what is for me the ongoing issue I have with painting Wargame figures. Therefore, and this point on, I am not going to bother, unless it is for something very low level - man to man skirmishes or something like Space Hulk or Heroquest. Naturally ships or anything non organic is exempt from this as I enjoy both basic scratch building and painting the results thereof.

Simply put then, no more painted wargames armies will be produced by me (no great loss there since the last ‘army’ I painted was a 15mm DBA Ancient Numidian army using Essex figures roughly 20 years ago, give or take!) so Elvis has well and truly left the building!

No more time spent on trying to justify calling a collection of three dozen figures an army, no more time spent looking through figure catalogues or ruing the one key figure missing from x companies range, no more poring down long lists of paints and wondering about the merits of gloss/matt/satin/acrylic/enamel/oil or anything else. No more worrying about flocking, filling, shading, washing, highlighting and varnishing and spending hours painting bases etc.

For those that enjoy the collection and painting of figures I have nothing but respect and admiration but simply put, I do not.

From now on if I want a visually appealing spectacle of a game I will use Wofun - pure and simple. The block armies will have their place as will the board games but for a tabletop battle with massed armies it will be WoFun. Personally fielding an army painted by Peter Dennis is no bad thing - he can do it far better than I ever could!

Levity aside, this is a really big deal for me because, to be frank, I have been wedded to the idea of using figures for as long as I can remember so cutting them out entirely, despite really not enjoying that part of the gaming process, has been a surprisingly difficult call to make.

Wofun has given me a really viable alternative to the use of figures and it is one that I intend to embrace as fully as I am able.

On the face of it it probably seems expensive and for sure, a look on the website shows some fairly hefty looking price tags. However, consider this, The 28mm ECW starter set is Euro 117 plus Euro 32 for the bases. Call it Euro 150 for convenience. For that you get 4 x 48 figures infantry regiments, 2 x 54 figure cavalry regiments, 8 x guns, 32 x gunners and 16 assorted mounted command, 17 if you include Prince Rupert’s dog.... 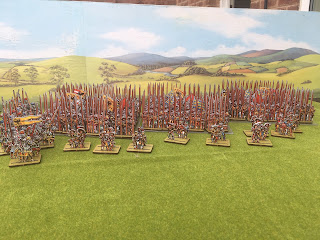 A stirring scene indeed. Fifteen sprues worth of 28mm Landsknechts. These are from the collection of Andy Callan and the picture is used with his permission for which my grateful thanks are given. Andy assembled this lot over the course of yesterday afternoon....

Taking an average box of 28mm plastic infantry with 40 figures as an example one would expect to pay around GBP 20 a box. So £100 would get you 200 infantry. So far so good. Add, say 10 boxes of cavalry to give you some mounted commanders and a couple of boxes of artillery and you could easily get to getting on for some GBP 300 not including bases (unless you used those provided) and you still have to paint them. Allow for the paints, scenic materials and the time to ready them for action and then think about just how much that army has really cost. Naturally this is offset by the enjoyment factor which varies from person to person. The essential thing is, however you slice and dice it, WoFun is actually not that expensive overall but obviously is still a sizeable investment for anyone. It is also ready to use on the table top in an incredibly short time.

You could say that I am comparing apples with oranges and up to a point I would agree but the essential truth is that this is a viable way of fielding meaningful looking armies on a table top - in a way that would add bulk and substance to such things as Command and Colours or Portable Wargame style battles. Representing a C and C block or a Portable Wargame strength point with a single figure or a base of figures is not a new idea and is certainly effective. A WoFun base typically has 8 foot or 6 mounted figures which really adds substance if you are using them on a ‘one base equals one block/point’ basis.

In a way I am very fortunate in that I am not heavily invested in any particular scale of figure so making the leap into a new style of gaming representation is probably easier for me than for many. Certainly if I had sizeable collections of traditional figures I may not be quite so gung ho.

For now there are many things for me to consider. I want to add to the ECW collection for completeness and so am getting an order together. I will look at another period to use WoFun for and I am also looking at adding to the block armies. I also need to think about disposing of those figures that I do have in order to finance the new additions. Terrain will need to be addressed so I will have a think about that along with the rules I will be using for the ECW.

On a separate note work has resumed on the two Confederate ironclads and so the build of these should be completed tomorrow. Whilst they are being painted I will be building the Union Monitors and in the meantime a new order has gone into Warbases for the next phase.

It has been an eventful couple of days for sure but I finally feel as though I have found my particular niche.

Well David I think you've made the right decision, as you know from our mails. Prior to this post I too was thinking about the actual cost of the WoFun figures versus 28mm plastics or metals and the true costs and time involved. You have expressed this more eloquantly than I could! As you know I have my own block armies which I enjoy using and as I get older and my eyes aren't as good as they used to be, the figure painting side of the hobby is less attractive than it used to be. For me the game is becoming more important than the painting, although I still do enjoy the latter when the muse is upon me.

This post and our mails has really made me start to re-assess my gaming, my lead mountain and the rulesets I use. A cull is certainly in order and I have already started making a list of stuff to keep, stuff to go and a not sure list. Hard decisions to make for sure but ones that need to be made.

Whilst my solution certainly is not for everyone it will work for me - I am now ‘comfortable in my own skin’ so to speak.

Aside from the aesthetic attraction the Wofun stuff is light and very easy to store. The pike stands fit upright in a normal box file so ferrying the collection around will be really simple and a lot easier on the back!

I have selected the items that will be heading out - the list will feature on my next blog post - and hope to be investing the realised proceeds into additional Wofun.

Meanwhile though, back to the ships!