More on the ACW Naval Rules 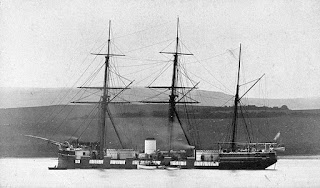 Something a little unusual currently on the stocks - possibly two of them....The Confederates would certainly have appreciated having them on side!

I think I am about ready to give my tweaked version of Bob Cordery’s ACW rules from his excellent book Gridded Naval Wargames. The nub of my thoughts I outlined in my previous post and after further consideration and endless jotting down of bits and pieces (with the occasional scribbling out) I have got to just about where I want to get to.

The next step then will be a test run but it will not be the last as I am conscious that at present the variety of model ships I have to use is quite limited. I have a further four ships currently on the stocks but these are very much at the top end of the spectrum being both well armed and armoured. Once these four are ready I shall be looking at the other end of the scale - gunboats of various sizes.

Further to my post of yesterday it is probably a good idea for me to outline what is what in respect of the various categories I am using where they differ or are in addition to Bob’s originals.

Ship Categories. The only real change here is that I am expanding out the Steam Frigate and Steam Gunboat categories to allow for armoured vessels in the former case and varying degrees of protection in the case of the latter - tin, timber or cotton. There will also be a bigger range of flotation points in play to reflect the various sizes of ship in use. A further tweak will be to record if a ship is fitted with or configured as a ram.

Ship Speed. One hex per 4 knots of speed - originally 5 but in retrospect I think 4 will allow for better modelling of specific types.

Flotation Points. 1 point per hundred tons up to 1,500 tons 1 point per 250 tons thereafter. the critical point is typically one third of the total so a vessel with 15 flotation points will have a critical point of 5 so when it has sustained more than 10 hits it must look to its own safety and break off the action where able to.

Armament. Ships should have a diagram showing the location of their guns and these are rated as Heavy - 8” or 100 pdr plus, Light - 18 pdr or smaller with the Medium category being everything else. Note that guns classed as Rifled should be noted with the letter ‘R’ in brackets at the gun location e.g B H R is a bow mounted heavy rifle.

The sequence of play is identical to that in Bob’s original rules and the only procedural change really concerns firing. Bob used a sliding scale so that the number of dice rolled to hit reduces as the range lengthens. This is a tried and tested technique as it replicates both the reduced chance of hitting a target the further away it is and also the reduced damage effect when you do. It is both a simple and elegant system. As my version is differentiating between gun types a system that reflects these in needed. The approach I have adopted owes more than a passing nod (no pun intended, well maybe it was!) to the system that Andy Callan used in his venerable ‘Noddy’ rules for ACW riverine warfare from way back in 1984.

I have adopted the following range bands. Point Blank is range 1, Effective is ranges 2 though 4 whilst Long is 5 through 8.

But what of light guns that only roll a single d6 firing at long range? I hear you ask. What indeed. The key part of this is that ships may only engage a single target with all the guns that bear. This may mean multiples of varying weights of ordnance. The addition or deduction of a dice for range applies to the entire salvo - not to the individual gun unless that is all that can fire. This means that for the light gun if it was on its own would not be able to hit a target at long range (unless it was a rifle gaining an additional d6).

I considered allowing for the effect of different calibre of weapons opposed to varying levels of protection but to be honest this would have added a further layer of complexity that would not be in keeping with the spirit of the rules. I have assumed that any calibre of weapon has the potential to cause damage to any vessel regardless of its protection level. Remember that damage control during this period, especially in the face of the new technology in use, was very much in its infancy and so many of the safety features of later warships simply were not available.

The first of my play tests will feature ships that have yet to see action and it is worth pointing out that the after action report will not be filled with my usual purple prose - it will be strictly business. Well almost!

Well, David, these seem to achieve your objective of sticking to the spirit of the rules. Some people seem to hate saving throws but I am inclined to the Peter Pig view that they give both sides something to do! It seems that you aren't going to have 'special effects'. Although tempting I guess these are reflected in the gradual reduction of flotation and would add another level of record keeping. Looking forward to seeing how things work out. Best wishes. Jim.

Given the slapdash way that a lot of the river actions were fought during the Civil War having opposed dice rolls seems to reflect the mayhem rather well! I am thinking about critical hits in some way but it will be very limited - pilot house, powerplant, steering or weaponry. I am also thinking about fire but all of this will come in time. I want to get the firing and damage dialled in first.

Plenty to think about though!