On the Home Straight - For Now! 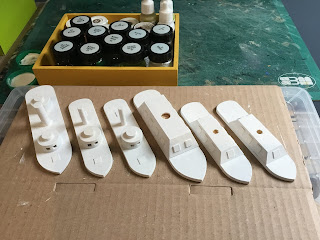 Finally at the painting stage. Three Union monitors and three Confederate casemate ironclads. The latter have the funnels and pilot houses waiting to be painted before fixing - mainly as I need to paint the wooden roof of the casemates. I hope (fingers crossed!) to get these painted over the weekend and in action next week.

My previous models were constructed largely with balsa wood for the hulls and main parts of the superstructure and a combination of craft sticks and coffee stirrers. Odd bits and pieces featured and I remember using plastic card for the gun port covers.

Balsa wood I found ver easy to work with although it needs careful handling. It is easy to shape and could be sanded as required very easily - in fact my building process always allowed a couple of millimetres hear and there so that the models could be sanded into shape - particularly when building angled casemates.

The models I am building now are on the face of it easier as a certain amount of the material was pre cut (the hulls and turrets although there will be more). However, this advantage was initially squandered as I tried to build the models using my old ‘allow a couple of mill here and there and sand to size’ technique. MDF does not take filing very well! No major disasters but a degree of careful trimming with a very sharp knife put things to rights. The lesson here is to make sure that all measurements are a lot more accurate than I previously did.

I did struggle with raw material as much of what I used previously I no longer have - mainly on the plastic side - so I was forced to improvise. The gun port covers and deck hatches are cut from the lid of a magazine tub!

For what I  shall be using these models for they have come out rather well. I thoroughly enjoyed the building process and several valuable lessons were learned. I have owned out the painting schemes I shall be using and they will not take long to get into fighting trim. I am not finished with the naval side of the ACW by any means and have plans for around another dozen models. This was certainly more than I envisaged originally but my plans have evolved slightly.

I am looking forward to the next two ship building projects. The first of these will be some ocean going Ironclads from the 1865 to 1885 period - probably centred around the late 1870s. I have a hankering for some naval imagi-nation style gaming involving those two doughty adversaries Fezia and Rusland. Following on from that - which will feature around two dozen models - I shall be looking at the pre dreadnought era, agin this will be from an imagi-nation perspective and will probably be featuring Fezia and Rusland once again but who knows?

In any event it is really good to be back building ships again and with the new techniques and the advantages of laser cut MDF, it should be a lot of fun. That’s before I even get to the table top!

These models look great. Do you know if Warbases plan to make these hulls etc. more widely available?

Many thanks old chap! I have dropped the suggestion to Martin at Warbases and am waiting on a response. Designing an MDF kit of these would not be difficult and once the plans are in place the end result could be scaled as required.

They are great fun to build though and now that I have the technique more or less sorted would be easy enough to replicate.

Even a basic coat of paint really makes them 'pop', so they should look superb once the final colours are applied. MDF is a sod to sand, especially as the laser cut creates a hard surface which you have to get through first. At least you know now what you have to do moving forward:)

There are a few rigged finishes around the edges so to speak but I have gotten the worst of it away and the paint should serve to flatten a lot of it out. I am making it sound like it is a major problem - it is not really - but you know that even the smallest blemish takes on the magnitude of the San Andreas fault!

I am using enamels for the ‘metal’ parts and acrylic for the wood work. The monitors are currently overall Humbrol Matt 79 whilst the casemates are Humbrol Matt 40 which is the lighter of the two. The Matt 79 is rather like a graphite grey colour which I prefer as I wanted to avoid black. I am torn at the moment about weathering but did consider some Nuln oil, perhaps some metallic dry brushing and some rust but at this stage am unsure as the painting would then be out of synch with the model. I will add flags in due course but at this stage do have any of the requisite type.

Cheers old chap! the serious painting is underway and all have received their base coat grey.

Best I start thinking about the rules I will be using!

These are very impressive models, and the laser cut MDF hulls and turrets have lots of potential.

I hope that we will see them in action in the very near future,

Thanks old chap! I think the next step is to ‘production line’ the process as far as I can. Using pre cut MDF is a huge help and timesaver meaning that I can get models to the table far more quickly.

The first paint is on and I hope to have the models finished over the weekend with a view to getting them into action next week.

I am looking forward to it!

Hi David -
I am surprised that you had such glitches to overcome in the construction. They are NOT apparent in the pictures! I thought you'd had them laser cut or something, their lines look so clean.
Cheers,
Ion

Cracking stuff!
These are not the only ACW ships you have, thought you had metals too!

I think it was about being out of practise and working in a slightly different way that was the problem. It has worked out though and lessons have been learned for future reference.

The hulls and turrets are laser cut but everything else is bespoke.

The metals have long gone and are plying their trade in Germany of all places. I will finish up with around 16 to 20 models for the ACW and slightly more the for the next batch.