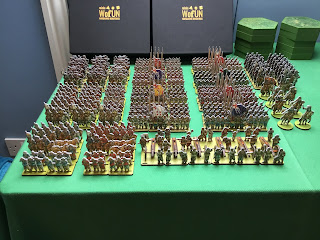 More ECW goodness. At this stage all I am planning to do is to add another couple of guns and (possibly) a Scottish contingent

The second part of my 28mm ECW WoFun order arrived yesterday and, with the exception of a couple of guns, is now table ready for action. I say second part deliberately as I am still pondering the Scottish side of the civil war with the Covenanters, Montrose and the Irish Brigade. The jury is still out on that one but I must admit I am weakening by the day!

The collection you see consists of the following:

To put that into context we are talking about a collection of over 600 28mm figures that are table ready and that work out - allowing for shipping and everything else - at around less than 50p a piece.

Let that sink in for a moment.

It has taken me around three hours in total to press out the figures and bases and to assemble them. That included fixing the artillery rather more permanently and ‘colouring in’ the base edges. Quite by chance I have a really useful Letraset permanent marker which is identical in colour to laser singed MDF. A quick run around the edges and the base is completed. 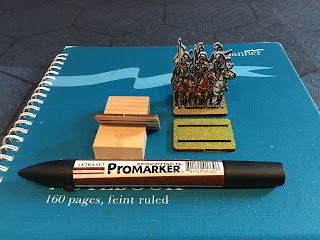 That is my famous edging pen and a selection of bases so you can see the edge issue and how I have gotten around it. Does colouring the edges of the bases in a permanent marker qualify me as a figure painter? (Tongue largely in cheek!)

Note to self: Make sure I order another one of these!

Despite being knee deep in ACW ironclads I have still found some time to think about what I shall be using the ECW figures for and there are a number of options to think about. I rather fancy a hypothetical set up based on a fictional West Country county which will be a lot of fun to do. I have a couple of rules sets to play around with in any event but my most pressing need is suitable terrain. From my stock I am able to furnish trees and possibly hedges but that will be it. I need to source some buildings but at this stage I am thinking about scratch building some representational types - farmhouses or similar. Oh and walls, lots of walls.

For me, and my legendary reluctance to paint figures, the prospect of raising two armies for any period and to be honest, in any scale,  of 300 pieces or so would not even enter my wildest dreams. With this product I am able to do so and so as I have mentioned previously, it is an absolute game changer for my enjoyment of our hobby.

Meanwhile, back to the ACW ships!

They do look pretty nifty Dave!

I am really pleased with them and am itching to get them into action. What I need to do though, is to organise some terrain as apart from trees everything I have would be too small! Having said that, I am thinking about some stylised 2D style bits and pieces.

I liked the 7YW collection until I spotted the wrong positioning of the Regimental and Colonels Colours. Not something I could live with.

There are plenty of alternatives for those who actually paint their own figures.

I am very, very impressed! Sue looked over my shoulder at the photos, and said that they looked great en mass. If she thinks they are good, then they must be!

You are absolutely right about alternatives and whilst WoFun would not suit everybody for me it is a godsend! I like the visual appeal of large armies but really do not enjoy figure painting so it is a good option for me.

Sue obviously has impeccable taste in these matters....

They do look early good en masse and. Am looking forward t getting them into action.

They certainly look impressive en masse David. I hope to see them on the table soon, with whatever ruleset you go for. The West Country campaign sounds fun too!

I forgot about WoFun miniatures. I've been wanting to game Napoleonics but am put off from painting. I'm thinking about ordering them. Also, I like your ACW Ironclads. What's great about wargaming is only you have to be happy with the models. No problem getting ironclads on the game table versus buying, assembling and painting more detailed models.

I have no artistic ability but built an American Wild West Town out of foam core board, cardboard and popsicle sticks years ago in 54mm for plastic cowboy figures.

What a nice looking army. I think they would look even better if the edges of the figures were painted or shaded, but that's just me. To have an oven ready army that can take to the field in a few hours is a real bonus. Do they fit in the boxes when they are based and assembled?

I have a Command and Colours based set (two in fact) which I am looking at initially and of course in time the Portable !7th Century Wargame will feature. the most pressing need at present though is some terrain as pretty much everything I have is a little on the small side.

I am thinking of using Loamshire as the name for my 17th century set up which of course featured in Squire Haggard’s Journal albeit a century later. Tracing the good Squire’s line back to the time of the Civil war would be easy enough to do and a lot of fun as well.

I am pretty much set on adding the Scottish part for completeness and as a result may need to move the location of my fictional 17th century county ‘Oop North’ so as to capture the Scottish side.

Much to think about though!

You are quite right and my approach now is very much around pleasing myself how I do what I do. I have more ships being built - this will be a long runner for me as I have a number of ideas to play with - and whilst they may offend the purist I am nt in the least bit concerned!

I am completely sold on WoFun and whilst it will not replace conventional figures it is a very viable alternative. I am particularly taken with the small table footprint of the figures as it means I can fight massed looking battles comfortably in a reduced space.

I thought about tackling the edges but under natural light they are not quite as visible as in a photograph. I exchanged emails with Andy Callan about this and he does not bother either. It would be a personal choice methinks.

The armies will be living in three box files - four assuming I get the Scots - but the boxes you see are what they arrive in.

Huge units look very impressive David and the figures do look great.Looking forward to seeing what you do with them. Do all those figures fit back into the nice WoFun boxes?

They look a very interesting concept David, especially as they protect the figures.

These certainly look very good on mass David...
Flats aren’t to everyone’s taste... but if they make you happy and you get to play some games... what does it matter.

They would only fit in if you dismantled them all. They would also get into a muddle as well so i think i will stick wit my box files!

I am really taken with the large figure units having a very small table footprint - 40mm x 30mm for 8 infantry or 6 cavalry. It means that you can get a four base unit on a 4” hex which would 32 foot or 24 mounted!

I have the armies and the rules - now I just need to organise some terrain.

You are absolutely correct but it would be a dull old world if we all liked the same things! I really appreciate the convenience these figures offer as well as the ease that one can get large, old school armies organised.

Next stop - into action!

Essentially these are what I. Like to think of as being paper soldiers on steroids! they look great en masse and for me the big advantage they offer is the very small unit footprint.

That EcW army looks so good! The depth of each unit looks great!

Hello there Mike B,

I really appreciate having 28mm figures on 15mm bases - they work really well and suit my preference for grid based games nicely.