Today I have been…. 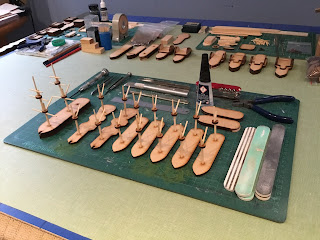 Next steps will be cutting out the flagstaffs, drilling some holes, modelling the pilot houses and then putting it altogether prior to painting.

….mostly packing parcels prior to posting (special mention for tradgardmastare and Aly!) and assembling masts for the remaining ACW ships. Pay no attention to the MDF templates the masts are currently located in as I was merely using these as stands while the glue dried. You can see the hulls the masts will be finishing up on in the background. I have one more ‘full’ mast to build and a bowsprit and then it will be rather a lot of drilling.

Taking a look at some of the earlier models I have a small amount of refurbishment to undertake. These are not repairs but a couple of minor changes. A good example is the pair of Union City class ironclad gunboats. I shall be changing their current pilot houses from the square shape they have to a more accurate looking octagonal one. Strictly speaking these pilot houses should have angled sides but mine will be straight sided due to how the MDF has been cut. At least the overall look will be more accurate looking than previously.

I also want to add some more guns to my version of U.S.S. Kearsage and C.S.S. Alabama as they represent the more ‘modern’ version of the sloop compared to the earlier broadside type.

Whilst in the ACW vibe I gave the rules a further review and have come to a couple of conclusions. To begin with, I am going to revert to my original idea in respect of firing and am also looking to greatly simplify the whole ‘critical hit’ system as it is a little clunky. In either case the changes are really quite minor and in retrospect I think I should have stuck with the original idea but one lives and learns!

I am also more or less at the stage where I can take the rules for an airing using live opponents. I have broached the idea of running a test or two at the club so will look to get something organised as soon as the redraft has taken place which should coincide with finishing the remaining ship models.

It has been a very therapeutic afternoon working on these models once again and I hope that I can continue the momentum. There are some big domestic things coming up that nay well impact on this but hopefully I can keep on keeping on.

I must admit that having a trip to Salute, an evening in the company of Mr Manley followed by spending some time tackling gaming related stuff (‘me time’ if you like) has given me no end of a boost when measured against all the domestic travails we are currently undergoing!

I never thought that chopping up some bamboo barbecue skewers could be such fun!

Great to see you getting back into the swing of things David. I find trips to shows do tend to get the creative juices flowing again, even if only for a short time.

Nice to see stuff on the slipway again!

The shipyards are looking busy with a considerable backlog of orders to be fulfilled! Real life is at times too apt to get in the way of what a man would rather be doing...

I have to say that it felt very good being back in the modelling zone - even if only for a short while!

Absolutely re the whole show thing! The irony is that he remaining ships ordinarily would not have taken very long to build but due to circumstances seem to have taken an age to get this far.

certainly it is full steam ahead for now anyway! There are plans afoot for some other bits and pieces as well....

Real life has certainly had a major hand in things recently for sure! I had forgotten just how absorbing sticking a couple of bits of bamboo skewer together could be!

Your dedication and industry is an example to us all, bravo sir!

Many thanks old chap! Once this batch of models is completed I plan to build some mortar rafts and some barges etc to finish off the floating element of the project. I will need to build some terrain pieces to go with it and then it will be off to Lake Tanganyika during the Great War.