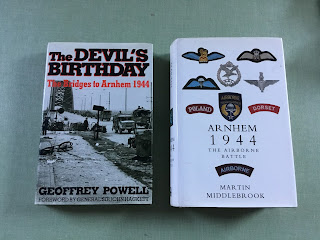 Two titles from my Operation Market Garden library. The Martin Middlebrook title focuses on the  British Airborne part of the campaign

“This will be a story to tell your grandchildren….and mightily bored they’ll be….!”

First of all a massive thanks to everyone that sent their best wishes to us following Gordie’s passing a week ago. Laurel has especially tasked me to thank you all on her behalf.

Over the course of the week I found myself thinking about various paratrooper based conversations that Gordie and I had over the years and so my thoughts kept coming back to Operation Market Garden in 1944. The story of course needs no introduction but it certainly captured my imagination when I first began to read about in earnest following the release of the film A Bridge Too Far in 1977. My imagination was properly fired up when I met Laurel in 1980 especially as Christmas of that year Gordie was coming over from Canada for a visit. I remember being in awe of him (and a little bit intimidated if truth be told!) but I needn’t have worried as he really was a top bloke. I remember we visited the Imperial War Museum in South London and he really enjoyed it (and the beers on the way home!). I have probably mentioned that Laurel’s late uncle, Staff Sergeant Gordon Jenks (whom Gordie was named after) of the Airlanding regiment, was captured at Arnhem. The airborne connection in her family is strong as another uncle served in the parachute regiment alongside Gordie.

Gordie always said that the sheer stubbornness in the face of adversity is very much part of the paratrooper DNA due to being lightly equipped and usually outnumbered by a far better armed enemy. They are trained to fight, and fight hard. He regaled me with tales of ‘milling’, the infamous ‘P’ Company and learning to field strip and clean weapons blindfolded. Endless training exercises and peak physical conditioning were paramount. He was hugely proud of his regiment throughout his life and at age 70 was still down the gym three times a week and completing 10K runs.

Fast forward to today and an idea. I wanted to do something to honour Gordie’s memory in a small way and so found myself thinking about Operation Market Garden once again. I have fought the entire campaign on a couple of occasions - once using the board game Hells Highway as the basis for a Command Decision campaign. It was great fun, as was the Memoir ‘44/MOMBAT based refight I reported on the blog here (and I am surprised it was eight years ago!). 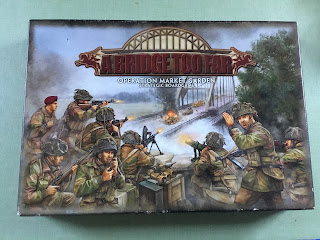 From the Flames of War range 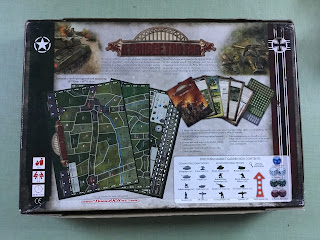 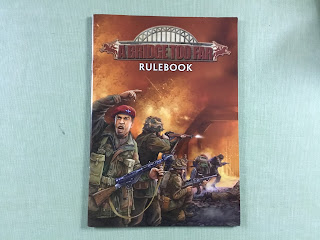 I rather fancy tackling the campaign using the Portable Wargame for the battles and the contents of the Flames of War Firestorm game of Operation Market Garden to generate them. I would use my block armies for the units involved and the whole thing would be highly stylised and representative rather than a strictly detailed refight. It also has the major attraction of being something that can be picked up and put down as required meaning that other priorities can be addressed alongside of it.

I owned a copy of this some years ago but this was disposed of during one of my periodic clear outs. The replacement copy is courtesy of Mr Fox to whom I am extremely grateful.

Gordie was not a wargamer but he would have been keen to know how the British Airborne were progressing in this most famous of battles. He would have quite sure that they would have acquitted themselves well!  I will of course need to rewatch A Bridge Too Far and reread the book - this time it will be a pleasure of special significance.

Fighting this campaign would be a fitting tribute to Gordie.

All power to your elbow to get it done!

It will be very much an 'as and when I can drop it in to the schedule kind of gig' but for sure I will do it.

The previous time I have fought the campaign it has provided some incredibly tense moments in some cracking games!

As Bob has said, a fitting tribute to Geordie and I look forward to seeing how it goes as and when time allows. It's one of those campaigns I want to fight but a lack of painted mini keeps me from starting it, despite having all the info I need. Too many others distractions I'm afraid!

Gordie would have certainly approved for sure! I will be using the block armies and envisage it being very much a 'dip into when I can' type of thing which fits in well with things at present.

I may need to pimp the block armies slightly but will take a view on that soon.

This campaign is on my bucket list for sure