The game was fought using primarily Memoir '44 rules but with Bob Cordery's solo adaptation from his Memoir of Modern Battle (MOMBAT) version. I use the oversized scenario map and the playing pieces from the base game and the Mediterranean expansion.

Rather than a turn by turn breakdown of what happened I will instead adopt the essay route - simply because the game did not seem to photograph particularly well - probably due to the use of the 2D map and hordes of rather unpainted plastic. Also, the sartorial elegance of the British could be called into question as in retrospect, using the 8th army to represent 1944 vintage European theatre troops may have been a mistake....;-) Nevertheless, a few selective pictures are included, to highlight some of the more memorable incidents.

The paratroop and glider-borne infantry had landed and so it was the turn of 30 Corps to start the great charge up to Arnhem bridge. Almost immediately, the leading tank units came under fire from the defending Germans although to little effect. The greatest problem the British had at this end of the assault area was that they were very slow to get going - or rather the dice meant that the infantry was in danger of arriving at Arnhem in advance of the tanks. When they did start rolling the British immediately sent two tank units straight down the road, completely ignoring the defending Germans. 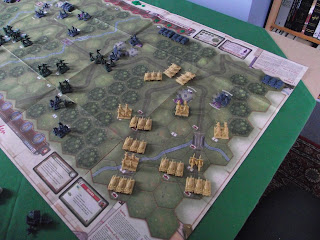 30 Corps on the move with the 101st in action against the Germans near their drop zone and in the suburbs of Eindhoven. The 82nd Airborne (top left) are busy sorting themselves out whilst the Germans reinforce Nijmegen.

The 101st Airborne was quickly in action, clearing their drop zones of Germans, thereby securing their position prior to moving off into Eindhoven. the Germans were disorganised and attacked piecemeal and so were easily driven off by the Americans.

The 82nd landed but took some time to form up (lots of 'armour' dice or 'no order' scores rolled) which allowed the Germans to reinforce their positions prior to the battle commencing - it would be a tougher fight than envisaged.

Meanwhile at Arnhem Bridge, the British successfully managed to not only occupy the town but also to send a unit over the bridge so that both ends were secure. The Germans on the drop zone were speedily dealt with; as was most of the infantry that the Germans were able to send against the Red Devils. The armour however, would be a different matter. 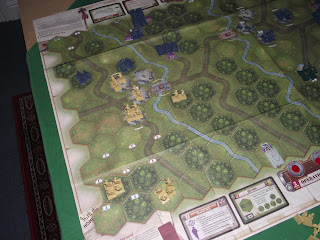 The British in Arnhem - note the unit across the river and the two units on the drop zones at the foot of the picture. The German armour is about to roll!

The leading tank units from 30 Corps managed to travel, more or less unopposed up to the great bridge at Eindhoven with their infantry following at best speed, mopping up Germans as they went. the lead unit engaged some Germans actually on the bridge itself and with a truly inspired dice roll destroyed them entirely - the road to Nijmegen was clear. Although the American 101st was hotly engaged with the defending Germans in the central sector it was touch and go. The gallant paratroopers were managing to keep the road open and were holding their own against the German infantry but the again, the armour would be different matter - as the leading British tank unit found out as it was engaged with disastrous effect by a marauding unit of Panzers. 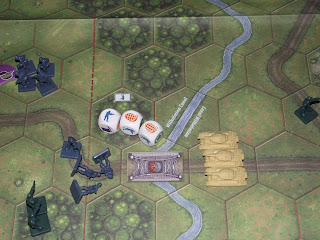 The British tanks make it to the bridge at Eindhoven - blowing the blocking Germans away! 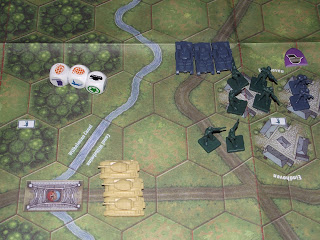 Retribution from the German Armour is swift....

The 30 Corps infantry comes under attack from another unit of German tanks but the Allied breakout is at last beginning to roll en masse. 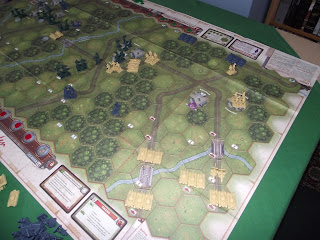 30 Corps struggle to keep moving in the face of numerous German spoiling attacks - note the attacking tanks  at the top of the picture.

The 82nd have been having a thin time of things and are struggling to get into action against an enemy that is rapidly growing in strength. The British airborne are quite settled in Arnhem and most German infantry attacks have been beaten off although with losses. The German armour though, is beginning to threaten - can the gallant Red Devils hang on?

Across the whole length of the battle area the casualties are mounting for both sides but critically so for the Germans. The Panzers have been sent in in penny packets and the infantry have been thrown in as soon as they have been able to, with little coordination and piecemeal. The Allies have yet to secure the Nijmegen or even the Eindhoven bridges although Arnhem is quite secure for time being. 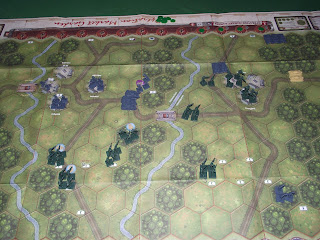 At last the breakthrough is made as the 101st manage to clear their sector of Germans that are immediately available to attack. Likewise, the 82nd have managed to engage the Germans in Nijmegen and have begun to prevail. At Arnhem though, things are about to get a whole lot trickier as the tanks finally put in an appearance. 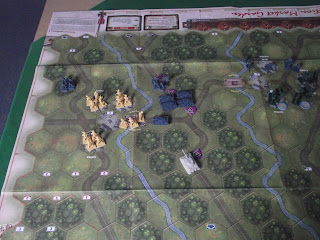 As the 82nd drive the Germans from Nijmegen (top right) in a series of fierce and brutal fire fights the SS Panzers attempt to blast their way into Arnhem.

The Panzers attempt to blast their way into Arnhem itself but despite destroying two of the understrength units of British Paratroops can make no further headway. They lack sufficient infantry to make the attack count and even the imminent arrival of a unit of Tiger tanks makes little impression on the gallant Red Devils. 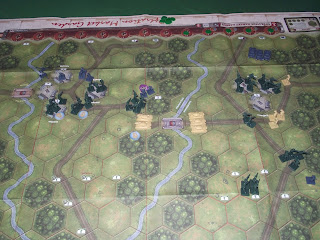 Eindhoven and Nijmegen at the point of being secured - 30 Corps are now able to charge at full speed to Arnhem.

With the fall of Nijmegen the Allies have managed to secure the 13 medals required for victory. The corridor from Belgium to Arnhem is virtually clear so 30 Corps will be able to rush to the aid of the beleaguered Red Berets, thereby securing Montgomery's back door route into Germany.

Perhaps the war would be over by Christmas after all.

I enjoyed this action enormously and would love to tackle this as a pure Memoir '44 game against a live opponent. It was touch and go from the start and it was only the fact that the Germans took such horrendous casualties for little reply that swung it in the Allies favour. 30 Corps and the 82nd Airborne were very unlucky with their activation rolls whilst the British seemed to be unable to make a bad dice roll the entire game. The Germans paid the price for attacking with too little and too often - massing a meaningful strike force may have been a better idea for them but their reaction to having a countryside full of Paratroops this may perhaps have been understandable. The Allies were for the most part concentrated and this is a definite advantage when the shooting starts.

The game did look good. As I said earlier, I still need to refresh myself on MOMBAT and the solo mechanism. I'm also not seeing the areas (left, center, right) in the pictures.

I think for the pictures the use of 8th army figures was good as I don't think I could tell British from American if they were both green.

Bob's solo mechanism in MOMBAT does not use sectors and I assigned dice on the basis of the historical commands as independent forces. It worked out pretty well overall although the Germans were rolling less activation dice in order to capture the ramshackle nature of their response.

My thoughts exactly re the 8th army types - it could have caused all kinds of confusion using all green models!

If only it had been the case

Thanks for sharing David

It was great fun to play but when i get around to tackling it properly it will be a little more detailed.

Glad you enjoyed it though.