Naval news and the delays of the same.... 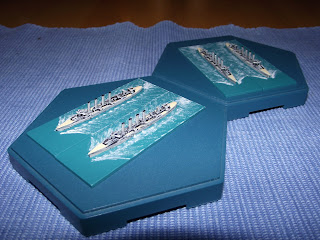 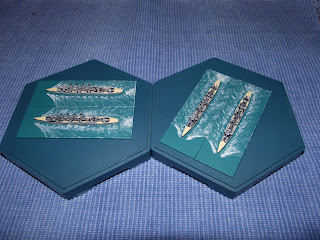 Another view of the above - for details re the painting see below.

Although my nautical posts have been somewhat sparse of late this does not mean that not a lot has been going on. Far from it in fact. To begin with, my Stonewall order has yet to arrive but this has been explained by a problem with one of the moulds finally giving up the ghost and a breakdown in the casting machine itself - all of which has delayed the delivery somewhat. I have taken the opportunity accorded by this delay to change my mind once again about what I am going to do with the ships and so I have reverted to my original plan of splitting the fleets between historical and hysterical farces (and yes, that was intentional!) - namely I shall have representative fleets for the Royal Navy, the High Seas Fleet, Fezia and Rusland. The latter pair will be using the early war kit whilst the former will have the second generation of dreadnoughts etc.

The four cruisers you see above were painted using Humbrol enamels and with a black undercoat dry brushed with various shades of grey (not quite 50 though....). The bases were painted using a tube of Windsor and Newton Cobalt Turquoise which came up far lighter and greener than the colour on the tube suggested. I was after a colour that was as close to the colour of a Hexon tile as I could find and this looked like it was it. It is a little too light but I shall stick with it - it certainly lightens up the ship colour which is no bad thing. I have yet to add the identification labels and ensigns to the bases - mainly because I need to come up with some - so that will also be under consideration. The rules are probably the only thing that is ready at the moment and these will form another post in due course.

I have eight town class cruisers on the painting table which are currently black undercoated and awaiting the grey and I am hoping to get this tackled over the weekend.

The earlier period navies for Fezia and Rusland will be making use of the box of ships I acquired from Dave Ryan of Caliver Books - they being the old Minifigs 1/1800th scale range available once again. These will of course be painted in the correct colour scheme for the period - so plenty of black hulls and white upper works will be in evidence.

The big thing though, will be taking delivery of my order from Stonewall which, all being well, will be during the course of next week.

Looking great! - I really like the contrasting colour on the bases - gives a nice 'pop' against the Hexon background.....

I was rather taken aback when I first painted it and was planning all manner of toning down using inks and goodness knows what else! I have gotten used to it now and whenthe labels and ensigns are applied it will take the brightness down a notch. It does brighten up the ship colours though!

A mighty fine brace of cruisers there, Mr. Crook!

Glad to hear from you old chap! Many thanks indeed - the new technique seems to work very nicely and is very quick. Once the rest of the kit arrives I shall be able to make some telling progress for sure!

Your new painting technique has produced excellent results! They really do look good ... and better than I could have managed.

Damn you sir thy do look good!
I am sticking with my 1/3000 collection but I am totally envious of these little beauties

Sea base variation is a good thing methinks :)

Very nice brace of cruisers there Sir: any Admiral would be glad to have them screening his Line of Battle!

I was very surprised by how easy working the black under coat technique with these models - it just goes to show the old saying about old dogs and new tricks etc!

Thank you on both counts! Very pleased indeed, am I(sorry for the Yoda speak) at how these have turned out and the main thing is the speed at which they can be churned.

Cheers old chap! The RAN will be represented in the shape of HMAS Sydney and Brisbane - possibly the battle cruiser Australia in due course!

For the record I have actually seen sea the colour I have used - but not around the UK!

Thank you very much old chap! Much appreciated!