The battle was fought using Bob Cordery's Memoir of Battle rules for the 19th century on a 13 x 9 hex playing area and using my block armies. The actual order of battle looked like this (the strength points for each unit are in brackets):

The exhaustion levels reflect the fact that the Rusland force is largely a raiding body whilst that of Fezia simply reflects the dogged nature of the Fezian soldiery when dug in - especially when under the watchful eye of Pasha Ali.

The only special rules I incorporated into Bob's set was that each part of the Rusland force rolled its own command dice and that in the event that both sides reach their exhaustion level in the same game turn then the side that has lost the most units at the end of the turn is deemed to have lost the battle. 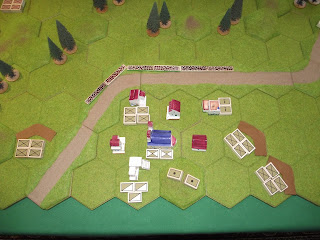 Firmopoly at the start of the action - Pasha Ali is coordinating the defence from the centre of the village. 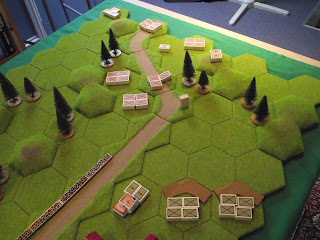 The Rusland Northern attack gets under way and the leading battalion has already been pushed back with losses from Fezian machine gun fire. 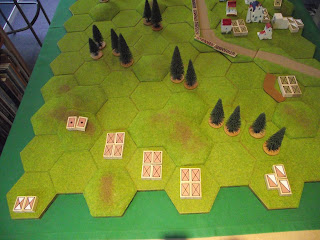 Meanwhile in the South, Pullitov urges his men forwards with the infamous Cossacks in the van. 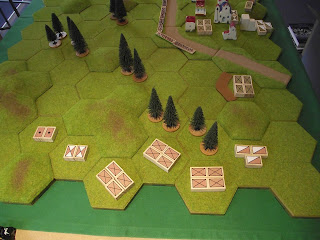 The Southern units move into position, careful not to spring the trap too early. The unsuspecting Fezians are only concerned with the action in the North. 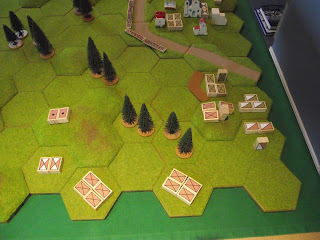 With a massed cry of 'Hurrah!' the Cossacks and the leading infantry charge into the attack. The Fezian cavalry countercharge and inflict casualties on the Rusland horsemen whilst the infantry fight is poised in the balance. 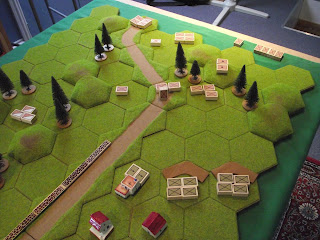 Meanwhile in the North the main Rusland force struggles to deploy into attack formation under fire from Fezian machine guns, entrenched infantry and artillery. Thus far the Fezians are holding their own and the Ruslanders are unable to make headway or use their superior numbers to any effect. 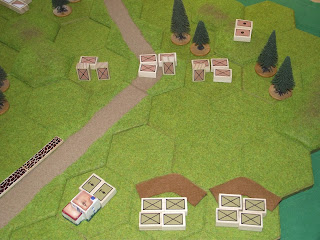 As fast as the Ruslanders deploy into attack formation so the Fezians shoot them down - casualties are beginning to mount. Can the surprise attack in the South succeed in time? 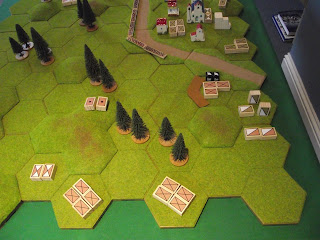 Then disaster strikes the Fezians! The entrenched infantry, with Ruslanders charging down the hill at them and with their own cavalry being hotly engaged by the Cossacks suffers a collapse in its morale and abandons its position! The Rusland infantry need no urging to rush into the position formally occupied by the Fezian infantry. The gateway to the South of Firmopoly has been opened. 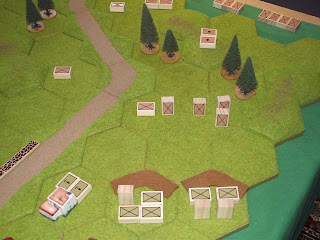 In the North the Rusland infantry attempts to unsuccessfully force the Fezian trenches, aided by their artillery which is now in position. Still the Fezians cling on but casualties are mounting. 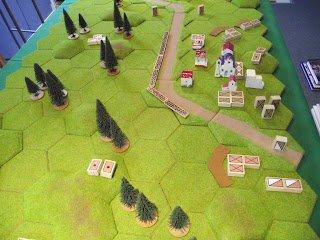 Bereft of the protection the trenches offer the retreating Fezian infantry attempt to fall back into Firmopoly but are caught in the open by Rusland rifle and artillery fire and destroyed as a fighting unit. The Cossacks overcome the last of the Fezian cavalry as another Fezian infantry unit moves into position to stem the attack. 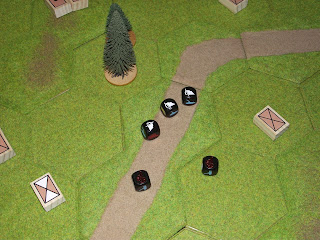 Disaster in the North! Perhaps stunned by the rapidly mounting casualties the Commander of the main force fails to order a single unit except for his artillery. The battered infantry in the centre remain halted and stoically await their fate.... 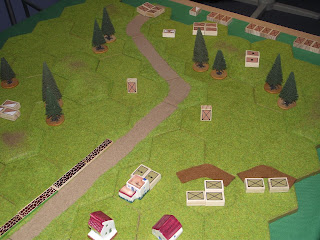 ....They did not have to wait long and the end was as swift as it was merciless at the hands of the battered, but unbowed Fezian infantry. 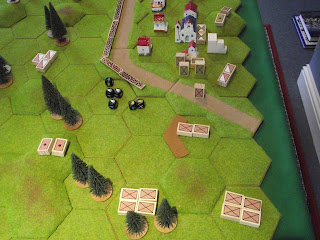 In the South of the village a gallant unit of Fezian infantry found itself assailed by artillery, Cossacks and infantry and despite driving off the Rusland infantry with losses, was overwhelmed and destroyed. 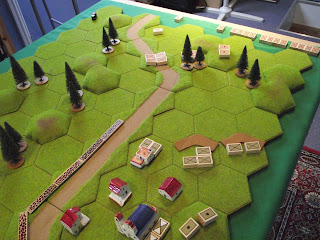 In the North the Commander seems to have regained his nerve and two fresh battalions of infantry move up to assault the Fezian position. This time though, not only are the defenders tired and weakened but the attackers are remaining just out of range, in effect pinning the Fezians in their trenches. All the while, the Rusland artillery continues to batter the trench line. 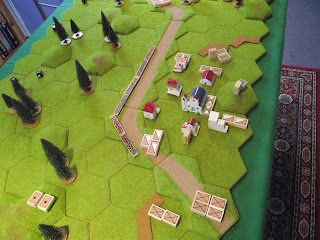 Endgame. In an attempt to stave off defeat Pasha Ali moves a unit of infantry out of the Northern trenches to bolster the defence. It is too late. The second unit of Cossacks breaks into the town and the Rusland artillery engages the Fezian guns on the hill. The last of the Southern Fezian infantry is put to the sword and the Rusland infantry under Pullitov head for the village at top speed. 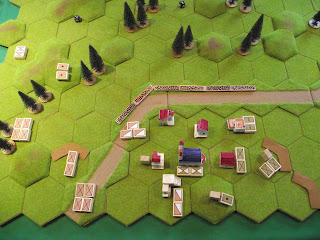 With the defences in the South breached and the Northern trenches undermanned and battered by artillery it is only a matter of time before Firmopoly falls. With a heavy heart Pasha Ali offers his sword to Count Pullitov and surrenders. Firmopoly has fallen.

The Rusland Northern attack struggled with a succession of poor command rolls and so was quite laboured. As a result many of its units were targets for most of the game and unable to reply to their Fezian tormentors. Once the artillery was in place this helped enormously and so the Fezian infantry in the trenches were gradually being worn down over the course of the attack.

The Rusland Southern attack went off pretty well although also suffered from some poor command rolls. Luckily the artillery was on hand to help out and the morale collapse the Fezian infantry suffered (two flag results - they could ignore the first but had to use the second) was also a significant factor which the Ruslanders exploited gleefully.

In both cases the uncommitted infantry units (four battalions in all) would be able to swiftly move into Firmopoly and ensure that any resistance was overcome.

The Fezians did all that could be expected of them really although a bolder commander may have tried to drive off the Southern attack whilst the Northern assault was stalled - as Pasha Ali later dryly observed, Napoleon may well have thought of such a thing - the strategy of the central position - but he was no Napoleon.

Count Pullitov was decorated for his exploits but passed over for promotion initially due to the number of casualties his force suffered and how close he came to defeat.

Of Firmopoly itself after some routine ransacking and looting (especially by the Cossacks who were extremely keen to get into the town for this very reason - not from any sense of martial necessity!) the Rusland army fell back to the frontier and home. Pasha Ali was paroled and feted as a hero across Fezia for his gallant stand against the might of Rusland. He was recalled by the Sultan, awarded the Order of the Golden Heron, and is now a military adviser.

I am sure we will hear of these worthies again in due course but for now it is enough to know that whenever men speak of war and martial prowess the great battle of Firmopoly is sure to come to mind.

My thinking was a little confused at this point. Pasha Ali was of course feted as a hero but also received highest honour that can be bestowed upon a Fezian - the Order of the Golden Heron so you can see my confusion.

All the best and very well spotted.