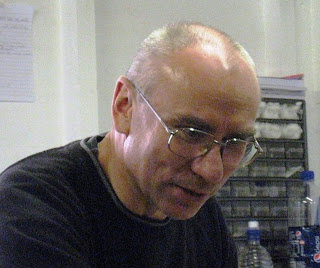 Firstly - a great St. Patricks Day to all of Irish extraction (I have just watched Jack Taylor so am well up on the 'craic' with matters Irish - actually no I am not but hey ho - the wishes are there with the best of intentions!).

Today has seen yours truly at the Skirmish plastic soldier and wargames show at Sidcup in Kent. It is a small show to be sure (sorry, lapsing into mock Irish again!) but is a good one for all that. There is more than enough to be look at in terms of games, a bring and buy and the essential trade. I met up with Bob Cordery and Big Lee and also Postie Stu from the legendary Posties Rejects and so the banter was bang on the money!

I took no pictures but managed to learn a lot about the art of photographing games from Bob (many thanks old chap - I promise not to mention the Chaco Wars again...) and so will be experimenting with some ideas later. Big Lee was looking for not a lot in particular but was sure that something would receive the benefit of his wallet in due course! Bob missed out on some bits he was after  (I will email you off list for a solution to that particular problem) and Postie had not flashed the cash as yet when I left (without saying goodbye, for which I can only apologise!). It was good just to mix it with kindred spirits - and I am looking forward to the various Rejects blogs for what sounds like a real hoot of a game they had!

I was able to hit the plastic kits in a big way and managed to acquire some Armourfast early T34s (2 boxes), some Hanomags (again, 2 boxes) and a box of the 105mm German Howitzer. I also manged to (finally) get a hold of 2 boxes of the Pegasus Hobbies BT7 tank - for which grateful thanks must be extended to Postie.

So all in all it was a great day out and my Middle Eastern project has received some valuable reinforcements.

I also now have a rather unusual choice of 20mm plastic figure to consider for the Turkish army of WW2 - more of which later.

I didn't think it was worth pushing my luck after the Reject game on Saturday, so instead of the show I went shopping for new curtain and cushions!! Oh the joy!!!!

Think of the brownie points you have accrued though - very important with SALUTE just around the corner.

It was a great show and if Big Lee is anything to go by then the game was good fun as well and I am looking forward to reading the reports.

So am I but it will be a while away yet as I have the small matter of rather a lot of ships to paint first!