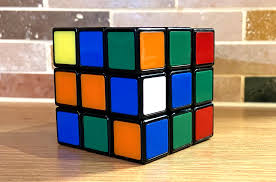 I had one of these ‘back in the day’ but never solved it, not even by peeling the stickers off and rearranging them BUT, from the shape of this humble device has sprung a number of ideas….

Now I am not for one minute suggesting using a Rubik’s Cube for a Fast Play 3 x 3 Portable Wargame but read on to see how I came to this extraordinary idea!

On the ground or sea level if you prefer, the footprint of the 3 x 3 variant of the Portable Wargame is, well,  3 x 3 squares. Now flip that on its side and you have a vertical playing area of 3 x 3. The point I am getting to is that but looking at the 3 x 3 area as a kind of Rubik’s Cube shaped playing space you can open up the system for all manner of 3D fun as you would effectively be using 3 x 3 x 3 or 27 spaces instead of 9 on the ground.

Initially I was thinking about naval air attacks. The target ship would typically occupy the very centre of the playing surface whilst the assailants (and of course any defenders) would occupy the remaining areas, jostling and jockeying for position whilst trying to avoid AA and enemy fighters etc. By factoring in three vertical levels - let us call them low, medium and high - you can more effectively represent air assets and the defensive AA capability of the target. Having the three height levels also paves the way for pure air to air combat as well. It is certainly an idea I will explore further at some point as I am fond of aerial games but once again, the compelling need to mirror specific rather than generic types will mean it may take slightly longer to achieve.

It would not be a massive stretch of the imagination to employ a similar system in deep space so Star Wars, Star Trek and others could make an appearance as well something Victorian Science Fiction based - Martian cloud ships, ether flyers, Aeronef and similar. One could even take the system undersea - substituting height for depth levels.

These are all viable ideas as far as I am concerned but for now my main priority is to complete the ironclad set and the expansion that will take the rules up to 1905 (these have not even been started yet and exist merely as a couple of ideas scribbled on a scrap of paper).

Sigh….So many ideas and so little time - I really need to retire!

Bingo! I think you have it sir!

That is exactly what my doctor said….and I am still taking the tablets and putting the cream on it….:-)

For a wild moment there, David, I thought you might have been going for 'Planet Rubik', divided into four 'equatorial' regions, and two 'polar'. Of course, it would be a very small planet, planetoid, asteroid... thing. It took me a while to see the air-power, 'beware the Hun in the top tier' thing. So: surface fleet, and low, medium and high altitude.

Or, if you so chose, the surface fleet would be on layer two, with the subsurface layer being reserved for submarines, submersibles and giant squid. Did someone mention 'Nautilus'? The upper tiers, low and medium, would be the environment of balloons, zeppelins and Louis Bleriot... Not to mention pteranodons, dragons and flying gryphons.

It appears that your mind runs along similar trains of thought to mine - which may or may not be a good thing! There is certainly plenty of mileage with the concept and I really like the fact hat it encourages clear thinking - both about the rules and actually fighting a battle.

For air battles it would make sense to use flights of aircraft as the tactical unit rather than individual types so that ranges and movement can be confined to the playing area yet still leave room for basic manoeuvres - climbing, diving and turning. I have a few ideas for this but need some time to get something concrete organised.

So many projects and ideas, so little time!