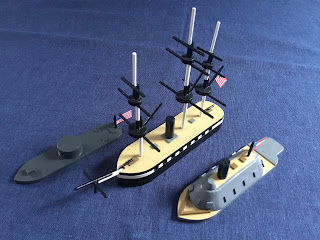 The models to be used in the first test - U.S.S.Monitor, U.S.S. Minnesota and the C.S.S. Virginia

Following on from the last ACW naval action I fought I was able to get the first draft of the rules sent to my trusty play testing crew - hereafter known as Agents X and Y (at least until the rules are hopefully published when their true identities can be revealed to the world). This has proven to be an enormous help as I have already had much in the way of constructive feedback and so have incorporated a whole heap of amendments into the text. For the record these were for the most part requests for clarification or suggestions as to where certain things could be put - the lack of cohesion coupled with an anarchic sense of order seemed to be the main issues although the odd typo had surreptitiously crept in!

The proof of the pudding though, is in the eating, or in this case the playing! With this in mind (and at the suggestion of Agent X) I shall be taking part in a Zoom battle against one half of the team next Wednesday evening which I have to say I am really looking forward to!

I have been thinking about the scenario for the test and reckon that revisiting the second day of Hampton Roads would be a good shout - the number of vessels is very low - U.S.S. Monitor, the grounded U.S.S. Minnesota and the C.S.S. Virginia - so it means that we will be better placed to stretch the rules.

I shall try to record the action but given that I shall be using my iPad for the Zoom part it means that I will need to use my phone for the pictures. No matter, I am sure it will turn out fine - he says, more in hope than expectation!

Assuming all goes to plan then I would be keen to move on to something a little more ambitious (aka larger!) at a later date. In the meantime though, and thanks to the excellent work of Agent X (Agent Y is busy picking over the nuts and bolts of the rule mechanics) I have undertaken a fairly substantial tidying up exercise of the rules and how they are set out and it certainly looks a lot more logical in terms of layout.

The biggest challenge I have though, is really all about the graphics. Inspired by the work of Agent Y, who very kindly sent me a suggested format for the firing arcs, I have been able to more or less complete the orthogonal firing arc diagram - now there is the diagonal to consider which will be rather more tricky methinks.

In the meantime though, it is back to the shipbuilding and once again extending my grateful thanks for the sterling work of Agents X and Y!

I must say David that I really like the way that you have developed your method of ship construction from MDF 'slices' works a treat. Rules also coming along nicely.

Thank you old chap! The MDF ‘slices’ work well and are pretty much my standard for hulls. They tend to come up quite solid looking but the thing that has amazed me is how such simple models can look really good at normal table distances. I am looking forward to setting my 6ft by 4ft at some point for a large scale game but that will be a while away yet.

The rules are coming along nicely and the last of the models are under construction - at least the ships are - although I have some terrain bits and pieces to sort out.

It is all looking good although not as far along as your Crimean project!