Of Wind and Water…. 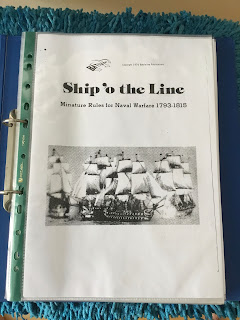 The set that morphed into Avalon Hill’s award-winning board game: Wooden Ships and Iron Men. Many happy hours were spent gaming using these rules and I still have the scar to prove it….

Now that the light is definitely at the end of the tunnel (and no, it not someone walking towards me with a torch!) in respect of the ACW naval project my thoughts have been looking long and hard at what comes next, at least as far as warships are concerned. I am rather spoilt for choice and indeed, the challenge is choosing what to do from the vast array of options I have available. Post the ACW I plan to tackle the War in the Pacific as this is something that can be organised relatively easily and will only require a dozen or so models. After that it will be whatever takes my fancy but there are a couple of options I am looking at and have mentioned previously.

Predreadnoughts will feature at some point but I am unsure about the best way of tackling this, hence the lack of urgency. I am tempted by the  full on imagi-nation option but am mindful of my plans for Madasahatta. It would make sense tying in what I decide to build with this project rather than making ships up as I go along - I certainly would not want to be building effectively a pair of quite similar collections - one historical and one hysterical!

I am seriously looking at Lake Tanganyika and East Africa during the Great War. This has the attraction of being fairly compact in terms of numbers and it will allow me to tackle some something a little more mainstream - I am referring of course to that naval wargame staple of the ‘hunt the raider’ scenario. Plenty to ponder there and to be honest given the potential size of the Madasahatta undertaking, it would make sense to think about East Africa first.

How often does ‘sense’ feature when planning a wargames project?!

Another option, and to be honest this was a relatively late entry into the lists, is something from the age of sail. Inspired by the building of the assorted fully masted warships for the ACW project, I rather fancy tackling something from the age of sail - in this case the Napoleonic era - but am currently undecided as to what to do. One of the options I am considering involves the lower level stuff - frigates and smaller - and would feature combined operations. In 20mm plastic Hat Industries produce such things as Royal Marines, ships crew and naval artillery and if looking at the Spanish peninsular there are also Guerrillas  available. Raids on the Eastern and Southern seaboard of Spain would be fruitful field to explore and would give me the chance to tackle some Napoleonic land actions as well as on the high seas.

The ships themselves would be straightforward to build once I have the hull template organised. Naturally this will be a little more detailed than those for the ACW but I am keen to work to a similar looking ‘simple’ style. Sails should be straightforward enough and indeed, when I met up with Martin ‘Warbases’ Murray at Salute last year he mentioned that he would be able to produce these as required - all I would need to do would be to specify the shape and size. Painting ‘chequerboard’ gun ports etc would be simple enough using the pre cut hull template technique I used for the frigates and sloops of the US civil war navy. The stern galleries I am still thinking about but I have a couple of ideas to play around with. Similarly the ornately painted bows of the period have given me pause for thought but again, I think I have a workable solution. Overall the models will need rather more work than the ACW types but with careful forethought the same building technique of layered MDF should work well enough. 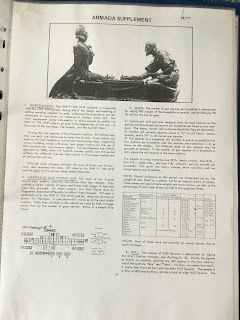 The original rules also contained a supplement designed for use with ships of the Armada period. My thanks to Mr. Fox for the copy of this.

As far as rules are concerned then my ‘go to set’ will be Ship ‘O The Line although I am already thinking about a stripped back version - mainly to avoid the whole order writing thing. There are other sets available and ironically my number one choice really works better with squadron sized engagements of larger ships (hence the title) - smaller ships tend to be rather too small in terms of effect.

There is also a very handy Armada period supplement so if I fancied chasing down Spanish Galleons etc at least I would only need to learn a single rule set although Galleys and Galleons works really well for this period.

Yes, I have been thinking about ships for this period as well…

If you're looking to smaller operations involving units smaller than ships of the line, you might comsider operations in the West Indies, around India, or, one of my favourites, operations around Mauritius. For a semi-fictionalised account of the last, you might like Patrick O'Brian's 'The Mauritius Command'(in my view the very best of the Jack Aubrey stories).

The account of the battle of 'Ile de la Passe' I long thought was simply made up, based on Algeciras, but with frigates. Nope: it really did happen, and really had that result.

The thing about Patrick O'Brian, is that he wrote literature - superb writing that doesn't insult the reader's intelligence. His stories are as much character driven as plot driven. He does good battles as well.

There is plenty of ideas there - many thanks indeed and guess what? Mauritius is awfully close to Madasahatta….

I have promised myself that I will read all the Patrick O’Brian series at some point - I have not read any this far, a shameful and embarrassing gap! - and in chronological order. My friend Mr Fox is a huge fan of the series and for the reason you mention. I did enjoy the film Master and Commander which I understand was very much a composite story but a great watch nevertheless.

This project is still some way off as there is an awful lot of stuff to tackle beforehand but it does not hurt to have it in one’s pocket.

David -
'Master and commander' the movie. I can not forbear to say, I thought the movie a hatchet job: a complete and utter butchery. On a scale of 1 to 5 stars, it barely rates a 1, for mine. On several grounds. Why on earth did they find it necessary to make TWO novels into one movie? Master and Commander was worth a 3-hour movie in its own right. The casting was pretty woeful as well, but I won't go into that, except that whoever cast Russell Crowe as Jack Aubrey and Billy Boyd as Barrett Bonder (presumably on the grounds of alliterative initials - I can think of no other reason) deserved to be an executee in an execution.

Suffice to say, you will find 'Master and Commander' the novel a far, far cry from the movie. For one thing, it takes place entirely in the Mediterranean Sea. Spoiler alert: it does feature the Battle of Algeciras...

I always tend to view films as being for the most part a thing apart from the book upon which they are based and so in that sense it works as a representative entertainment for sure. You are not alone in comparing it unfavourably with the book(s) - my friend Mr Fox is particularly critical for the casting of the good Doctor.

I rather liked Killick though!

Interestingly enough the musical ditty at the very end of the film recently appeared in a ballroom scene in the TV show Sanditon.

I would sum the film up as being a little like the proverbial curate’s egg but it was entertaining all the same.

To each his own - and I agree that the story in video form is not the same thing as the story in book. And yet... I have an idea that Sanditon the TV series is unlike Sanditon the unfinished novel, but I rather liked the show. Rose Williams is a little sweety, don't you think?
Cheers,
Ion

As a standalone film about a fictional episode set during the Napoleonic wars Master and Commander works is fine - but shoehorning two books into one and with all the problems that will inevitably bring about ‘missing bits’ to characterisations is never going to end well!

I suspect that Sanditon has exhausted elements of the unfinished novel and is now moving into regency romance territory! I have not read the book but the show is shaping up into one of those period dramas that look good, has some interesting characters and with a storyline that is not overly taxing. It is great fun and feels almost Dickensian (the closest I have read to Jane Austen!).

Rose Williams is really good in the part.