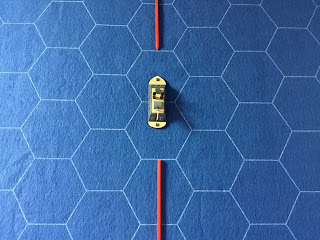 No, not a laser armed City class gunboat (U.S.S. Carondelet) but an early picture used to illustrate the forward and aft firing arc as used in the rules. I am no longer using this particular image as I have improved the method for illustrating the firing arcs somewhat.
It has been a busy week with work and the home front but I have still managed to chip away at the ACW ships and the written material supporting the rules. The latter still have a final piece to be added - essentially a walk through example of play. Originally I planned to include examples in the relevant sections but at a rather late stage have opted to go down the walk through method. Essentially it manages to capture certain facets of the rules in a game context rather better than isolated incidents.
I am working towards this work being published as part of Bob Cordery’s Portable Wargame stable in time for Christmas and am confident that all will be ready soon.
The current batch of models are ticking along nicely with two being virtually complete and a further four merely needing some further paintwork. Of the five that will follow, two merely need some additional paintwork whilst the other three need rather a lot more although they are ready to complete. Once they are done I am really at the last stages. There are seven models at this phase of which four have been started and a mere three need building from scratch. Of these three one is an additional City class ironclad gunboat - I already have a pair but wanted an additional one to strengthen the Union river fleet.
In summary then, over half of the remaining models under construction for the collection are close to a tipping point in terms of readiness. The first six of these will be appearing on the blog very soon.
In other News….
Just as the wet room was completed (we have had the en suite bathroom converted into a wet room which is a whole lot more convenient for Laurel) so the central heating boiler decided that it had had enough and promptly expired. In fairness it is around fourteen years old and has had a problematic and injury prone history. It will not be missed and so the replacement will be installed next Monday. Whilst inconvenient we are lucky that the weather is not too chilly at the moment although should the temperature drop too much we have a couple of free standing heaters we could use if needs be. Hot water is not a problem as we have an immersion heater - used sparingly as these are expensive to run.
Needless to say the imperial treasury has taken a bit of a hammering of late but these things happen!
Posted by David Crook at 08:19