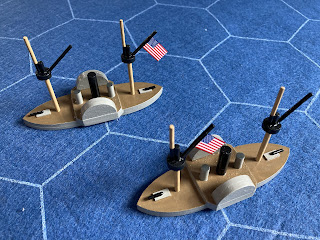 The pair of ‘double enders’ - for identification purposes I have placed the flags in different places! 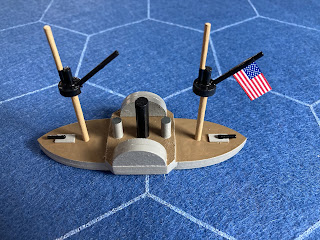 A better view showing the overall configuration of the type. I have seen images where the funnel was located further forward meaning that the design was not entirely symmetrical - I think I prefer this version although the location of the masts will be a giveaway as to which way they are travelling!

Aside from getting to SELWG yesterday I was also able to finish another pair of models for the ACW project. These are the famous ‘double ender’ gunboats that have enjoyed a somewhat chequered history as part of this project!  If you recall I had to order the appropriate hull shape from Warbases as the original models used my standard template - for the non nautical types this was pointed at one end and rounded at the other! - which did not look right. The original pair of models will now be completed as something else.

In common with many ships of the period the pictorial evidence is often contradictory. This makes life easier for me as it means I can quite simply go with whatever ‘look’ works best and so once again the pair of models above are ‘based upon’ rather than museum quality offerings.

The most famous of this type of ship was the U.S.S. Sassacus.

I enjoyed building these two and so without pausing for breath it is on with the next batch - another pair of gunboats, this time converted civilian types for the Confederate Navy.

I am also more or less at the final stages for the published version of the rules. I need to get some pictures organised and then the stage will be set for the battle report that will feature. I have something in mind for this but need to finalise the details first and then find the time to fight it!

Those are looking very shipshape and Bristol fashion, Mr Crook :)

Thank you kindly sir! I suddenly have this uncontrollable urge to build the C.S.S. Livingston….

BTW, I noticed the Pithead model of the Morgan and Gaines - they look different again from everything else I have seen!

Thank you Sire - much appreciated as ever! There is a rather strange looking Confederate ship on the list to be built - I just need to go through the supplies to see if I have the right parts for it….