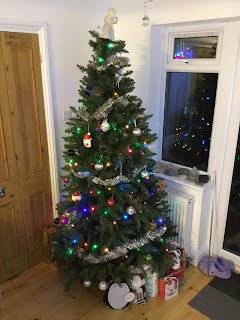 The tree in its customary position - still more prezzies to go underneath!

It is a curious feeling. All the text for the Portable Ironclads Wargame is being edited and there are only another dozen ships left to build and then, for now at least, it is done. It has been my constant companion for over two years - at least this version has - and I know I need to draw a line under it and tackle something else. Therein lies the problem. I have so many things in various stages of planning that it is difficult to decide which way to go and for me that means the likelihood of a poor decision being made!

If I am honest I think my immediate ‘post ironclad’ aim is to really get some games in. I am not fussed as to which as I feel as though I need to binge on a wide selection of stuff to gain a recalibrations of focus. I will set some boundaries though - to start with I will not be looking to start anything that is new, new!

I have more than enough ‘stuff’ to work with so all I need to do is to ‘shake the snow globe’ and see how this settles down and in what direction. I do not feel the urge to explore anything outside of what I have already set down previously but I do need to work out the best direction to take in whatever direction I end up taking.

In the meantime though, preparations in Maison Crook for the festive season are under way and so the decorations went up last weekend. The Memsahib assisted with the tree from her chair - she has to rely on that and her frame as standing for long periods is very taxing for her. It is nearly a year since her surgery and needless to say it has been a long and tiring, painful and stressful time for her and the adjustments to most areas of our lives have been far reaching. The overriding concern is how much she will recover and how long it will take. She was supposed to have a consultation with her neurosurgeon last week to see how things are against the plan but this has been cancelled and rearranged for a later date.

Work has been insanely busy and I an also suffering from a miserable head cold so am looking forward to using up some holiday time later in the month. In fact I am off from 15/12 until the new year so I hope to recharge and refresh the brain cells for the new year.

I am signing off for a couple of weeks, only until I have some news about the Portable Ironclads Wargame, and then it will business as usual.

See you all soon!

It needs some toy soldier snipers in the tree.

No snipers but I have seen a Death Star Christmas bauble that would be a good addition!

All the best for the forthcoming festivities and look forward to seeing what projects you go for.

Have a great Christmas matey. See you on the other side.

A Death Star bauble now your talking.
For what’s next go for the low hanging fruit, what’s a quick hit to get on the table but also doesn’t demand loads of time to prevent gaming?
The road to recovery can be most frustrating as I’m finding out, I hope your wife can really, enjoy Christmas and let’s hope we can all look to a better 2023.
All the best

Somehow it just doesn't feel like we're in the run up to Xmas yet chez moi. Our son is getting excited though and we put the tree up a week before the big day, to try and keep some semblance of balance to our lives!

David -
To reprise a little verse I knocked together nearly 7 years ago...

All the very best to you and your wife, David - have an excellent Christmas. This time of year always reminds me that my Liverpool granddad is reputed to have heated pennies on the bars of his coal fire, to give to visiting carol singers. How we miss those charming old traditions...

And you old chap! I am unsure what to tackle next but I have no shortage of things to think about - the trick is to ensure that I do not get involved with anything that will require the Imperial coffers being opened!

I will be posting to the blog before being buried under Christmas food and drink and rolls of wrapping paper - hopefully with news of the book! Have a great first Christmas (well of this stint anyways!) in France old chap!

It has been a very trying year for sure for us and for you so yes, absolutely, let’s raise a glass of something to a better 2023!

My usual ‘low hanging fruit’ tends involve the block armies so I may tackle something using them.

We usually get the decorations up the last week in November or the first week of December - it is a weekend job. Funnily enough it was the first time that Laurel and I had put them up by ourselves for a good few years now.

I am looking forward to the long break as I am feeling rather worn ou at present, and the cold does not help.

That is a very apt piece of penmanship old chap! Very true indeed.

That sounds like a quaint custom, rather like sending children up chimneys or similar! Have a great Christmas old chap - I like the new WSS Germans.