Reaching for the Skies…. 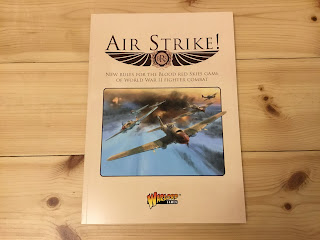 I saw the original version of this a couple of Salutes ago. I never picked up on it at the time but following the hefty discount offered for the Air Strike edition by Warlord - £25 including a box of Spitfires and Me109s - it was a temptation I found hard to resist.
I have long enjoyed playing aerial wargames of one kind or another although for the most part these have been using hex and counter set ups - Air Force, Dauntless, Richthofen’s War, Wings, Ace’s High and Air War. My biggest foray into using models was undoubtedly via Axis and Allies: Angels 20, and at the time it was a huge amount of fun. The models are 15mm scale and so visually it was pretty impressive to look at and worked well for fighter level plane to plane combat.
More recently I have been thinking more about air combat from the perspective of formations - sections and squadrons etc. The board game Wing Leader: Victories covers this but to be honest I really fancied using models in some way.
Enter stage left, Blood Red Skies, produced by Warlord Games.
I rather like the look of these for a number of reasons. To start with the scale works well - they are very much formation driven but with the all important individuality so important for the budding fighter pilot. The rules lump all manner of manoeuvres into a rating for agility and use the concept of advantage/neutral/disadvantage to determine how the games work. Advantaged planes act first and only disadvantaged planes can be shot down. There is a whole raft of plane, pilot, theatre and nationality related traits that impact on how the aircraft work within the game - the all important ‘feel’.
The models, at least those I have, the aforementioned Spitfires and Me109s, are a little disappointing. They are cast in a resin like material in 1:200th scale and whilst the detail is not bad - certainly good enough for me - there are some issues with warping with the wings. Of the models I have warping in a single direction is not the end of the world but when it is two directions - on the same wing - it is a whole new world of pain.
To be honest I rather fancy tackling this using 1:600th models so will be taking a long look at Tumbling Dice for inspiration (and probably a dent in the wallet as well!). Using models of that scale will necessitate using a different basing arrangement together with copious numbers of dice frames.
The Airstrike rule book contains the original rules as updated along with revised scenarios, additional rules as well as the Mig Alley supplement for the Korean War.
As a side hustle Blood Red Skies has much to commend it. I will not need very much in the way of material - I am looking at the Battle of Britain - and painting the models will be very straightforward in the scale I am looking at.
Something else to ponder then….
Posted by David Crook at 18:50

Tally ho! It looks like a great air combat game!

For a variety of reasons there is an awful lot of stuff here that could be, ahem, Portable Wargamised - so no prizes for guessing what I am looking at….

I have never done aerial wargaming but always like the though of a small WW1 project, one day maybe. Looking forward to seeing more of what you do with this project, shame about the resin planes not being the best quality, I have had a look at Tumbling Dice products and they do look very decent indeed.

The rules have sufficient flavour for me without being hugely complex - as some aerial games can be. For preference I would have liked hexes but I reckon there is room to customise it to suit.

Tumbling Dice have a great range of aircraft available for sure!

Models aside the rule system certainly has some potential - in its own right and as the basis for a hexed based version developed by yours truly…..

I see this as a kind of ‘restrained rabbit hole’ in a way in that I know what I want to do but at this stage am uncertain of the best way of doing it.

(Images of scenes from the film The Battle of Britain swirling around in my head….)