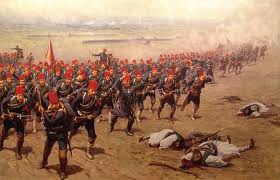 1877 Turkish infantry advancing
I am writing this post whilst still recovering from what can only be described as an overwhelming act of generosity. Most wargamers in my experience invariably acquire more in their collections than can be readily translated into armies or navies to use on the table top - the dreaded 'lead mountain' of much humour and banter. Even the most disciplined among us have fallen foul of this magpie-like tendency to acquire more 'kit' than can be realistically made use of at some point and the usual end result is the ignominious offloading of the same at the next available Bring and Buy or sold at a hefty discount to gaming acquaintances or even via Ebay. I have  happily acted as both benefactor and beneficiary over the years and fully expect this to continue as my own particular Wargaming Odyssey meanders ever onwards.

Yesterday evening I was in the role of beneficiary (and benefactor to be completely accurate) and I am still staggered by that which I had received. The sheer scale of my unbelievable good fortune has left me, rather unusually, somewhat at a loss for words.

My very good and long term friend and occasional wargaming nemesis, Chris Hardman, has passed over to me his unpainted 15mm collection of Pioneer Miniatures 1877 Russo Turkish War armies he acquired umpteen years ago and that have lain forlornly in his garage ever since. There are figures for both armies and when I say that the weight of the carrier bag full of metal he gave me weighed a shade over nine pounds you will perhaps have an idea of just how much kit we are talking about. I have not even begun to start sorting this lot out and aside from a quick glance in the bag have yet to see what is there other than to know that there is more than sufficient to keep me occupied for some time to come and then some!

This extraordinarily generous gift has given me the opportunity to tackle a 19th century campaign that is a little off the mainstream of the more usual American Civil/Franco Prussian/Colonial set up (not that I have anything against any of those!) and that for me personally is in an area of particular interest. I am two thirds of the way through reading Czar and Sultan by Archibald Forbes and so the timing of this early Christmas present could not be better if I had planned it myself!

It has given me much food for thought and so here is the (revised) plan. I shall build up the armies for 1877 on an historical basis and will tackle the naval side in the same way - possibly using Houstons ships or, more likely, scratch building the models. The respective armies I an tackling for 1890 will double as those of Fezia and Rusland and the Minifigs ships will provide the naval element. I will scope out the details fully over the weekend but as it stands at present the only completely fictional aspect of the whole 1890 imagi-nation will be the navies.

In closing I would like say an enormous thank you to Chris for this act of generosity - I am most certainly in his debt in a big way!
Posted by David Crook at 06:18

The generosity i often encounter in this hobby of ours never fails to astonish me. Sounds like you've got plenty of painting to see you through at least one winter!

Having just had a closer look at the collection it will be several winters!