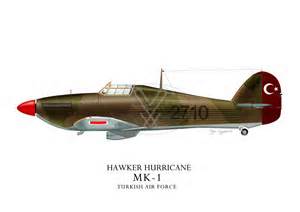 I am really looking forward to repainting these (I have four of them) from their RAF plumage and interestingly enough, the Turks refitted the Mk1 with two 20mm cannon in exchange for four of the .303 machine guns.

I am of course referring to the Hawker Hurricane in the title of this post - with grateful thanks to Mr.Fox for continually reminding me of the fact....;-)

The club night was a welcome change and we took to the skies over Southern England in 1940 once again with a match up of four 109 Es, a pair of Spitfires and a pair of Hurricanes. Yours truly was driving the Spitfires and rather carelessly managed to lose one to the eager attentions of the marauding Germans. I managed to down one of  'yellow-nosed bastards' but  the real stars were the Hurricanes. They fired twice in the entire game and shot down two fighters. My remaining Spitfire managed to nail the third of the four 109s so the final score finished up RAF 3 Luftwaffe 1 - no need for penalties then....;-)

I have mentioned previously about my project list and my long time tradition of buying myself something when I have gotten back into work. Well, the parcel arrived yesterday and very nice it is as well. However, I needed to send off for some rather essential additions to the collection and so it will not be unveiled just yet.

My decision not to proceed with a Pacific set up for the WW2 aerial game has served to enable me to concentrate rather more on what I want to do in regards to the Middle Eastern project. I have come up with a provisional list for each of the four forces based on what models are currently available in the range and are suitable for 1941.

4 x MS 406 and 4 x Hurricane. I originally intended on using P40s but decided on Hurricanes simply because I wanted them 'in theatre' and the RAF would have access to Spitfires. This does raise the spectre of Spitfire versus Hurricane dogfights which should be interesting, to say the least!

4 x Brewster Buffalo and 4 x Spitfire. The Spitfire will be the Mark 1 - I would have preferred to use a Mark 5 but they do not make one yet in the range yet. I rather liked the idea of a Fleet Air Arm contingent of Fulmars and Martlets given that the old fields being protected are primarily for the benefit of the navy. I may do something with this and if I do then it will require two of the former and four of the latter.

If I ever add the French into the mix then four each of the D.520 and the MS.406 would more than suffice.

If you have not tried the Axis and Allies WW2 air game then you really should - it is enormous fun to play and is quick and easy in its execution.

We enjoy it anyway.