I am not ashamed to admit that the inspiration for this action came solely from the excellent article in Miniature Wargames Number 361 by Arthur Harman - Little Wars for little money in little space. The article was described by the author himself as 'Being an adaptation of Mr HG Wells' toy soldier kriegsspiel according to the principles of Messrs Morschauser and Cordery, for the entertainment of impecunious gentlefolk in these recessionary times, by Arthur Harman, resplendent in his stripy blazer and straw boater.'

The following action represents a further spin on the immortal Battle of Hook's Farm in that I am using a hexed grid (my Hexon tiles), Bob Cordery's Memoir of Battle rules and my own particular homage to wargames in days gone by - my wooden block armies.

The combatants for this action comprised the Turks and the Bulgarians rather than Red and Blue and each side consisted of the following forces:

The battlefield was a standard Command and Colours sized 13 x 9 hexed playing area. The buildings are from my collection of ceramic souvenirs.

The Battle of Kanca Ciftlik, May 1913 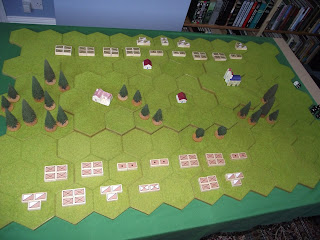 The initial dispositions viewed from the Bulgarian start line. Kanca Ciftlik is to the left of the central clump of pine trees whilst Yangin Kilise is the blue roofed building on the right. The Bulgarians are fairly concentrated with the infantry deployed to either flank and the bulk of the artillery in the centre and most of the cavalry on the left.


The view along the opposing battle lines with the Turks on the left of the picture. The Turks have four of their six infantry regiments facing Kanca Ciftlik and their cavalry deployed in the centre and left flank. 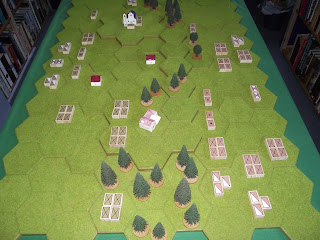 Turn 1 sees the Turkish advancing on either flank and securing Yangin Kilise (the church at the top of the picture) unopposed. Meanwhile the Bulgarians move up their artillery with infantry support for the assault on Kanca Ciftlik. 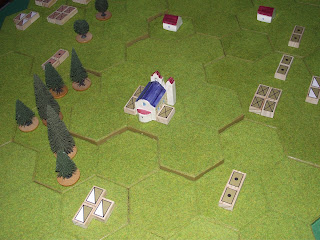 The Turkish advance guard secure Yangin Kilise with the cavalry screening their left flank and the artillery moving up in support. 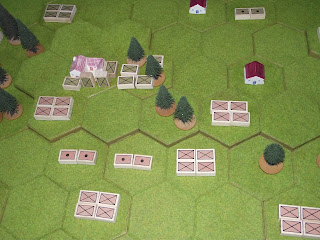 Turn 2 and whilst the Turks are able to move into Kanca Ciftlik the Bulgarians response is swift and deadly as the farm is assaulted by their infantry and heavy casualties are inflicted on the defenders. 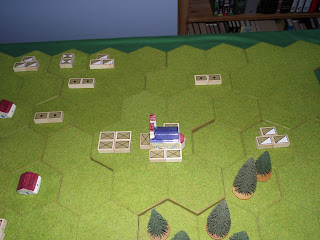 Meanwhile the Turks consolidate their hold on the church with infantry moving up in support. 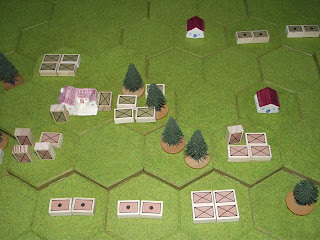 Turn 3 sees the battle for the farm swinging first one way and then the other as the Bulgarian assault inflicts a further casualty on the Turks whilst they suffer heavily in return. The Turkish artillery joins the fray and opens up on the massing Bulgarian infantry in the centre. 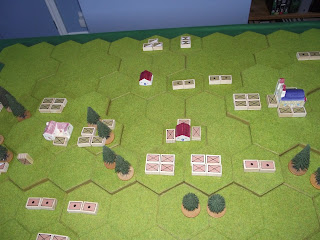 Turn 4 and the massed Bulgarian infantry in the centre secure the central building, thereby threatening both Turkish flanks. The Turks manage to beat off the assault on the farm and on the other flank, send the cavalry around to attack the Bulgarian rear. 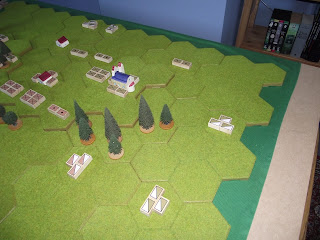 The gallant Turkish horsemen are driven back by the Bulgarians but a further regiment of Ottoman cavalry is on the way. 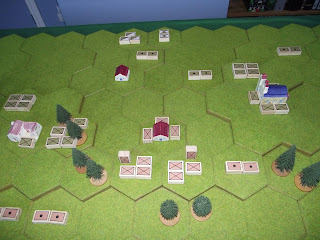 Turn 5 and at last the Bulgarian attack in the centre begins to take shape although casualties are suffered  from Turkish artillery and long range rifle fire. The Turks supporting the church are temporarily pushed back by the Bulgarian artillery. 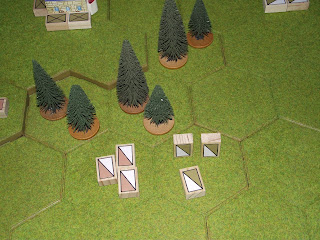 The Turkish cavalry are repulsed by the Bulgarian horsemen. 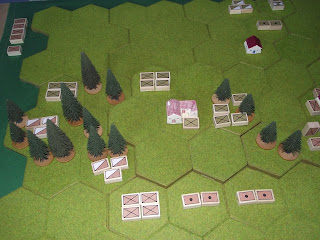 Turn 6 and the remaining Bulgarian cavalry push into the wooded area on the left of Kanca Ciftlik whilst the infantry make ready to assault the farm. 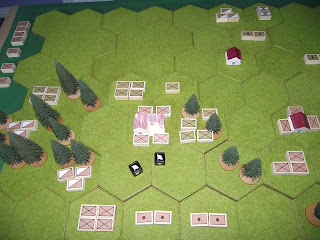 Disaster for the Turks! The Bulgarian infantry assault the farm and the remaining Turkish defenders are forced out (note the two flag results). The Bulgarians rush in to occupy the scattered buildings formerly occupied by the Ottomans. 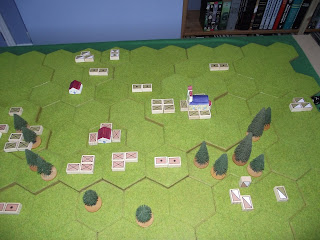 Turn 7 and the Turkish cavalry fight back against the Bulgarian horseman at the bottom of the picture. 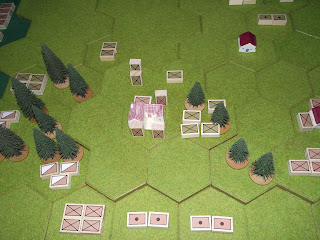 Meanwhile, the battle for farm increases in intensity as the Bulgarians come under heavy rifle fire from no less than three Turkish units. Can the Bulgarians hang on? 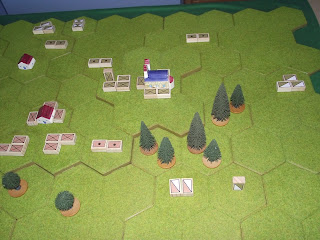 Over on the Bulgarian right flank the last of the Turkish horseman are driven off and the Bulgarian artillery pounds the Ottoman infantry by the church. 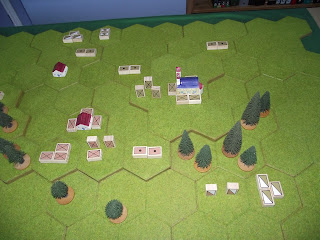 Turn 8 and at last the Turks begin to prevail against the Bulgarian right flank. The second Turkish cavalry unit gallantly charges into the Bulgarian horse and routs them whilst the Ottoman artillery continues to pound the Bulgarian infantry on the crest. The Bulgarian return rifle fire inflicts heavy casualties on the Turks by the church by way of returning the compliment. 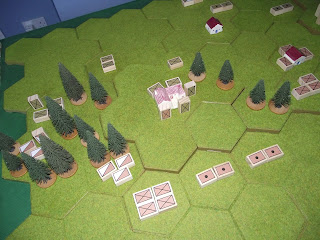 Meanwhile the farm of Kanca Ciftlik changes hands for the final time as the remaining Bulgarian defenders are destroyed and the Turks reoccupy the buildings although not without heavy losses. The Bulgarian cavalry engage with the Turkish infantry at the far side of the wood with each side suffering minor casualties.

At this point both sides has reached their respective exhaustion levels - Turkey 15 and Bulgaria 17 so the Turks were declared the victors in a hard fought and close run action.

I really enjoyed the battle as it is the first game I have played for a while. The rules (Bob Cordery's Memoir of Battle) worked really well although I may incorporate the 'battle back' facility whereby units can fight back against attackers if they are not destroyed as per the normal combat rules (not against artillery though). The solo mechanisms worked well but I will think about banking activations in some way - I will post about this in more detail later, once I have thought about it - so that game turns can potentially have a little more control over them.

It was great fun to fight and many thanks to Arthur Harman for the idea - along with, of course, Messrs, Wells, Morschauser and Cordery....;-)