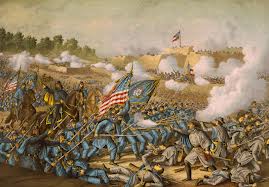 I am a huge fan of this series of ACW pictures - the reality was somewhat different though!

I know I was only in the office for a mere three days but it feels like a whole lot longer! I have had three days of intensive training using new software and reading procedures manuals until my eyes bleed. I actually made contact with a live potential candidate today and have sat in on three interviews so all is moving along nicely. Next week I will be unleashed on an unsuspecting city so watch for the FT Index going haywire and shares of Starbucks going through the roof!

I am absolutely loving it so far.

One thing that did occur to me though is that as yet I have not kept to my time honoured tradition of buying something for myself to celebrate being back in employment. Such a tradition cannot lightly be set aside and so I will be splashing the cash in due course although probably in a direction that may come as something of a surprise. Of course with Broadside just around the corner I may wait until then.

I will say no more on this.

In the meantime though, I have been reading Rally Once Again by the late and great Paddy Griffith. The book is a study of what battle in the American Civil War was all about and it is one of the most thought provoking titles on the war I have ever read. Revisiting this title is to maintain my enthusiasm for all things blue and grey prior to the great paint fest. I will need to get a couple of packs of figures though to finish this off completely but nothing major.

I have also been applying the brain cell (or rather what ever is left of it after some 16 hours of 1980s VHS training goodness - did we really look like that back then? If so, WHY?!) to the ancient galleys or rather reacquainting myself with the Salamis campaign, again, prior to starting the painting.

My final instalment of models from Stonewall is still en route but oddly enough painting these is not worrying me in the slightest. All the models I have in stock are cleaned up and ready to base and paint and as mentioned previously will be tackled on a blitz basis.

Great to here your enjoying your new job! Can you really wait until Broadside???

Glad the job has begun well for you.Do think hard of what you are going to buy yourself,enjoy the anticipation and planning.I look forward to hearing about it.
Finally can I ask after your son?

Cheers old chap! The answer to the second part is probably not BUT I promise I will not spend ALL my money in advance....;-)

Many thanks Sire! The plans are already under way for the 'ooh shiny' acquisition and you are quite right that the planning is all part of the fun!

Funnily enough we had a call from the Police last night - they have now arrested the second suspect and he was being interviewed yesterday. The third culprit has been identified and will be arrested shortly so things are beginning to move at last. My son still has no feeling on the side of his face although the doctors have said it can take an age for this to comeback, assuming it does.

Thank you for asking.