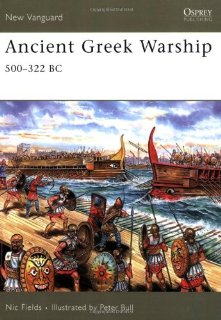 After having spent the last two days on the usual job hunt and the associated phone calls and emails; not to mention the huge undertaking of painting all the garden fence panels - it was with some relief that the Osprey title above dropped through my letterbox.

I have my final list of models to pick up from Navwar for this project so will hope to add these to the paint tray at the weekend. I have also decided to go with the WRG Fleet Action Rules by Richard Nelson rather than the cut down set in his book Salamis. They look and read really nicely so all I now need to do is to:


Onwards and upwards then!
Posted by David Crook at 17:10

How can I sneak this one into the house, my wife is encouraging me to have a "one in and one out policy" ... er, on wargaming books that is

I know virtually nothing about galley warfare . . . but how can you go wrong using a set of naval rules written by a fellow with the last name of "Nelson"?

I have a copy of that Salamis book tucked away somewhere. if only I could find it!

Ospreys don't count - you could always disguise it as a magazine....;-)

Good point well made! It is quite simple in essence - usually you have two schools of thought which are occasionally on opposite side - ships that attempt to board and those that attempt to ram. Better sailors ram.

Very excited about the whole idea though and watch this space for developments - especially the land tie-in.

I cannot vouch for how up to date the information in Richard's book (remember it was written in the early 1970's)is but it is really good wargamers guide in my opinion.

I really like his Fleet Action rules (the WRG set) and I also own Warfleets of Antiquity with some other titles on the period.

PS I am looking at your Fire and Fury based set as well....