Wednesday evening saw yours truly at the club enjoying a rather entertaining Portable Naval Wargame - Pre Dreadnoughts using the collection of the redoubtable Mr Fox, who also supplied the rather splendid newly hexed cloth and his usual sagacious and erudite application of the rules in use. Aside from organising the scenario, supplying the models, preparing the rules with some homegrown amendments and acting as all round good guy Mr Fox also took the time out to take some pictures which I have added for posterity. By his own admission these are not of the highest quality although they looked fine to me and certainly capture the essence of the action. 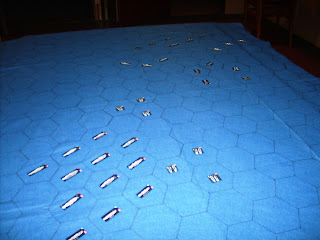 The Austrians, on the left, approach the Italians at the top of the picture who appear to be in some degree of disarray - but is it a cunning plan unfolding? 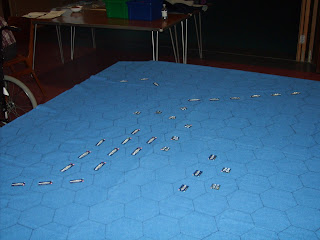 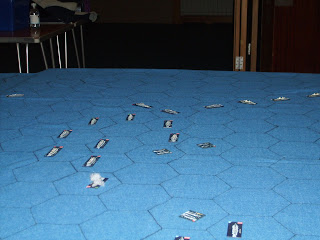 The climax of the action saw the lead Austrian ships engaged by both destroyers and battleships with predictable carnage and mayhem ensuing. It was not entirely one-sided though as the Austrian battleships destroyed one of the Italian armoured cruisers (out of the picture to the left) in a truly punishing salvo. The losses the Austrian suffered were heavy and at this point, being several heavy ships down, they conceded.

Essentially the Austrians compact sailing column, screened by destroyers, was headed off by the Italian  battleline but at the point of contact it could have gone either way. Fortunately for the Italians, a combination of very impressive gunnery and the simple expedient of having ships on ether flank of the attacking Austrians served to carry the day.

Despite the shortage of pictures the game itself was vastly entertaining and once again, Bob Cordery's Portable Naval Wargame, in conjunction with the tweaks of Mr. Fox, provided an action that was speedy in execution, tactically challenging, slick from the mechanics point of view, historically viable and above all, fun.

Many thanks to Mr Fox for just about everything and to Mr. Fosker (who was commanding the Austrians) for being a doughty and implacable opponent.

It was a great night's entertainment and Mr Fox's 1/3000th collection is very nice indeed.