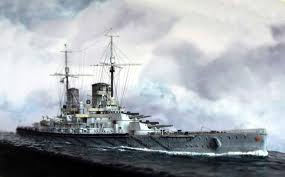 S.M.S. Lutzow - she was suttled at Jutland after receiving some 24 heavy calibre shell hits. In the opinion of many this class of warship (her sister was S.M.S. Derflinger and near sister the later S.M.S. Hindenburg) was amongst the finest ever designed.

I received an email from Mark at Stonewall Miniatures to tell me that the final part of my order is now on its way from the wilds of the West Country. I am delighted with this news and in the meantime have been dusting off the work I had undertaken on bringing the old Avalon Hill Jutland rules into something rather more to my curent thoughts on the subject of WW1 naval warfare. It is funny that the passage of time since I made a start on this particular part of my project has not dimmed my enthusiasm to any great degree but it has reminded me of the problems I experienced the first time around - namely attempting, in effect,to reverse engineer the ship specifications and such like.

My plan is to use the Jutland system pretty much as it was written but with my own take on the gunnery and damage. You may recall that I felt that the original system made for a very short game as ships could be rendered impotent in fairly short order by some fortuitous enemy gunnery. This is probably realistic in terms of the effects of a ship being pummelled continuously (or, to be more accurate, being hit repeatedly in a short space of time) but does not make for an entertaining game, especially of you are the recipient of such an exchange! I read somehwhere recently that at Dogger bank the combined fleets fired around a thousand heavy calibre shells with something like fifteen recorded hits - of which two thirds were scored by the Germans. Clearly then, for a GAME we need to have something a little more decisive but not shatteringly catastrophic (unless you happen to be in command of a British battle cruiser of course!).

The problem with the system as it stands is that capital ships only have main guns and no provision is made for secondary weapons. There is a system available from one of the numerous magazine articles written over the years but this is not really what I was looking for as I wanted to represent carying gun calibres with separate factors. I factored this in but then hit a minor snag in  that it meant that ships in effect gained extra damage boxes so ships with more guns would last longer before having to lose flotation or protection points.

My solution owes a debt to Paul Hague's WW1 era rules featured in his book - Sea Battles in Miniature. In a nutshell, and I have yet to work out the specifics, each hit that is scored against an enemy ship is rolled for. The hit in each case is recorded against the ship dependent on the effect roll. I have yet to determine the table for for this but one could also state that each hit must be assigned on an alternate basis e.g. main, secondary, flotation, main, secondary and so on - in other words hits effect the ship all over rather than just in a single area first. Using the latter as an example then every third hit suffered by a target ship comes off the flotation value. Historically ships under heavy gunfire tended to take most damage above the waterline but the possibility of an underwater hit cannot be ruled out. Using the latter 'one in three goes below' approach will allow for this. As ever, this will need to be tried out and once I have a selection of models ready I fully intend doing so.

Jutland uses formation counters for 'Light Ships' - meaning that light cruisers and destroyers are massed with the former typically representing two or three ships whilst the latter could be anything up to nineteen vessels! Clearly this will not do and so I have settled on a destroyer base representing four such vessels and the cruiser base two. In each case this could be varied depending on the scenario.

So far, so good then.

The biggest stumbling block I came across previously was around the question of protection values. They did not seem to be consistent in that I thought that it was based around the maximum thickness of belt armour. This was fine for (most) of the German ships but without exception the RN vessels seemed underprotected. Now I am not about to start a debate around the relative merits of German as opposed to British shipbuilding and damage control etc - I doubt that I could add little to such a contentious subject - as what I want is a consistent measure of this figure. I have settled on using the maximum thickness of belt armour as the benchmark so the ships of the Royal Navy will be better off than under the original game - usually by a couple points. It may not be the most scientific method available but it works for me and the games I want to fight. The important thing is that the approach will be uniform and that I will know the whys and wherefores of what the numbers actually represent!

It is always a good idea to step away from a particularly thorny problem and to revisit it with a fresh pair of eyes at a later date. Certainly in this case it was a good idea as the issues I was previously grappling with now seem a little less daunting.

Once the models arrive from Stonewall I shall be busy with the painting so getting the rules ready in advance is a sensible course of action.

I am hugely excited by this!
Posted by David Crook at 16:52

Sounds like you've hit a good compromise. The Paul Hague book is an excellent place to start and has a lot of good ideas in it. I used his rules as the starting point for my own home brews (along with GQII).

I also like the idea of using groups of 3-4 DDs, TBs etc.

Many years ago I used Paul Hague's rules as written - and enormous fun they were as well. These days I want something a little more streamlined hence using some of his ideas with those contained within Jutland. I reckon the end result will work for me although the purist may be somewhat vexed!

The use of multiple bases for the smaller ships will serve to keep the numbers down and to avoid the inevitable milling about that seems to bedevil tabletops when using a lot of models.

We will hae to see what comes out in the wash.

If I might make a suggestion, David, it would be to use a die roll to determine what a "hit" damages rather than a set order of damage.

That way some ships will have differing problems . . . some with more guns but about to sink; others with less protection, etc.

Using the dice to assign hits would be my preferred option - the 'third hit goes below' would be for games involving a lot of ships and where speed was of the essence.

You are quite right about the damage and varying effects thoug and hopefully the dice system will replicate this.

There is an interesting account of the sinking of SMS Lutzow in "Sunk! - How the great ships were lost" by David Woodward (1982). Only a short chapter but interesting anyway. Any protection values tend toward the notion that British Battlecruisers in particular were under protected. There is more research to suggest that the losses were primarily due to poor ammunition stowage, the large number of cartridges scattered about the wrecks lead towards the belief that "rate of fire" had become more important that accuracy. If needed, I could take a look through the library and see what I could suggest? Hope the games are fun!

For sure the rate of fire issue, with charges being left all over the place and doors open, was a recipe for disaster - in effect a bomb waiting to go off! The British battle cruisers (especially the early types) were underprotected when facing battleship calibre weapons as they were little more than large armoured cruisers.

I need to draft up the rules but everything is in place for me to do so - all I need is to get the models ready.

IIRC Campbell's analysis of Jutland suggested the "underprotection" of Brithsh BCs and BBs was somewhat irrelevant since none of the theoretically inferior armour was hit at ranges that made a difference. Also worth remembering that German shells were as plagued by problems as British ones (British shells tended to detonate as they penetrated armour, German shells tended NOT to detonate as they had inferior fuses), poor ammunition handling characteristics were indeed the achilles heel of SOME of the BCs, but not all, and that the "superior" German subdivision was somewhat let down by the complex fluid handling systems that penetrated the bulkheads low in the ship and which were (a) leaky and (b) highly susceptible to shock which made them very leaky.

Many thanks for the response - I knew that anything damage control/protection related would pique your curiosity and so I am pleased to have you aboard sir!

The whole subject of protection is to me a huge can of worms and one of the major complexities of naval warfare in the period that can be as simple or as detailed as you desire. For my own purposes I want a simple system that would be fast in execution and would have the appropriate amount of 'feel'. Using the armour thickness as a benchmark is a simplification because it usually did not cover the entire ship in question so a shell could just as easily hit the 2" thick part of a belt as the 12" - presumably with correspondingly (but again not always) greater damage.

I have assumed that a 12" hitting a ship with 6" armour will, all things being equal (which of course they NEVER are), be more likely to cause more damage than one protected with 12". In game terms the latter ship will last longer than the former due to the better protection levels - again, all things being equal. It is a crude method but appears to work.

In my opinion, the British Battle cruisers were not so much bad ships as ships being used in a fashion that arguably they were not fitted for.

The 'superior' German protection, as you rightly point out, is something of a myth as the detailed survey carried out on the Baden revealed - and for the reasons you mention.

At the end of day the system I am going with is simple and is designed with speed in mind - essentially the great and continual wargames compromise - especially as the firing ships will be hitting the target far more often than they would do in combat.

I will be allowing for the effect of dud shells in the hit table which will go some way towards extending the table top lives of the models I will be using!

Many, many thanks for input Dave, as ever it is very much appreciated.