U.S.S. Enterprise and a Curious Parcel 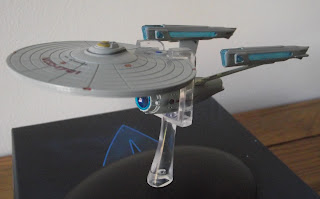 The second issue of the Star Trek model part work appeared in my local supermarket today and taking advantage of SWMBO's staff discount I promptly purchased it! This is the movie Enterprise and although slightly larger than the original TV version (by around 14m according to the magazine) it is roughly half the size of the Enterprise D. Here we have the usual 'scale the model to fit the packaging' arrangement as strictly speaking this should a lot smaller but in fact is the same size as the model in issue 1.

I really do not care - the detail of this model is quite simply superb! I am not struck on the basing method employed but am loathe to start drilling holes in the metal hull. The next issue sees the Klingon Bird of Prey which is also on the list of models to acquire but I am really waiting for issue 11 - U.S.S. Reliant.

The curious parcel of the title of this post arrived this morning courtesy of that very nice chap, Tim Gow.
He very kindly sent me a number of figures to go with the planned Plastic Army Men set up. I am undecided as to what I am going to do with them but am sure they will come in very useful so many thanks to Tim for them. I like the fire brigade/highway construction types and the police officer with a pump action shotgun is a great looking figure - military police perhaps? 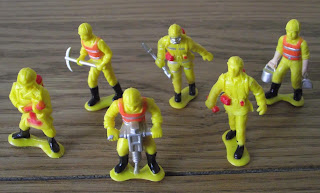 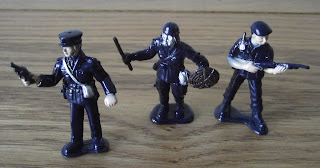 The officer with the peaked cap reminded me of the English French police officer in 'Ello, ello' for some reason....'Gid moaning every biddy....'

The figures appear to be made from a rubber type material rather than the more usual plastic but that is nothing that several layers of PVA and varnish can't cure! Many thanks once again to Tim for the figures - they are much appreciated.

I'll not hear a word against officer Crabtree !

That man is everything I aspire to be!

The ship does look rather good. Perhaps the base it designed to offer more support to it?

I think it is a magnificent idea to aspire to be such a paragon of bilingual expertise.

They are a nice selection of figures and will look very useful once I have worked out what to use them for.