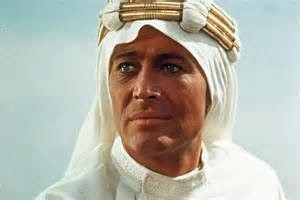 "The dreamers of the day are dangerous men...."

By now I expect that most readers of this blog are aware of the fact that the actor Peter O'Toole passed away after a long illness on the Saturday just gone. He was a very fine actor appearing in both films and theatre (I really enjoyed Jeffrey Bernard is Unwell) and of course, came to world renown with his portrayal of Lawrence of Arabia in the 1962 David Lean film of the same name.

The film is one of my all-time favourites and from when I first saw it on video (sadly I have never seen it on the big screen although I was lucky enough to see my other film of the era - Zulu - at a cinema in the early 1970s) was enthralled by the whole Lawrence story. At the present time I have the film itself on Blu-Ray, the extended version of Maurice Jarre's superb soundtrack album, numerous Lawrence related books, have avidly read the Seven Pillars of Wisdom and planned numerous tabletop adventures set during the Arab Revolt.

The film was truly epic in scale and Peter O'Toole's performance was certainly worthy of an Oscar - he hold the record for the most nominations without actually winning one although did receive an honorary lifetime type one. Historically the film was all over the place and being described as 'based upon' is probably the most generous way to describe it - any film using Seven Pillars of Wisdom as a reference is always going to be on slightly wobbly ground - but, like Zulu, doe not in anyway detract from what was a towering cinematic achievement.

As Lawrence it is fair to say that he captures visually much of the complexity of the man and his many facets. It was a thought-provoking depiction although in reality he was around a foot too tall - Lawrence was quite short.

In closing I would say that the film Lawrence of Arabia, and the late, great Peter O'Toole's depiction of the man himself have been the main instigators of my lifelong interest in the Arab Revolt and have contributed, by extension to interests in many related areas.

Indeed a great actor , sadly there are too few of his like around today

I could not agree more. He is famous for many roles on the big screen, but Lawrence will always be the one I associate with him best.

I was out having dinner with about 12 old boys last night and one of them said that he had worked on the film Laurence of Arabia both here in the UK and on location in Morocco as an electrician. He did say that Peter O'Toole even then had a reputation as a serious drinker. On many occasions they had to send out a search party for him as he wasn't in his hotel room but had been out all night on the lash. He said a real character.

We will struggle to see actors of his personality again for sure. They don't make 'em like that anymore!

Despite the artistic licence Lawrence of Arabia remains one of my all time favourite films and Peter O'Toole's portrayal of the man a riveting performance.

Excellent post, David. A wonderful actor, who brought quality to everything he did. I always enjoy watching My Favourite Year - "I'm not an actor, I'm a movie star!".

I was also strongly influenced by the film "Lawrence of Arabia" as a child of the sixties. Later, O'Toole provided one of my favorite moments at a Baptist college when we screened "The Ruling Class" on a Friday night. I was one of the few bold enough to laugh out loud. My heresy did not go unnoticed.

As you Know I am planning an Arab Revolt game for Broadside 2014. It will not be 100% historically accurate, but there will be room at the table if you want to sit and play for a while. You'd be more than welcome.

Now that is an offer I would be very foolish to refuse! I would certainly like to have a stab at some point during the day. What rules will you be using and do you have anything in mind scenario wise? Drop me a line 'off piste' if this is still hush hush on roguejedi@btinternet.com.

All the best and many thanks!