Pirates and the Royal Navy 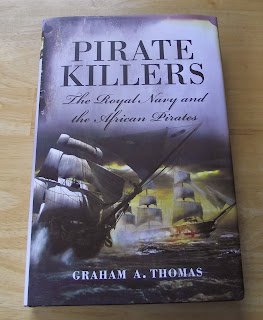 Something for the Christmas holiday or even during the commute to work!

The Royal Navy have been involved in the suppression of piracy for centuries - which should come as no surprise given the importance of overseas trade to the United Kingdom.

I came across the above title in our local indoor market and after a quick glance through the contents quickly decided that it would be well placed on my bookshelf! In a nutshell the book covers the operations of the Royal Navy against various of the African pirates from the time of Oliver Cromwell up until Queen Victoria and with a nod to the current situation re Somalian piratical activities. The pirates, including the infamous Barbary Corsairs preyed on shipping from all nations and usually any captives were sold into slavery or held for ransom. The situation was hampered by the fact that many of the Barbary potentates were nominally subjects of the Sublime Porte so care needed to be taken lest the wrath of the Ottoman Empire was roused.

There is much potential within this title for small scale war games - either naval actions or combined arms and for me the chance to use the Barbary Corsairs in some fashion would be a temptation difficult to resist. The campaign against Algiers in 1816 by Lord Exmouth being but a single example of what the theatre has to offer.

I must confess that I prefer the idea of the Barbary Corsairs rather than the more conventional Pirates of the Caribbean simply because of the whole Turkish/Moorish angle - this is really an extension of that part of the Ottoman Empire that was more or less continually at undeclared war with the Western powers for some three centuries. The French conquest of Algeria in 1830 led to a substantial reduction in piratical activities along the North African coast although it still continued to be a concern.

I have a large selection of ships that could be used for actions set during the sailing navy period and the later actions featuring the campaign against the Riff during the 1850s would make a cracking mini-campaign involving landing parties and such like.

I will research this in more detail and add the idea to the project list - the Barbary troops could be used for anything from 1650 to 1850 and I am thinking that in 15mm it would be easy enough to cobble together.

David some Patrick O'Brian will further put you in the mood for gaming small naval combats...
Merry Christmas to you and yours from all at the Duchy of Tradgardland!

What was old is new again :-)
I just sent quite a few months doing this myself with several Royal Navy warships!

Not naval (and a bit later) but your post reminded me of "The Wind and the Lion" . . . which is a cracking good film of the "Rif" period.

I did wonder if you were up to this on your recent mission. It is a vital job and no mistake.

I have never seen that film but it has been on my 'to do' list for some time.