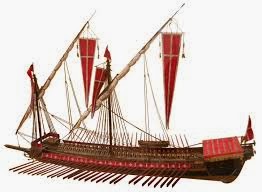 First of all a very happy new year to one and all! Following on from my previous post I had a few spare moments today to sit and think about what I wanted to do this year. If you recall I had pointed out that any projects needed to be small, self-supporting and resourced from my existing collections. My gaming needs for the year will have to be modest in respect of any expenditure as although I am working my disposable income is a pale shadow of what it used to be - this is not a bad thing though, not by any means. Making a virtue of necessity means that I have to really concentrate on what I want to do and how any funds can be applied. This is a challenge I enjoy and it makes the haunting of charity shops and boot sales even more essential!

So, despite the austerity measures currently in place what do I have currently on the plate to consider for the coming year that will need any expenditure (and I am not including materials such as paints and glue etc)?

Ancient Galleys - My current plan needs another dozen or so 1/1200th Triremes which will give me sufficient models to replicate the fleets at Salamis as per Richard Nelson. These will be Navwar models and as they come in packs of two the cost is very modest.

Renaissance Galleys - At this stage this, along with the ACW collection described later, will probably be one of my biggest model purchases of the year as My current plan envisages around fifty models. These will be from Navwar.

ACW Riverine - After the enormous fun I had building the models I have decided that revisiting the same in 1/1200th using Navwar models would be a good idea. I have a number of ideas around using these models operating along the Danube between Fezia and Rusland....;-)

1/100th WW2 Aircraft - I actually do not need many more models for this and the painting backlog I have with those models I already own is more than sufficient to keep me occupied! I will need to source some decals though.

42mm Plastic WW2 - This is a tricky one as I have the infantry I need (although some support weapons would be nice) but I am a little undecided as to how I want to progress this. I need to give this some careful thought.

Space ships and Robots - Something a little different but one that I will enjoy. I have all the material I need at present but expect that some additional bits and pieces may feature in due course.

In respect of what I have that I do not intend spending anything further on then the 1/2400th WW1 ships models take centre stage. I had hoped to add some other models to complete the collection but am now not going to bother so the navies of both Fezia and Rusland will have to make do. Trust me, this is rather a lot as well! The plastic pirate ships will also be featuring at some point although I am unsure about what I shall be using them for at this stage.

I have some ideas to play around with (and using the block armies) for a number of mini campaigns - some of which have been mentioned in recent posts - and I want to spend some time formalising the process for handling these. My current thinking is to have a scenario requiring from three to five linked games over an area equal to nine standard playing areas (in each case a 13 x 9 hex table). This idea is still in the planning stage but I will post once it has developed further.

One thing I must do though is to make sure that my blog reading and comments are rather more speedy than they have been - the same applies to emails. I recently changed my mobile phone and hooking this to my email accounts has caused me a number of teething issues. This has now been resolved but I have managed to delete vast chunks of old emails so if you have contacted me over the last month and have not seen any replies you may have been caught up in the technological maelstrom for which I apologise. It is all OK now though.

Once again then, a happy new year to one and all!

Looks like a good list of projects. I'll be interested in seeing what rolls off the production line, especially with the renaissance stuff. What rules are you considering?

Cheers and best wishes for 2014
PD

A happy new year to you sir! For the Renaissance galleys I am thinking of using Barbarossa - a simple, old school hex-based set.

That is the plan at the moment but who knows?

Best for 2014 and success to your plans. I look forward to seeing the galleys.
Cheers,
MP

I will be tackling the ancient galleys first followed by the 16th century versions. Sadly at this point in time I am unsure as to when but I will certainly be posting when I do!

All the best and a happy new year,

No promises, but I may have some ancient ones in a parts box somewhere. I'll see what I can come up with.

That would be much appreciated old chap!

A smashing 'wish list of projects and no mistake! Building some fleets of Ancient Galleys has long been an aspiration of mine too so I will watch that one with great interest!

I hope 2014 brings health and happiness to you and your family David. And a chance for us to enjoy a beer together too!

Happy new year to you and yours as well Paul - and we shall raise a cold one when you get over here!

The ancient galleys I am planning on starting around March when the 300 film hits the screen - if that is not inspiration enough then I don't know what is!

I have a couple of jobs to complete beforehand but the timing looks do-able!