Somewhere else in the Balkans - Again!....Game Number 46

First things first. I would like to offer my thanks to that very fine chap and all round good guy Kaptain Kobold for the inspiration to fight this action - despite the fact that it is on hexes and with larger armies than perhaps he envisaged the rules being used for!

This is the first game I have fought this year and to be honest, I was really undecided what to do. I have some ideas for some 1914 based games but nothing tangible planned just - and this will form another post in due course - when I came across the good Kaptain's recent post. I know absolutely nothing about the Mexican adventure but what intrigued me was the 'quick and dirty' rule set he 'Kobold' together based on Battle Cry. I was so intrigued in fact, I copied them and decided on the spot to fight an action using them.

Somewhere else in the Balkans - Again!....

This was a very simple set up - both sides equally balanced with 7 x 4 strength point infantry units, 2 x 3 strength point cavalry units, 2 x 2 strength points artillery units and 1 x 1 strength point commander (12 units in all and using a 13 x 9 hexed playing area rather than the Kaptain's 8 x 8 squared grid). This meant a total of 39 strength points with an exhaustion level of 19. Inspired by the good Kaptain's idea around initial deployments (he did not mention how he got to the starting positions but I will) I rolled 12 x D6 per side with scores of 1 and 2 starting on the four left hand hexes, 3 and 4 in the central four hexes and 5 or 6 in the four right hand hexes. 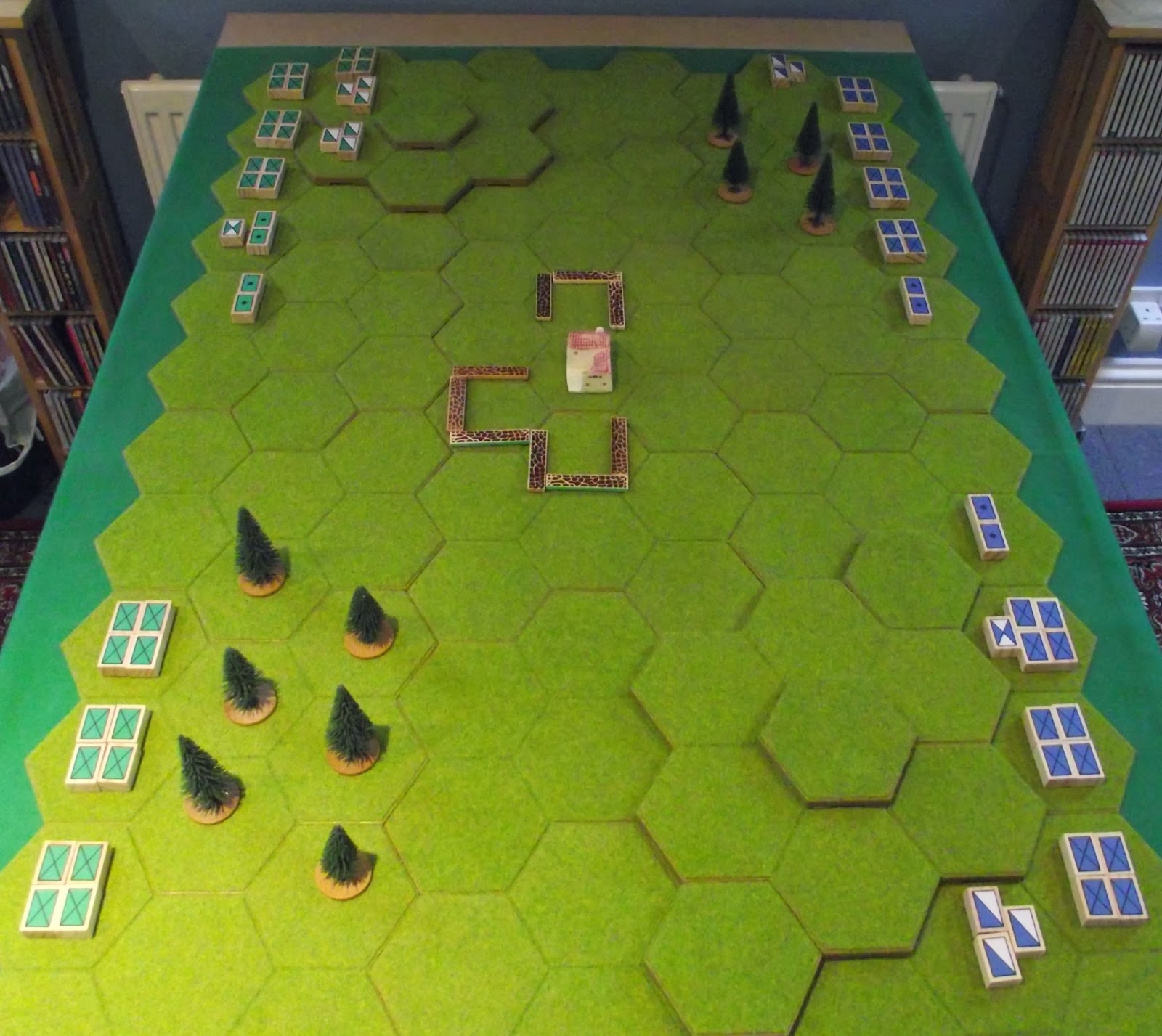 The initial dispositions with the Russians on the left and the Turks on the right. Note that neither side had any great strength in the centre - the dice gods rolling an impressive amount of 1s, 2s, 5s and 6s. 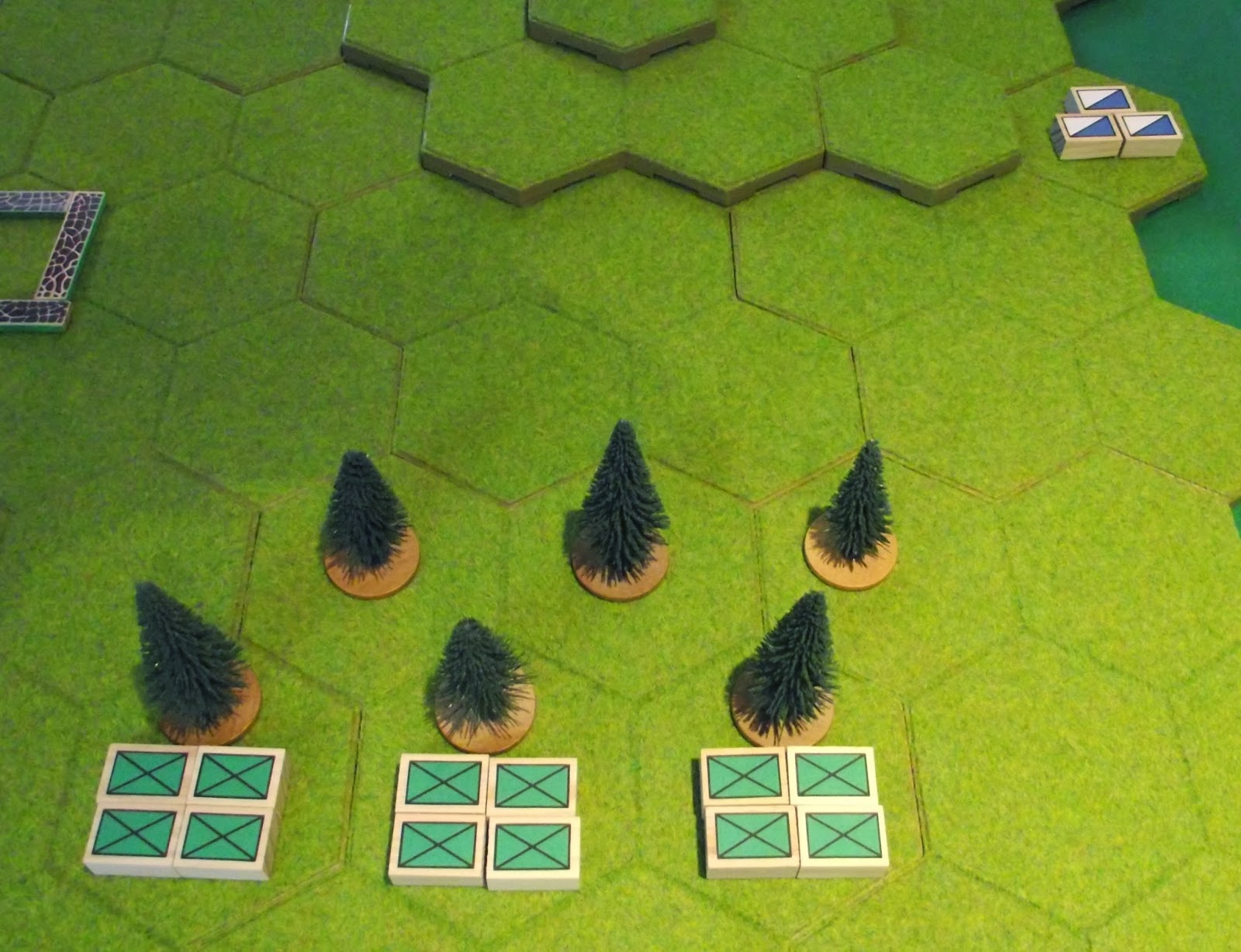 The Russian right - safely deployed behind the small wood. 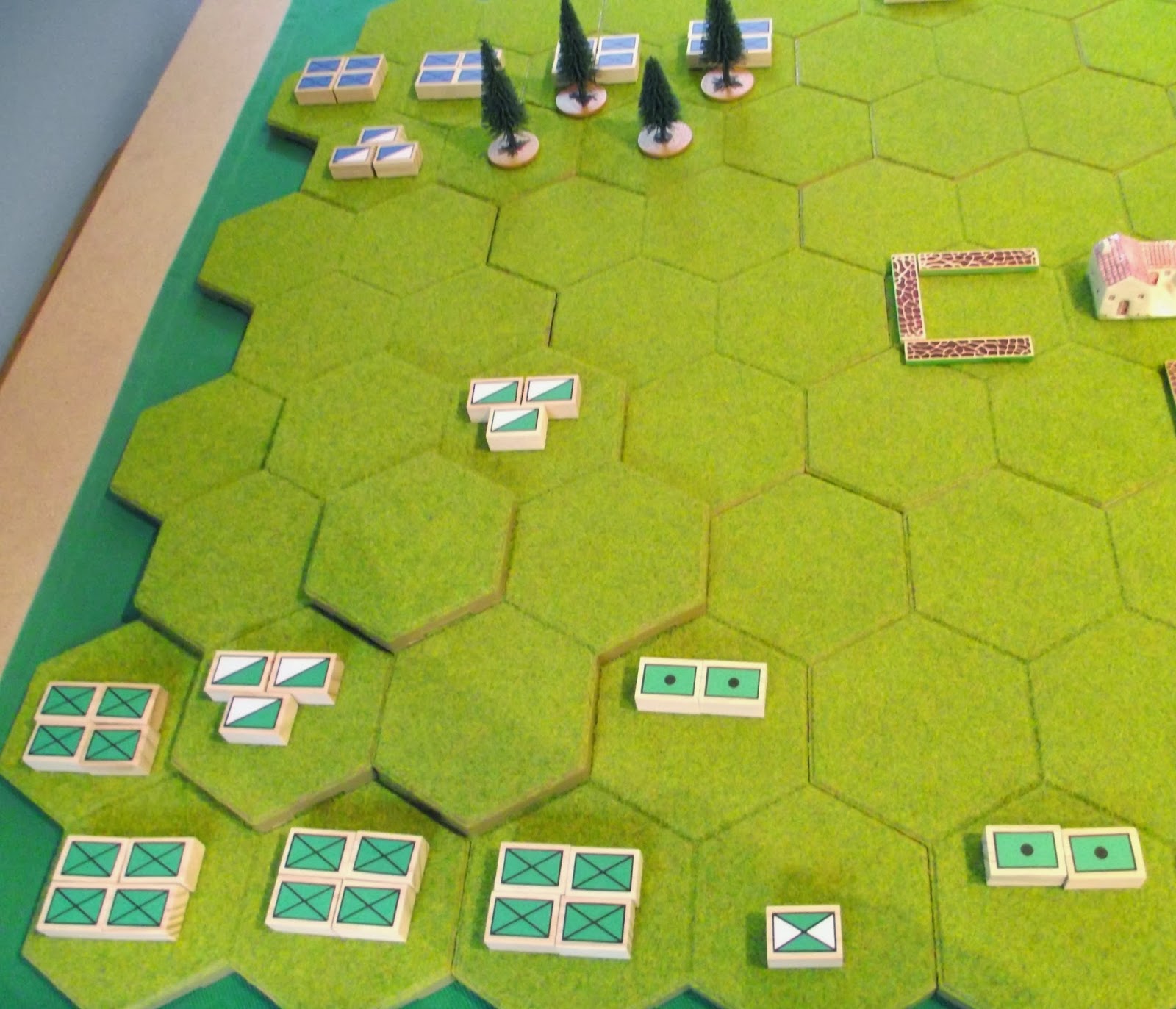 Turn 1. The Turks have moved up on their right and the Russians respond by sending a cavalry unit to scout the suspected enemy position. 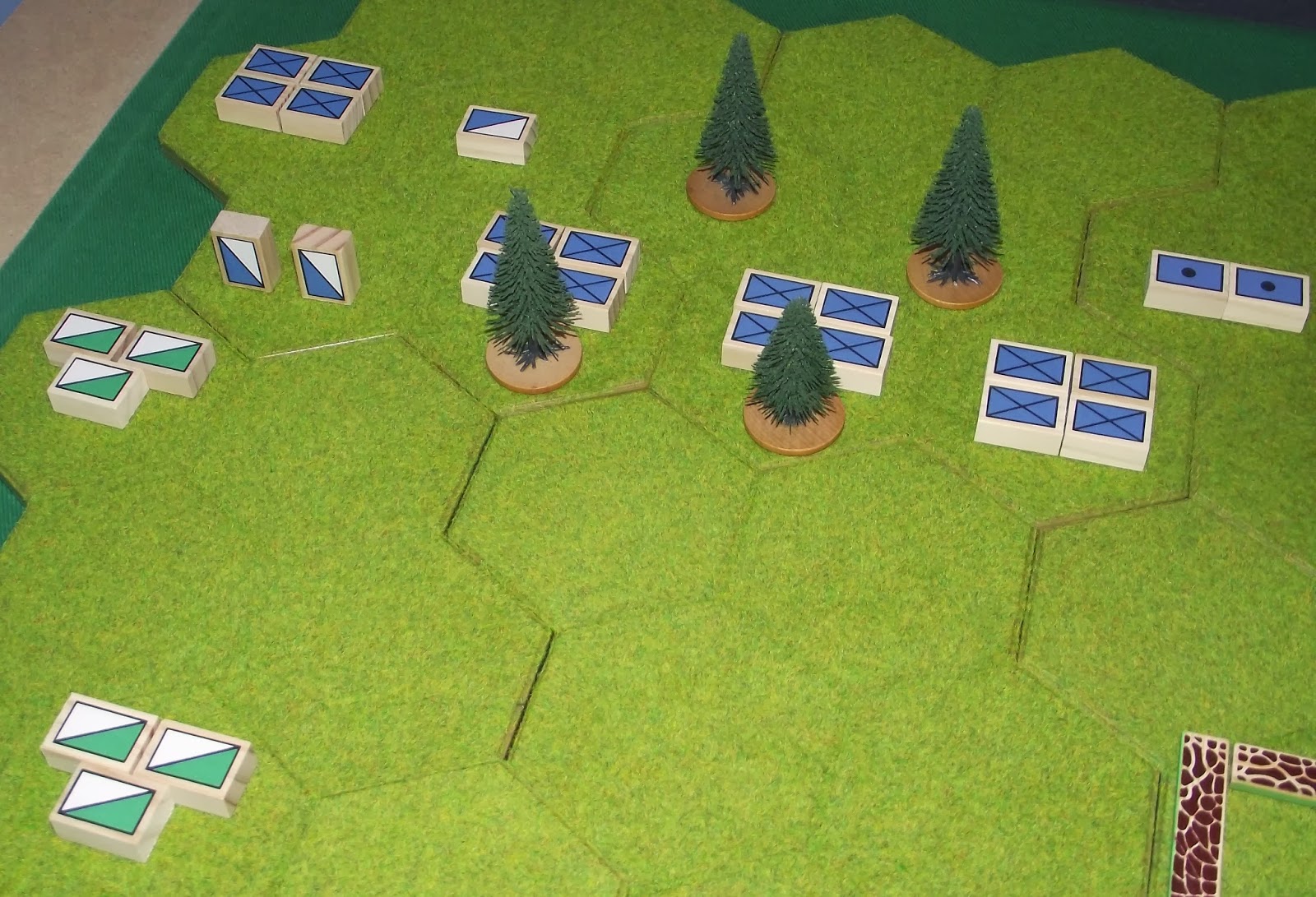 Turn 2. Whilst the Turks traverse the woods the Russian cavalry charges the enemy horse and and drives them off. 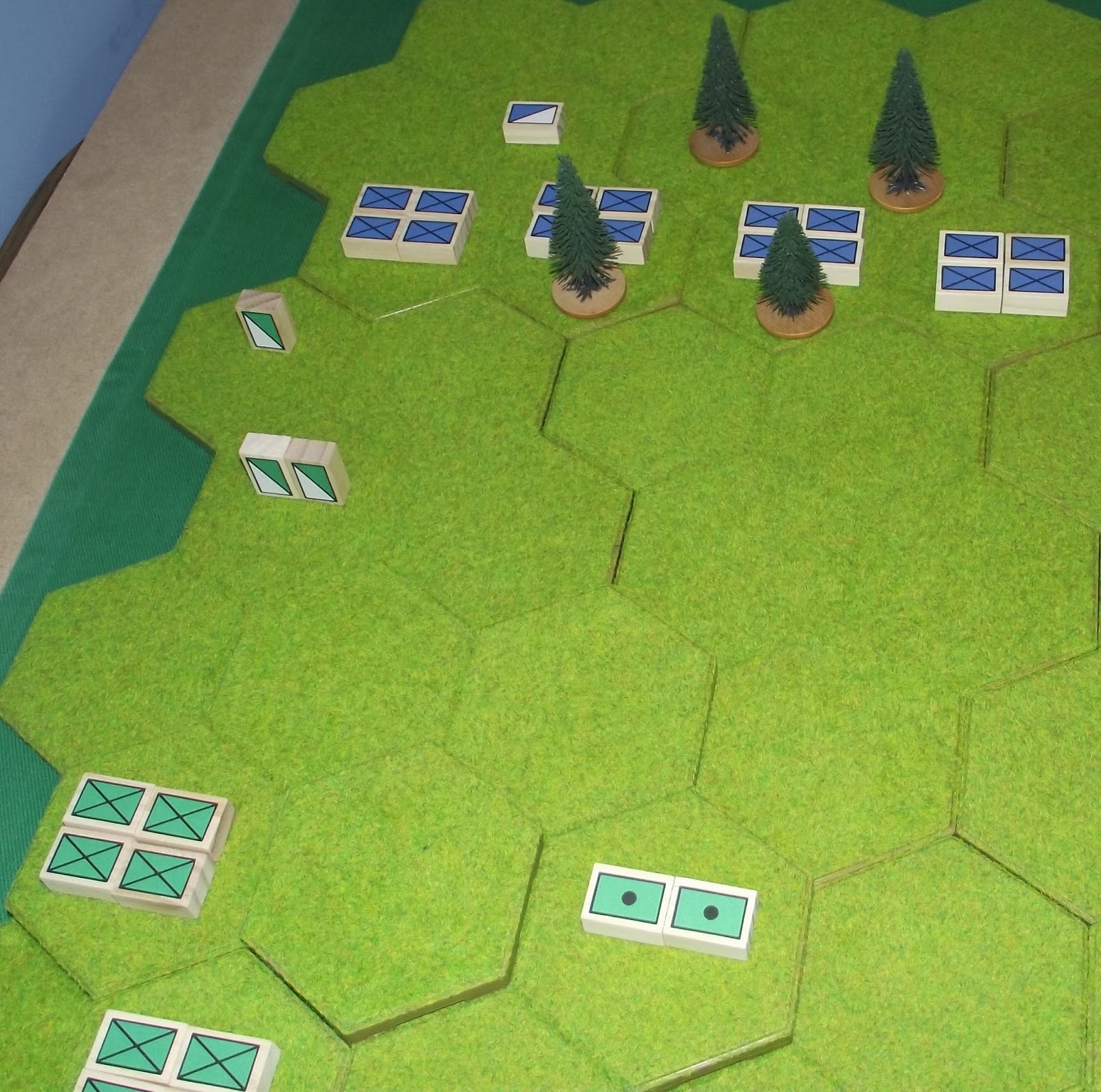 Turn 3. Retribution is swift as the Turkish infantry left fly at the Russian horsemen, emptying many a saddle and destroying them as a fighting force. In the face of this setback the other cavalry unit retires to the rear of the rear of the hill behind the deploying artillery. At last the Russian guns arrive and deploy at the top of the hill, overlooking both the farm and the advancing Turkish infantry. 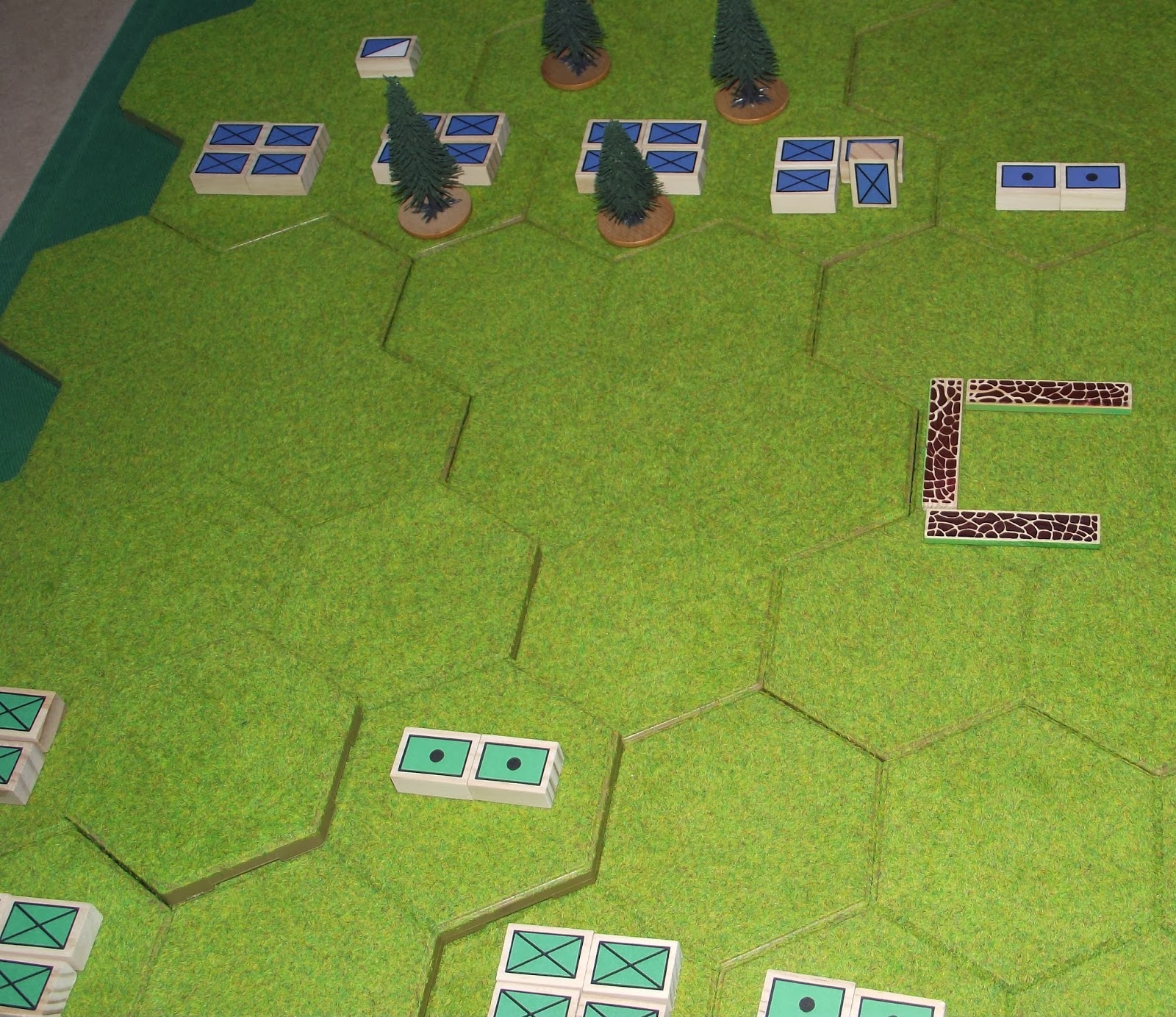 Turn 4. The Russian artillery opens fire and immediately causes casualties on the sole Turkish infantry unit in range. The Turks appear to be in no hurry to close the range whilst the the rest of the Russians move up. 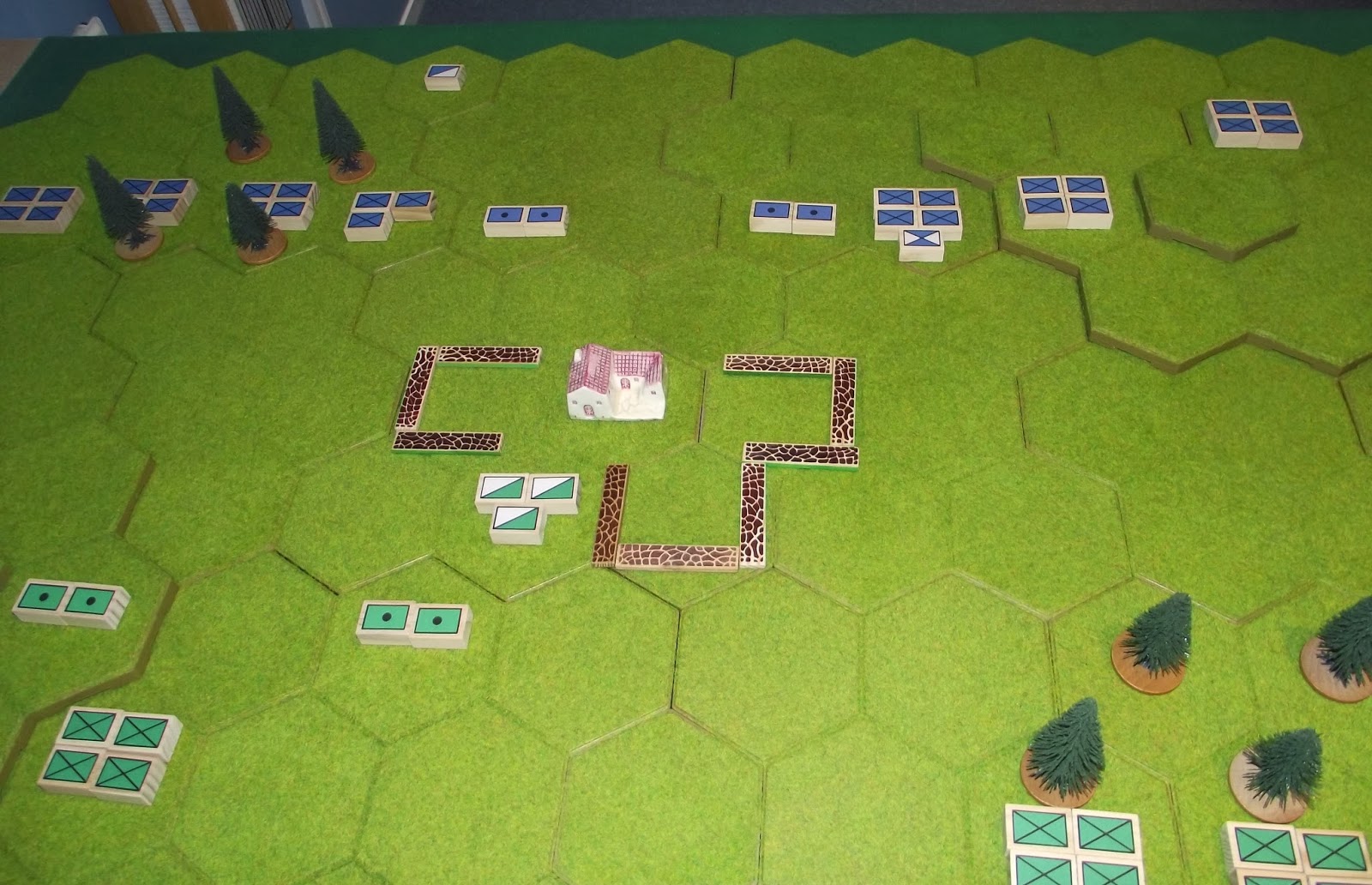 Turn 5. In a bold move the Russians send a scratch force of cavalry and artillery to occupy the farm whilst their infantry struggle to move up in support. The Turkish approach is both cautious and methodical. 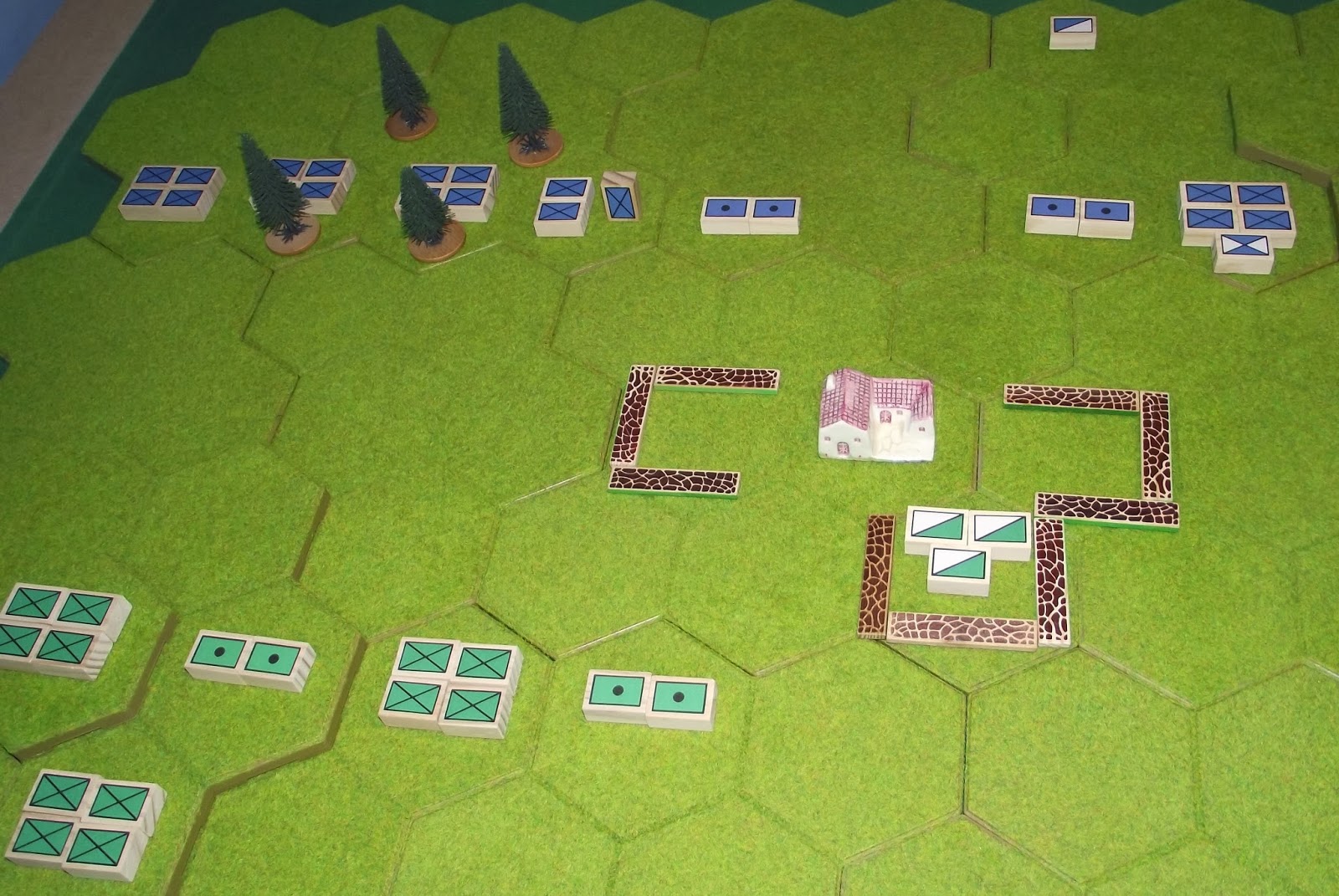 Turn 6. The Russian cavalry enter the rear of the farm with a unit of artillery and infantry moving up in support. Meanwhile their artillery on the hill continue to engage the exposed Turkish infantry. 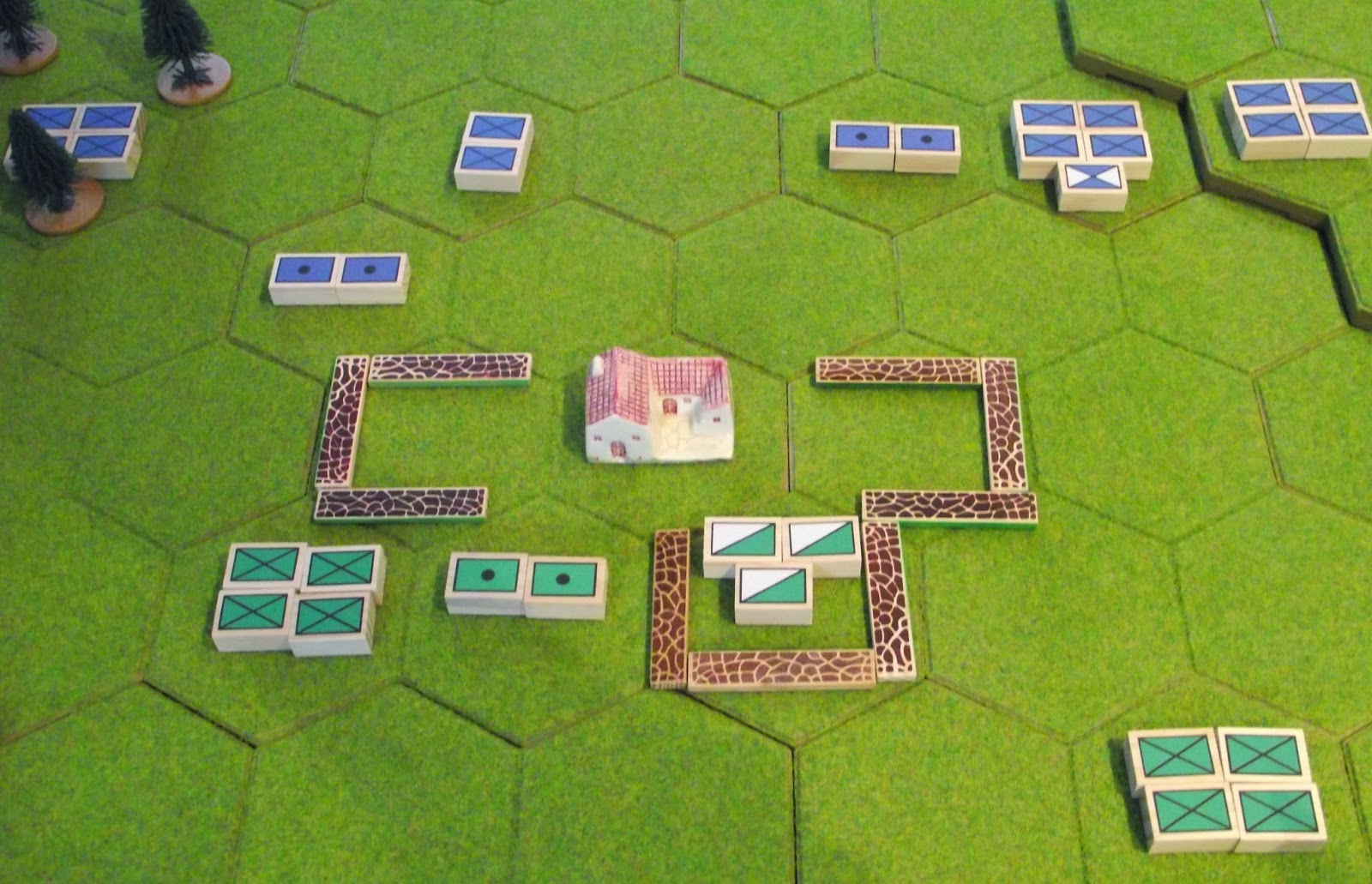 Turn 7. The Russians look to consolidate their position in the farm whilst the Turks move into position to mount a somewhat disjointed counterattack. 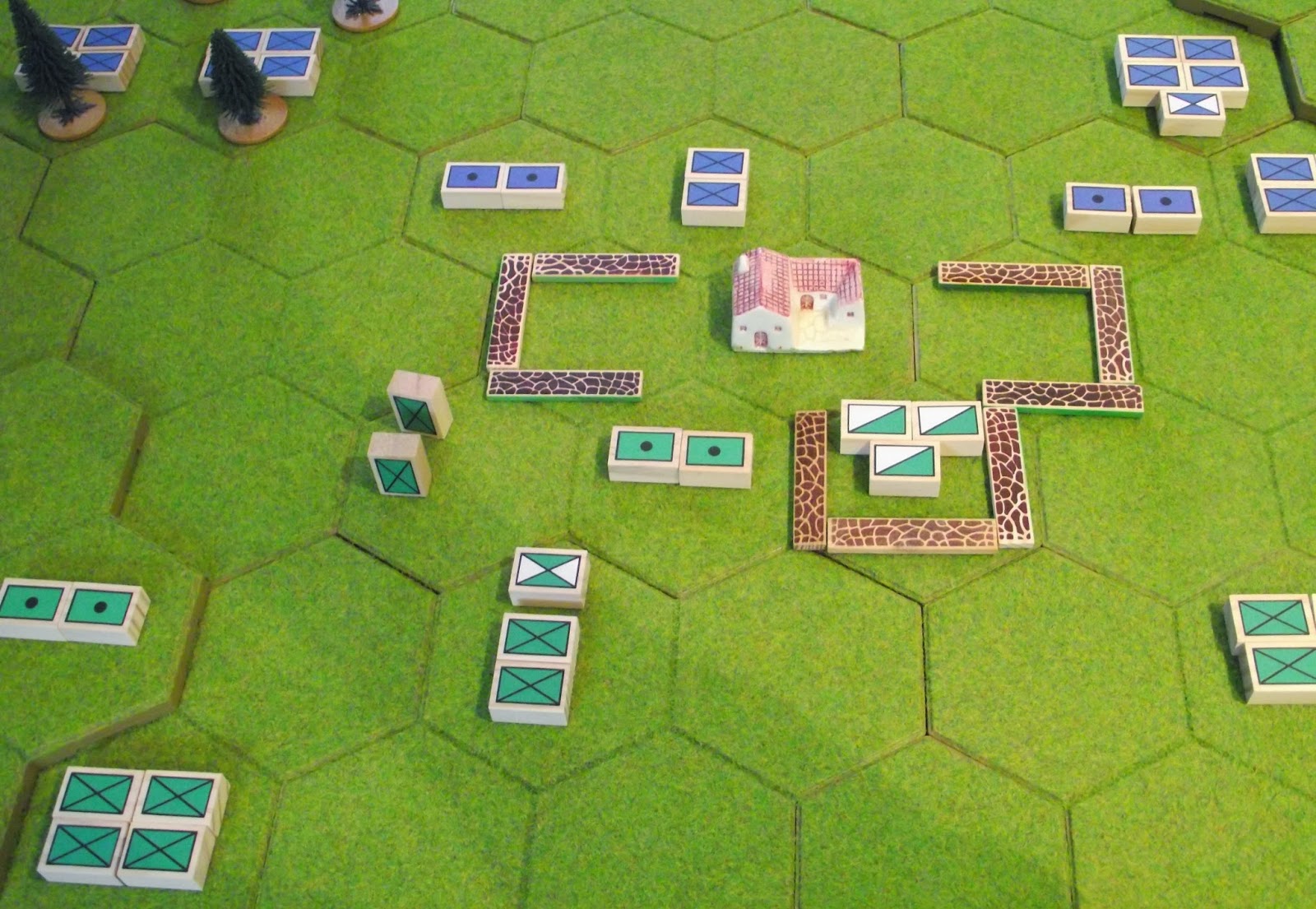 Turn 8. Battle is joined around the farm as a furious cannonade from the Turkish artillery drives off the left hand Russian infantry. The battered Turkish infantry have fallen back from their exposed position beneath the hilltop Russian artillery. Eager to stabilise his centre, the Russian commander joins the retiring infantry and gallantly rallies them to the colours 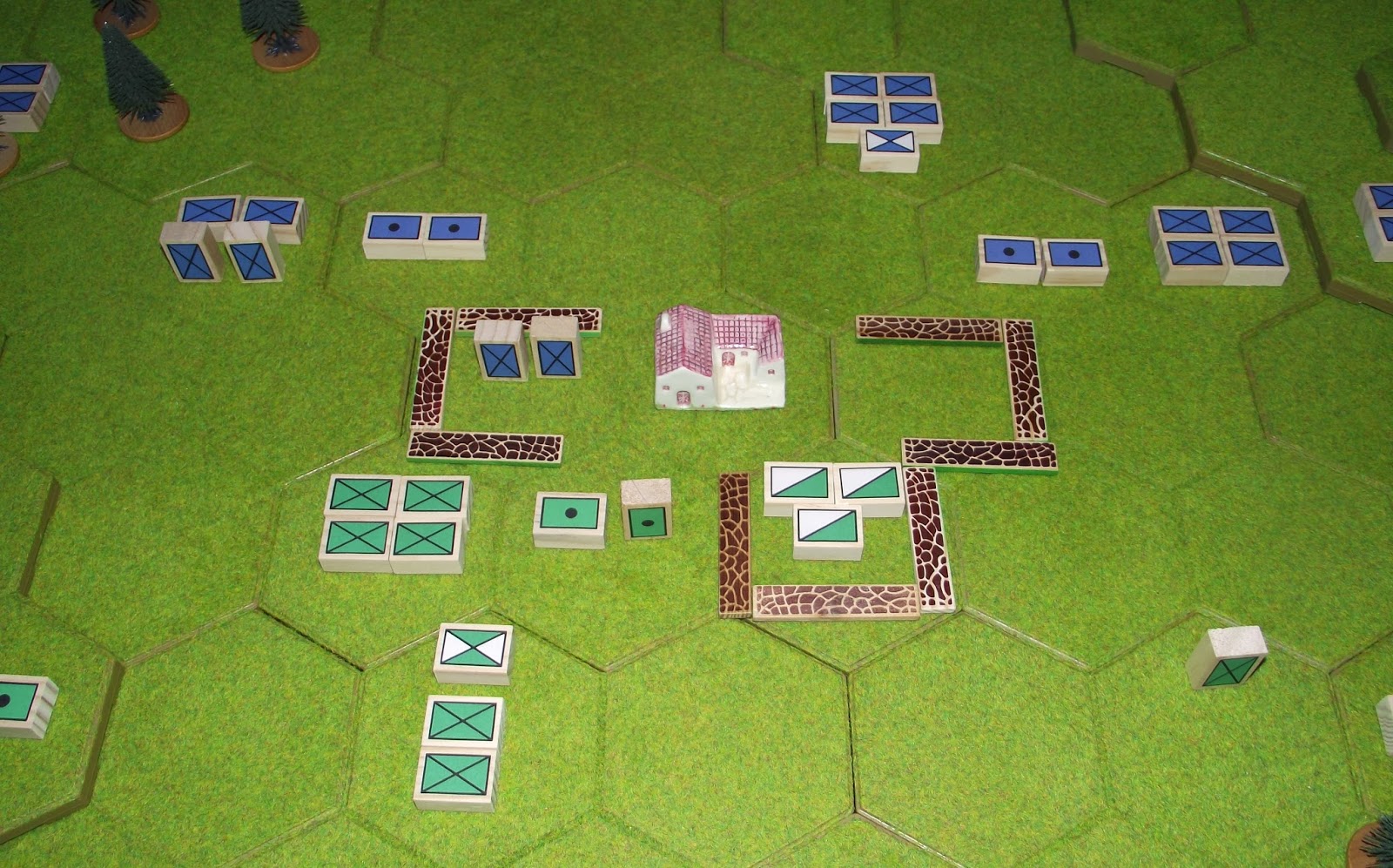 Turn 9. Meanwhile the Turkish infantry flood into the farm - straight into the maw of the Russian artillery. A furious hand to hand struggle ensues with the Turks managing to destroy half of the enemy guns. Their success is short lived though as a fresh Russian infantry unit arrives in support and with a crashing volley destroys the remnants of the Turkish infantry. The farm is, for the moment, still in Russian hands. 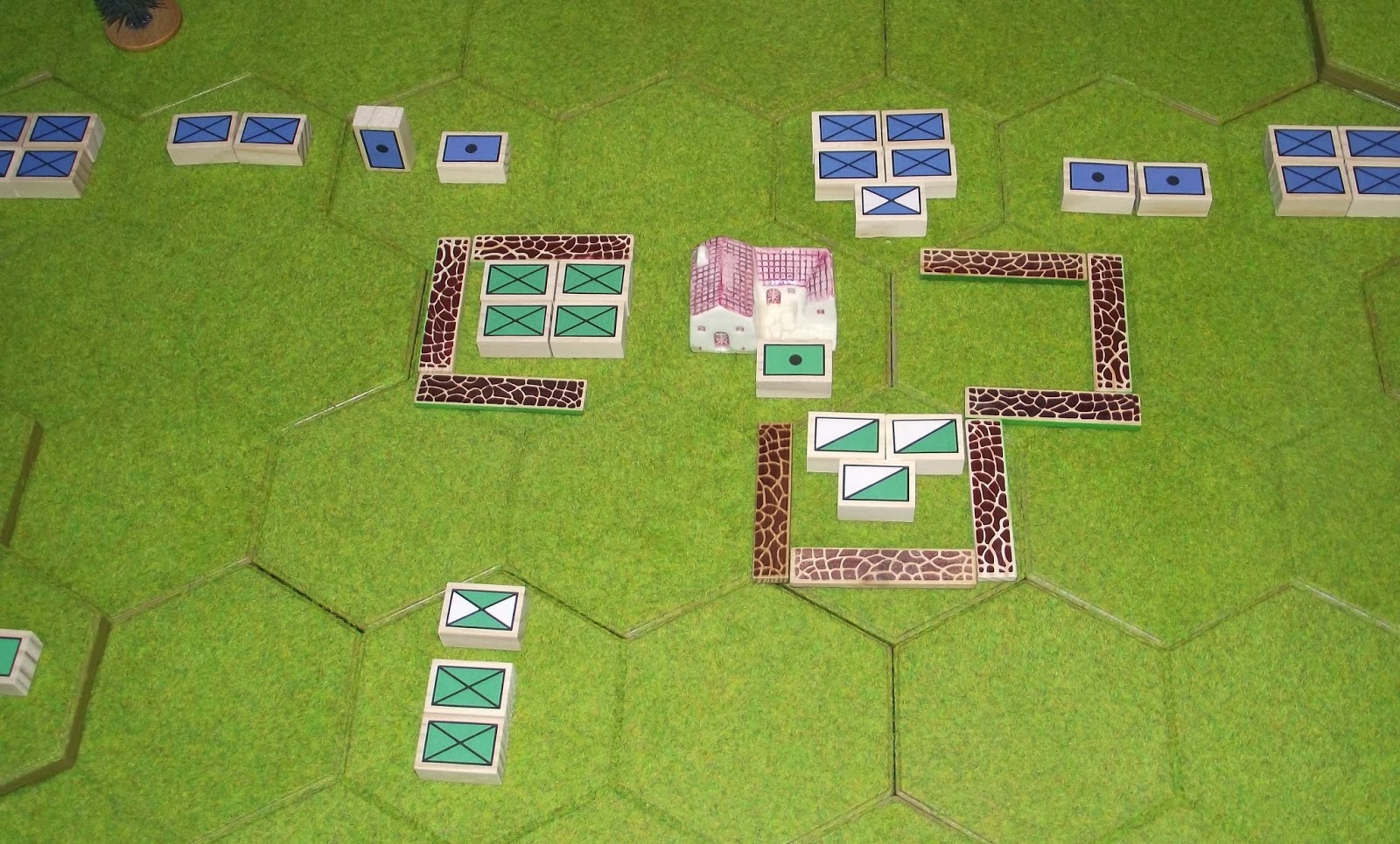 Turn 10. The Russian infantry pour into the farm and immediately engage the Turkish artillery from behind cover, silencing half the battery. Meanwhile though, the Turkish attack is preparing to go in. 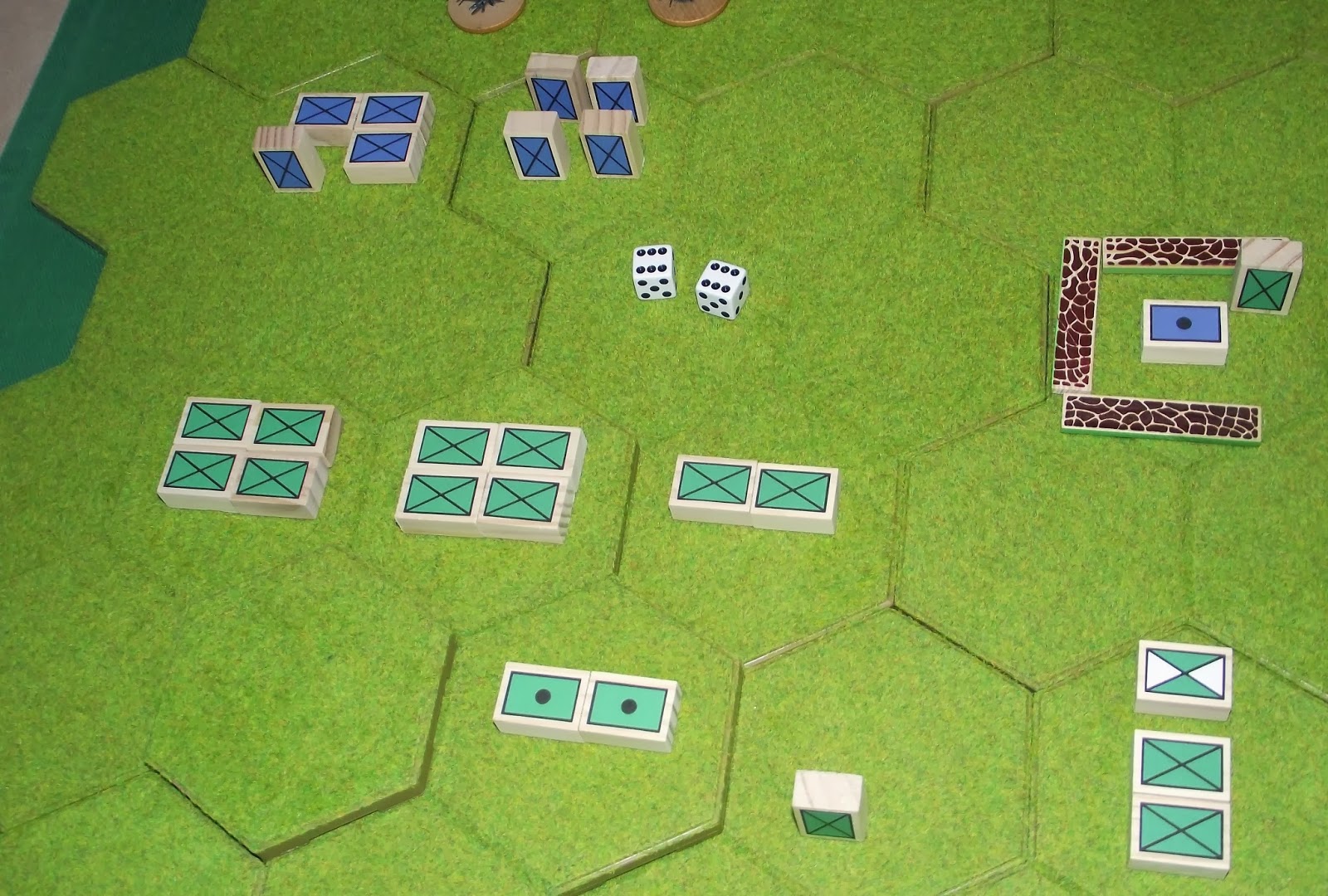 Turn 11. On the Russian left a series of crashing volleys decimated the advancing Turkish infantry meaning that their attempts to support the farm were doomed to ignominious failure. 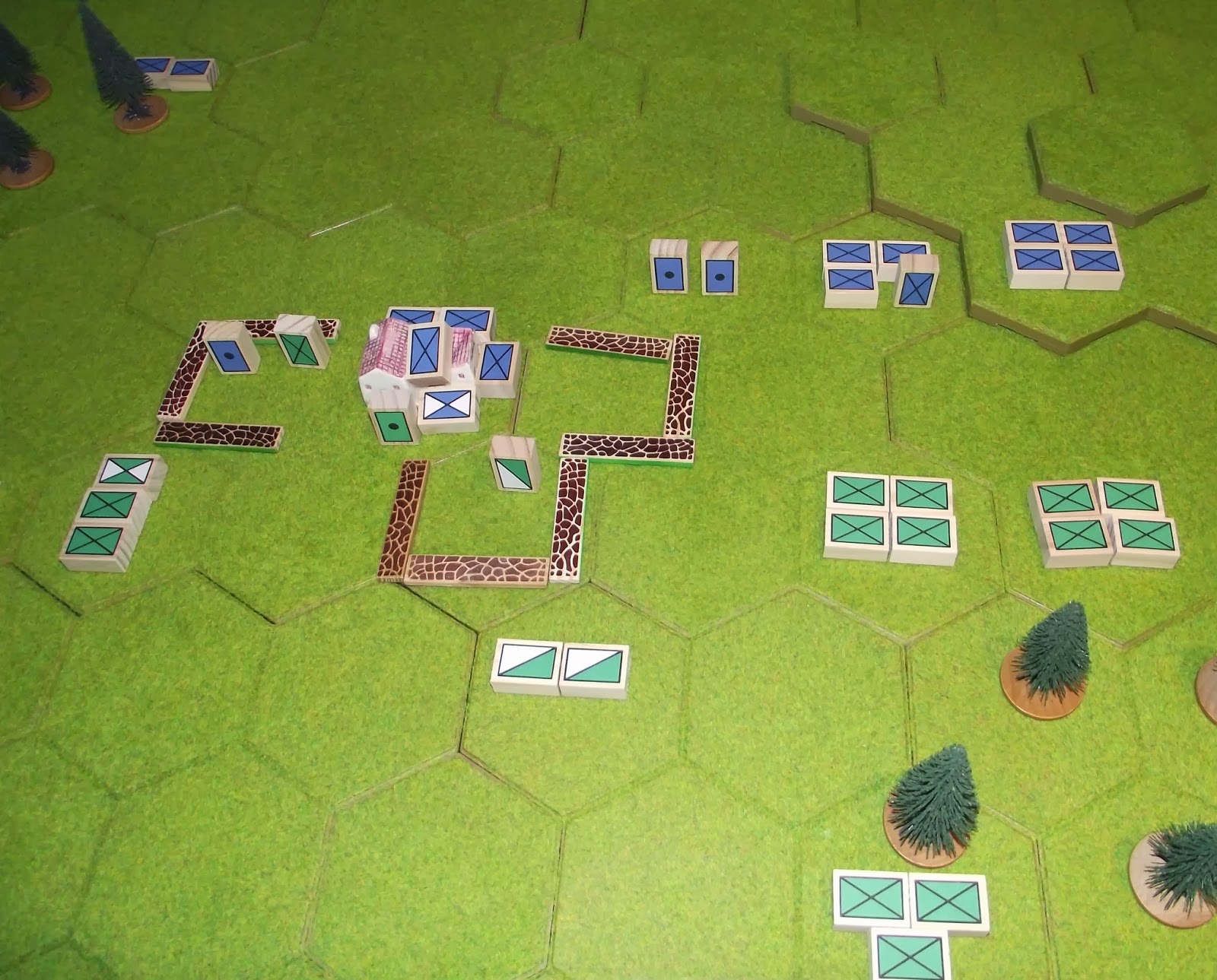 Turn 12. The fighting in the farm was brief but vicious. The Turkish infantry with their commander roared in to the farm and drove off or destroyed the cavalry unit, the infantry and the remaining artillery, enabling the Turkish guns to move in. The farm was now under Turkish control! 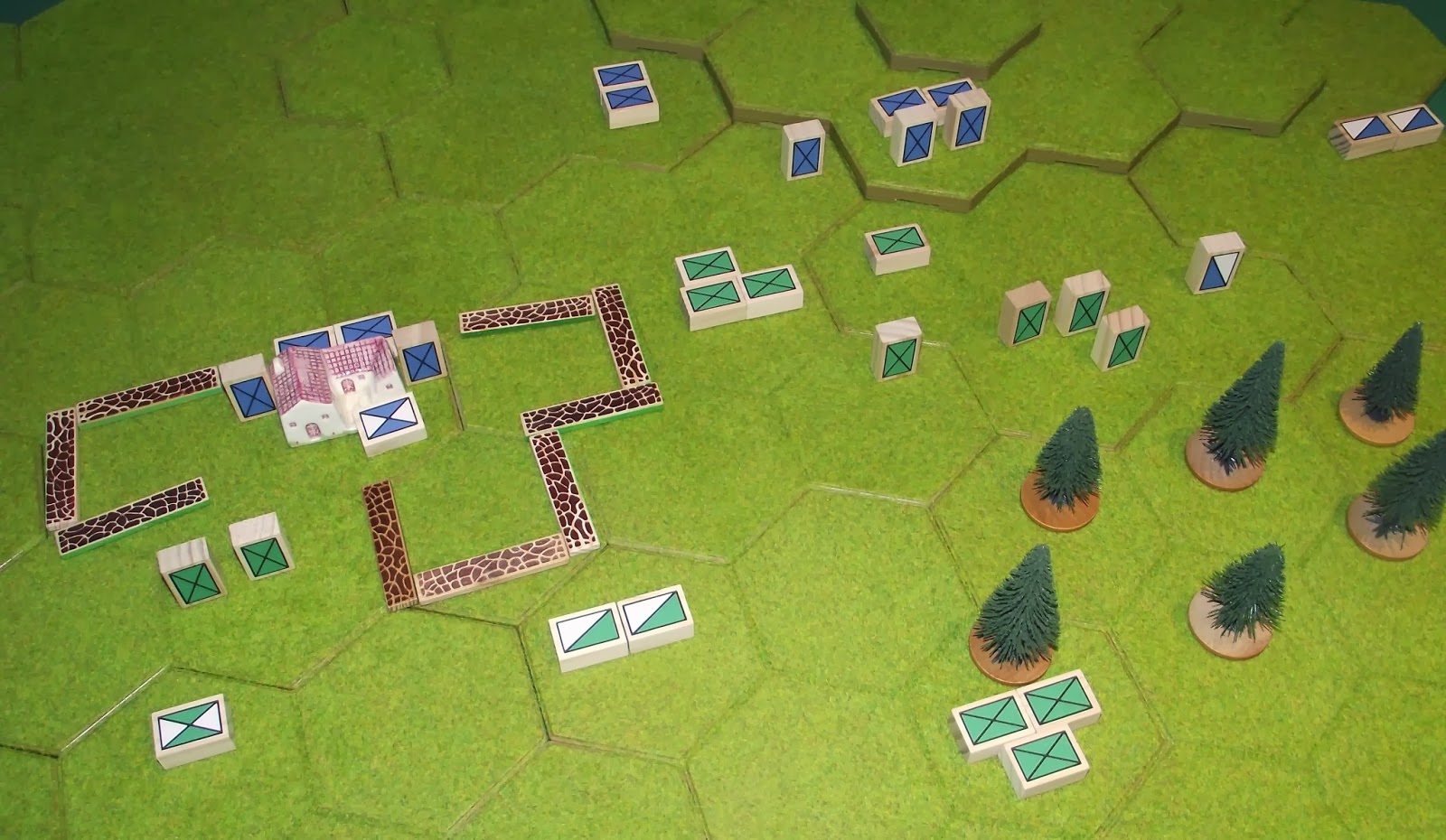 Turn 13. Endgame. The Russian right attempted to drive the Turks to their front away in order to support the renewed assault on the farm now in the hands of the Turks. As they left the cover of the wood the Turkish cavalry crashed into their extreme right flank and despite being driving the horsemen off with losses they still sustained some damage. A ferocious firefight then broke out with heavy losses on both sides just as the final attempt to take the farm from the Turks was made. Despite gallant efforts the ensuing melee inflicted losses on both sides but the Russians could ill afford them and so the commander fell back. However, the Turks had reached their exhaustion level (26 strength points lost) whilst the Russians were still in fighting trim (only 17 out of 19 permitted). The Russians had carried the day!

Well I have to say that my first game of the year was a rather enjoyable affair and I was rather pleased with the way the rules worked out. I needed to add a few things in but the core system was elegantly simple - no surprise given its inspiration. The only change I would make would be to allow infantry to move 2 and not battle as the movement was rather sedate. For the record I added in the 'battle back' facility for units in adjacent hexes that are still standing after combat, the previously mentioned deployment system and rules for terrain and cover.

My feeling is that perhaps the game I played was slightly on the ambitious side for the rules as these were designed for use on an 8 by 8 square grid. It felt quite slow and deliberate for the infantry which would perhaps be better for the 18th century rather than the next. This is by no means a criticism though - they played as sweet as you like.

In closing the game was just the kick start I needed after a few weeks of lethargy so grateful thanks for the good Kaptain for 'making it so!'

Thanks for the nod, and good to see a large game being played with the rules. I nicked them from someone else, of course, and I suspect Bob Corderey was somewhere in the path of 'inspiration' as well - he usually is :)

It was great fun and as you rightly point out, Bob was probably in there somewhere! For the deployment I started on the baseline meaning that more than four units went into the next row. Initially I thought of allowing cavalry to deploy in the second row to represent their scouting function.

I found the infantry move a little on the conservative side but can see why you opted for it after all, on an 8 square grid a move of 2 means you could cross the entire playing area in four moves!

I enjoyed it enormously and so once again, many thanks for the inspiration!