Musing over the Napoleonic Wars....Part 2 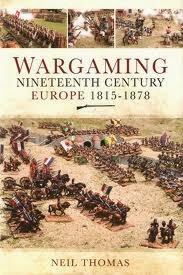 It has been a rather busy weekend for a number of reasons but I managed to find some time to sit down and spend a while pondering further my Napoleonic adventures and the rules I want to use. This coincided with me changing the size of my hexed playing from its customary 13 by 9 to an 8 by 9.

Why on earth would I do that?

Why indeed - but the reason is a very simple one. I want to experiment with smaller scale actions and with rules that are slightly more detailed. When I say smaller scale I am thinking around the 6 to 8 units a side level or roughly three quarters of my usual efforts. I blame that rather cunning Mr. Neil Thomas for this as his book, Wargaming 19th Century Europe, has gotten me very much in a creative lather and looking at lower level actions. I have yet to acquire a copy of his Napoleonic title (although I have the rules) but it struck me that using the 19th century set for the wars of Napoleon would be no bad thing (at least not for what I have in mind) and so I have spent some time today converting these into a hexed format. Ideally I would like to try these out over the course of the next weekend if time permits.

Assuming all is well I may look to adding in some of the 'pure' Napoleonic set mechanisms - particularly hordes and tribal cavalry.

This type of book can do real serious damage to the mind and to the wallet. They should come with a Warning stamped on the front!

I have all three of Neil Thomas' period books and I can't wait to get some use of them on the tabletop.

My mind has already been damaged beyond repair and don't get me started on the state of my wallet!

The other two volumes are certainly on my 'to get' list at some point - oh lawks, there is another project!

I will email you later re the other business - I have been insanely busy over the last few weeks so apologies for not getting back sooner.

I have a couple of ideas about the hexed variant of these rules that I will pass on once I have tinkered with them - I will also be looking at the Colonial implications as well and guess what? I am REALLY excited about the potential of this!

David,
I do agree that Thomas's Nineteenth century book is an inspiring volume - in many ways the best of his books, unless one's interest happens to be Ancients/Medievals - but I fear you may find his Napoleonic volume disappointing. Why? Because much of it is potted history, without any maps, and there is only one set of rules. I think his original Introduction to Wargaming, with rules for a variety of periods, is far better value. There are some alterations to the Napoleonic rules in the later book on that period, but they do not seem very significant.
Regards,
Arthur

Many thanks for the heads up re the Napoleonic title - I was going to take a look before buying in any event - that is most appreciated. The funny thing is that the 19th century set will suffice for what I want to do anyway with only a couple of minor additions. I am going to take a look at all of his titles when I have the opportunity - probably at the Tonbridge show later this month.

The 19th cent book is great and I too will put in a good word for the ancient one though I have never used the rules in it yet.

Get behind me Satan! The Franco-Prussian war is one of my great "wish to do" periods!

That is one I am certainly going to be investigating at the first opportunity!

It is certainly spectacular looking for sure although I rather fancy the Russo Turkish war myself....;-)

It's an excellent book...I like the fact he has clearly thought about the nature of warfare in this period, both in terms of the weapons and tactics but also the politics.

It's made a good alternative rule set for my FPW armies.

The whole production has everything one might need to game the period in a single volume - it is my favourite wargames read of the moment!

You intrigued me with this book and now I am utterly distracted onto the Franco-Prussian War, thinking in 6mm.

This is not what was planned! I so hate you now! In the best kind of way :-)