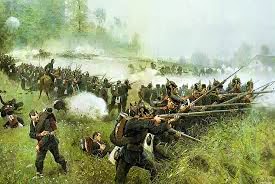 Needle guns to the fore - Prussians in action in 1866

Work on the grand tactical 19th century rules has continued but it has taken rather a swerve in one respect. As I am naturally using a hexed grid (with my trusty Hexon terrain being the playing surface of choice) it occurred to me that at the level I want to fight combat is, in effect, almost on an area effect basis - essentially the contents of hex A versus the contents of hex B. This means that with a hex containing a potential mix of unit types - infantry, cavalry and artillery - should ideally have the combat subdivided to allow for any such differences.

So no more lumping the combat dice together then....

The system I am working on uses a mixture of  individual combat dice for infantry and cavalry and progressive dice rolls for artillery. This works well and is in fact what is used in Command and Colours Napoleonics so its pedigree is a known quantity. I thought about what a hex versus hex combat represented and whilst it readily includes elements of local low level tactics, essentially the process could be pared down quite readily into a minimal number of dice rolls.

It would be easy to just lump the total number of combat dice together and roll away but I wanted to add a little tactical flavour to the process. My thinking thus far covers the following:

Taking the above as a set of bare bones I will factor in - matrix-style - what happens to whom and when so that a round of combat between two hexes full of varied troop types will have the ebb and flow of a tactical engagement - almost on a 'rock, paper, scissors' basis.

Does this slow the game down? Possibly, although I want to make this very simple in execution.
Will it add to the all important flavour? I really hope so as one of the problems with games set at a high command level is that the low level action becomes even more abstract.

It should hopefully serve to address the perennial wargamer's dilemma of wanting to be an army commander that still controls every battalion/regiment/battery in the army!
Posted by David Crook at 18:57

I like the idea of a hierarchy of combat ... and I think that you have got the order of precedence right.

All the best,
bob

I certainly think it is worth a go - the trick will be to preserve the overall simplicity!

This sounds very much like a process a computer would do. Perhaps you should consider some sort of computer moderated gaming?

What about of you used different coloured dice for the different effects and threw them simulatanoeusly.

If you have a hierarchy of effects that could work nicely (eg green skirmisher dice remove enemy skirmishers if present, then infantry).

And I still hate you for making my read that most excellent Neil Thomas book - I have been thinking almost exactly the same thing, except using a gridded system!

David,
I like your hierarchy of combat too, and will apply it to my own rules.

Did you receive the various emails I sent in reply to yours?

Any solution to that dilemma - if dilemma it be - I am interested in seeing! I am inferring from this posting that you are seeing each hex-to-hex encounter as being (pretty much) a battle in its own right. If so we might be looking at a game more akin to operations than battles. I have been thinking about that kind of thing off and on for quite a while now...

Reminds me a little of the Viktory rules (http://www.viktorygame.com/owners.htm) where artillery fire occurs before infantry/cavalry combat. I experimented with rules based on Viktory, but without some form of rallying they were far too bloody. Good luck with your experiments. I'll be following with interest.

To be honest I had not considered using a computer based system although I know that some gamers have very successfully. One for the future methinks!

Happy to help old chap! The Neil Thomas book is excellent and it has certainly given me much food for thought so you are in good company!

The hierarchy idea has a lot of merit and I shall certainly explore it in some detail. I will email you off list - I am still playing catch up after my holiday.

That is exactly the lines I am thinking along and I hope to try the idea out later today.

I see the rules has falling into two camps - the only ranged combat will be artillery or when infantry have a marked superiority in firearms. This means that in order to get a game one needs to add in a little more detail at the close combat range (and I do not mean the melee type of combat - perhaps engagement range may be more accurate). What I do not want to do though, is to make this 'hex versus hex' combat too detailed or time consuming.

I shall see how it pans out.

That is a game I would dearly like to get my hands on at some point! Many thanks for the link as I would be keen to have a look at the rules.