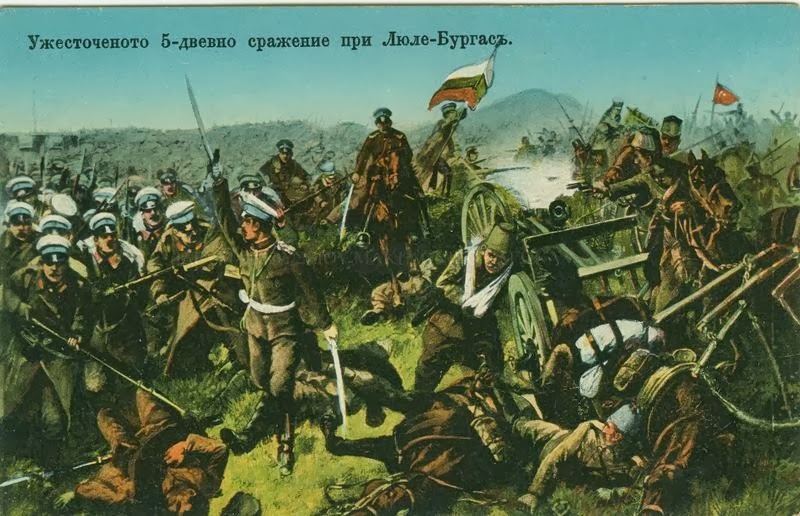 A Bulgarian postcard depicting the earlier battle of Luleburgaz

The opening weeks of the First Balkan War were little short of disastrous for the Ottoman Turks. They had been comprehensively defeated by the Bulgarians at Kirkilisse and Lulaburgaz and were being steadily pushed back towards Constantinople in a state of complete disarray. The Turks were harried from one defensive position to another and were frequently overrun at bayonet point by the seemingly unstoppable Bulgarians. Fortunately for the Turks, the Bulgarians were somewhat tardy in following up having completely outrun their logistical support, so rapid and unexpected had their successes thus far been. The Turks were eventually able to disengage  relatively easily whilst the Bulgarians paused to draw breath and so were able to both consolidate and reorganise their shattered armies. Being a lot closer to their supply centre than the Bulgarians (Constantinople was a major centre of supply and was only some 40 kilometres from the Catalca position), they were able to take full advantage of the unexpected lull in the fighting and so the already strong position was rendered virtually impregnable. On the overall scale of things though, it was very much a damage limitation exercise as the war was effectively lost already. However, the Bulgarians would not be allowed to take Constantinople!

The Catalca position has been described as the strongest position in Europe and it is easy to see why. From the Black Sea to the Sea of Marmara the peninsula has a single ridge bisecting the entire distance. In some places this rises to 200 meters above sea level and is fronted but flat and gently rolling grass land. The attackers would need to cross this and attack uphill in the face of a heavily fortified and dug in Turkish army - an army that was desperate to avoid the Bulgarians marching on Constantinople. At the Black Sea end of the ridge line (the right hand side of the picture) the Turks also had the support of the Turkish Navy although the gunfire, whilst morale boosting for the Ottomans, was largely ineffective.

The Bulgarians, under Lt. General Radko Dimitiev, outnumbered the Turks but not excessively so. In truth, their hard fought but easily gained victories had served to make the Bulgarian high command somewhat over confident in their abilities - it was felt that cold steel would carry the day as it had done so far. They had not reckoned on the Turkish obstinacy when defending a secure position - a position flanked by the sea at either end and with forts and trenches in between, all overlooking the gently rolling countryside over which the Bulgarians would have to advance.

I used Bob Cordery's Memoir of Battle rules to fight the action - the version with the use of the Battle Cry/Napoleonics combat dice to determine how many units could be activated each turn. The only amendment I incorporated was to allow any rolled pairs of icons to be exchanged for a single unit type of the players choice e.g. two cavalry symbols rolled could be changed for a single infantry figure. The net effect was to lose a symbol from the number rolled (in this case 6 dice each side) but with a slightly better degree of control over the orders of a game turn. The action was fought on a 9 x 8 hexed playing area and with the majority of the Turks on the ridge. The infantry and machine guns were in trenches with the artillery in the two fortifications. I chose to have the action starting at relatively close range as the actual battle started under a morning mist which served to disorder the advancing Bulgarians.

33 strength points with an exhaustion level of 16.

40 strength points with an exhaustion level of 13. 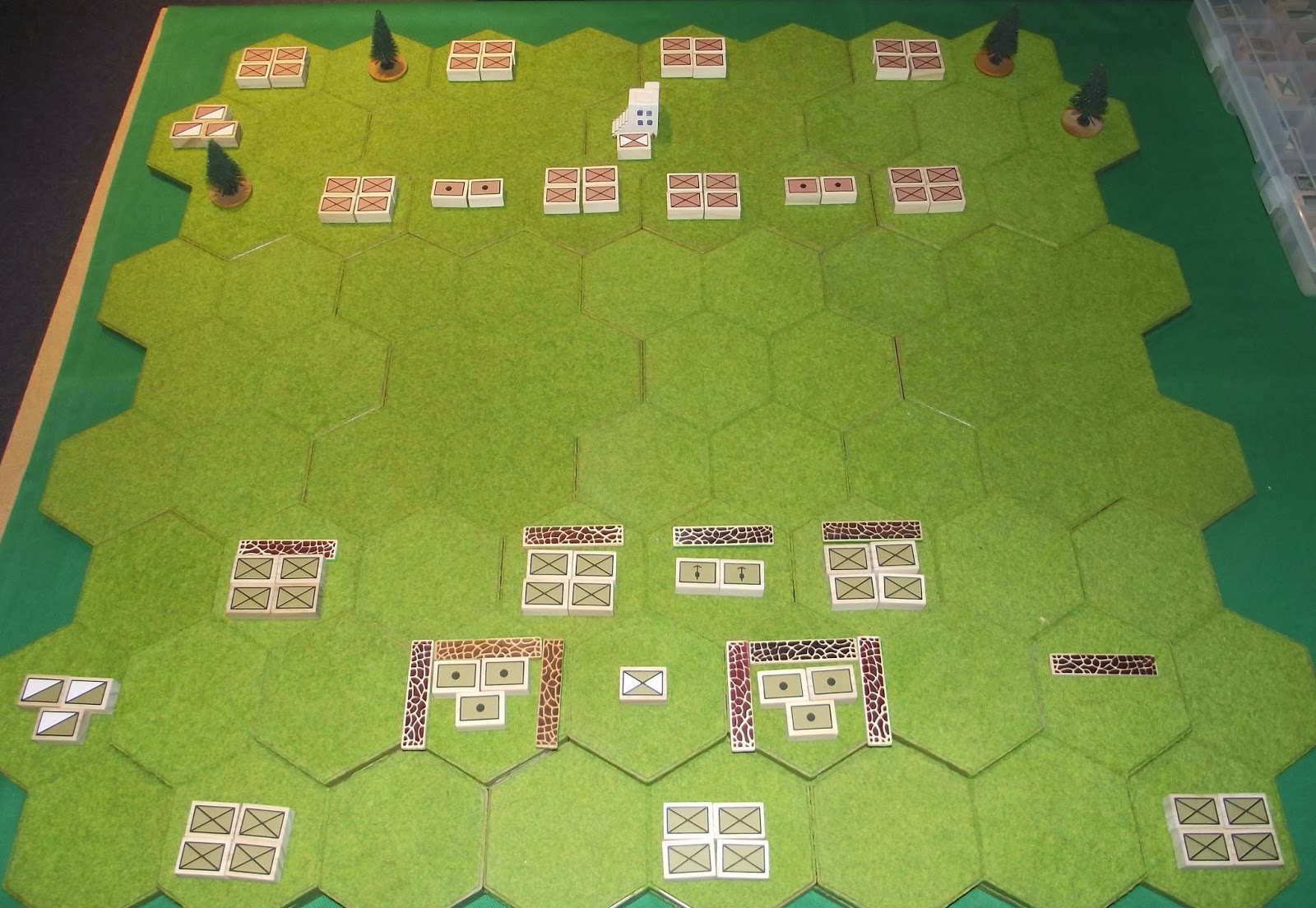 The initial dispositions with the Turks deployed behind their formidable and extensive defences with the Bulgarians drawn up to face them. 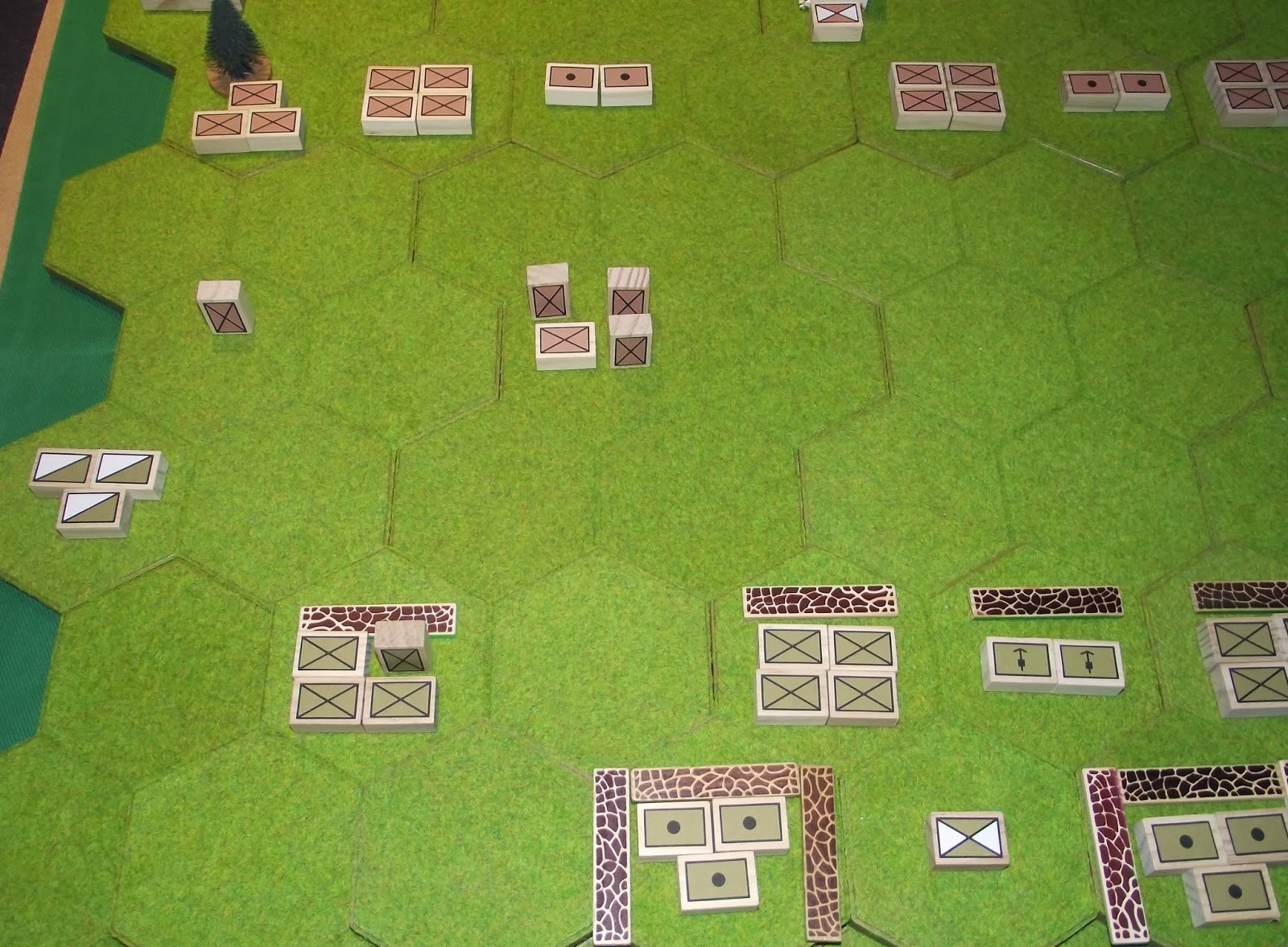 Turn 1. The Bulgarian right advances under artillery support and is immediately met with massed Turkish rifle and heavy gunfire. The extreme right hand Bulgarian infantry units take minor casualties but is forced back by the charging Turkish horsemen. Meanwhile the central infantry units suffers grievously from a deluge of rifle and shellfire. The attack grinds to a halt.... 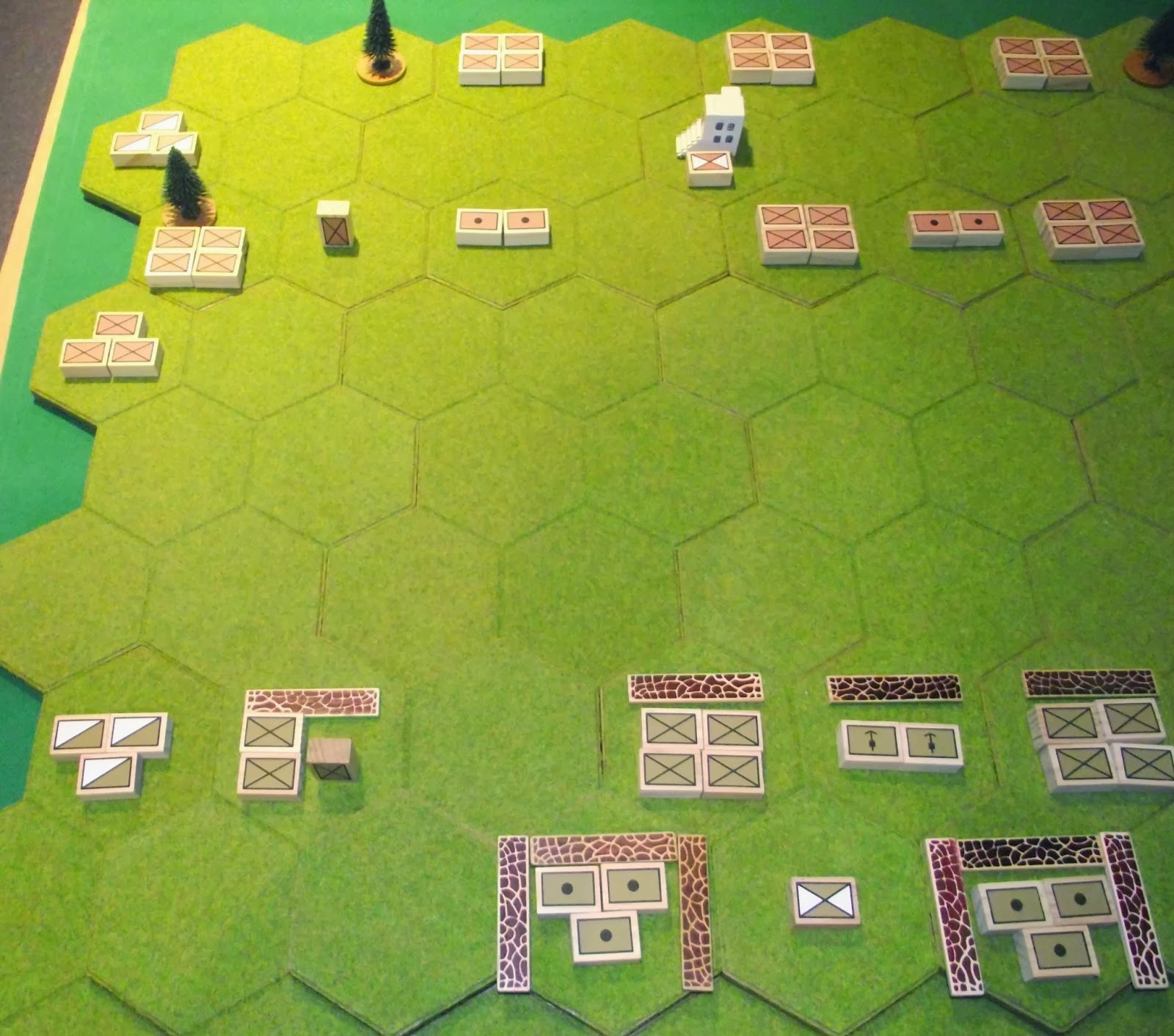 Turn 2. The Bulgarian artillery continues to hammer the Turkish positions whilst the victorious Turkish cavalry falls back to the main line. The Bulgarian infantry takes the opportunity to reorganise and ready itself for the next attack. 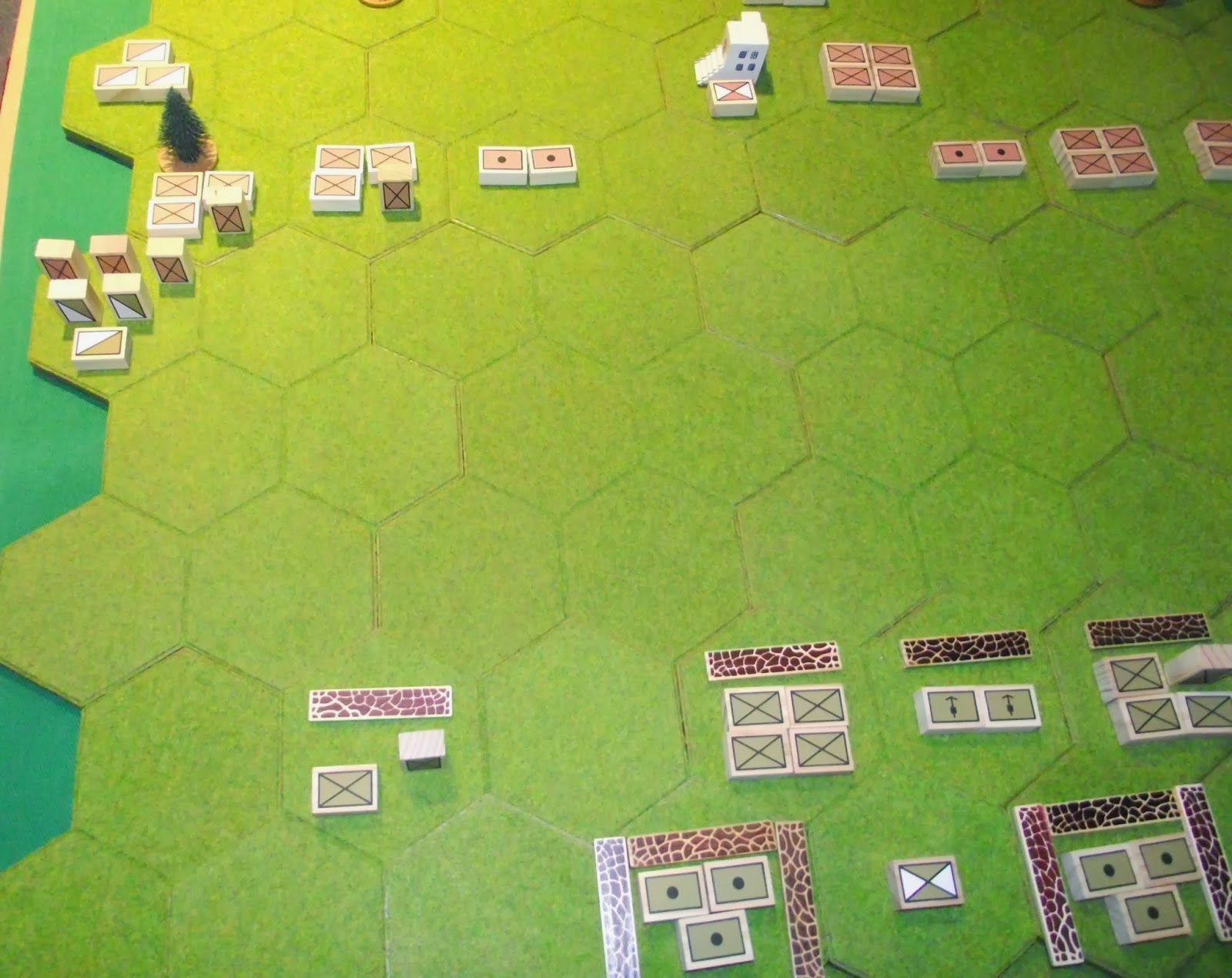 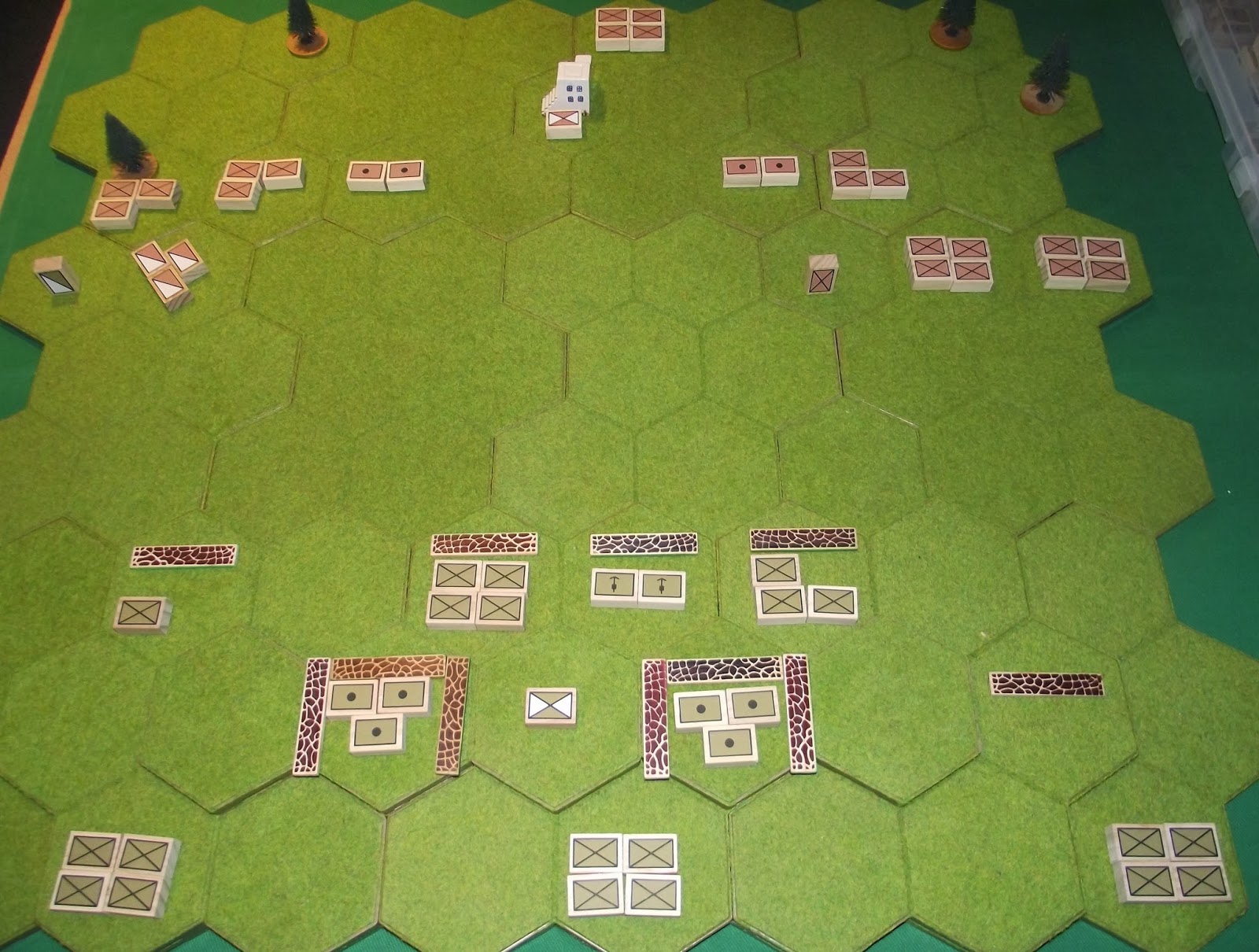 Turn 4. In the south the Bulgarians manage to reorganise their infantry but the damage has been done and they are no longer strong enough to trouble the Turkish defences. Whilst the Bulgarian artillery continues to plaster the forward Turkish positions their cavalry manages to destroy the last of the Ottoman horsemen but for now all eyes are turned to the north. 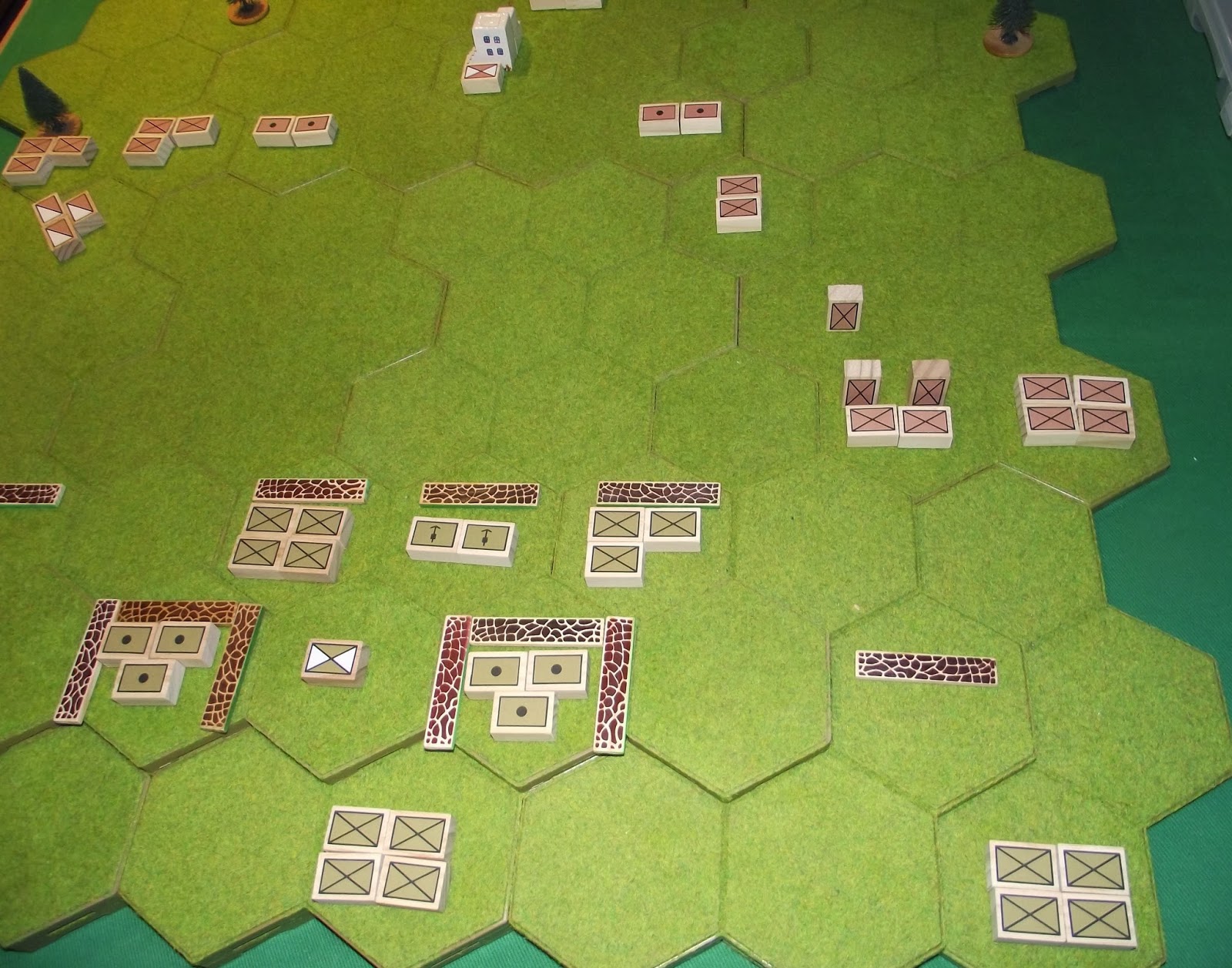 Turn 5. the Bulgarians launch three infantry units into the attack but the combination of Turkish rifle, machine gun and artillery fire proves to be too much. One unit is reduced by half and pushed back whilst a second manages, in the face of a veritable maelstrom of fire, to hold their position. From his command post n the centre of the Bulgarian start line Lt. General Dimitriev reluctantly gives the order for his infantry to fall back - the advance of Constantinople is over.

By no stretch of the imagination was this the most enthralling of scenarios but I was really glad to have fought it. Essentially it was a frontal assault against a very well prepared defensive position - the shape of things to come in the Great War - and the end result was hardly surprising. Historically the Bulgarians were very over confident but were beginning to suffer the effects of Cholera and so their previous elan was on the wane. Their approach to the position was lethargic and the Turks were ready for them with pre-ranged artillery and masses of fortifications. The Bulgarians in the actual battle managed to bypass one of the ten forts and penetrate the Turkish lines to the depth of some 500 yards before the Turuks were able to eject them. This particular attack was actually at night. I want to fight this action again on a larger and more representative scale (representing some 25 kms of terrain on 8 hexes is a little extreme even for me!) at some point but for now the action ensured that the Turkish military could extract at least a crumb of comfort from a war that was already lost.
Posted by David Crook at 21:22

In a way it reminded me of the old arcade game of Space Invaders! Seriously though, the game demonstrated very clearly the folly of attacking a prepared position with inadequate numbers and across open ground.

Shades of the Great War even!

I can see why you changed your plans and fought this battle instead of the one you had intended to fight.

Despite it being a bit of a grinding match, it looks like it was an interesting battle to fight ... and has convinced me that I should re-visit my MOB rules.

I must confess that my curiosity was piqued as to how the Bulgarians could have possibly carried the position. It is an action I would like to fight again in due course and on a slightly more representational level.

MOB worked really well - and the changes I added worked a treat.