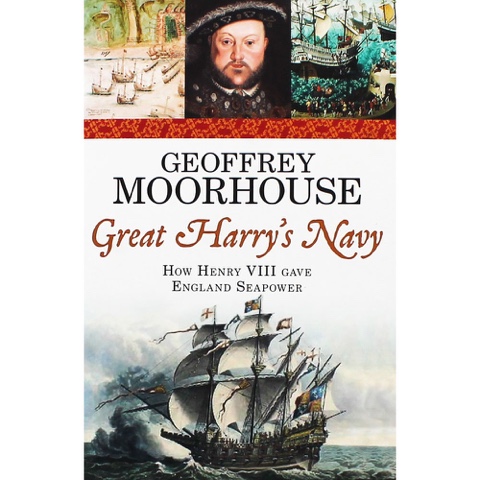 Does exactly what it says on the cover - and with a lot of the details that we gamers like!
Following on from my last post I suppose it was inevitable that some further investment in the period would be needed - esoecially in respect of reading material. The above title has been crtically acclaimed as being one of the best books on the subject and although you can currently get a copy from the Works in paperback I really wanted to get a hardback version. Luckily a quick trawl through EBay came to the rescue and I was able to pick up a copy in very good condition very cheaply - and what a title it is! Not only do we have the background as to why Henry wanted to a strong navy but also how the ships and tactics evolved. Ultimately the stimulus he provided in matters naval saw it full fruition during the reign of Elizabeth and the on-going war against Spain. There are a couple of Osprey titles covering warships in the Tudor era and these are currently on order. My library of Tudor naval history is now a little more 'joined up' and so has given me not only some inspiration from a gaming perspective but also from the historical interest angle.
Greenmantle by John Buchan is a further title in the adventures of Richard Hannay and I downloaded a version as a free ebook onto my IPad and was really pleased I did. Aside from The 39 Steps I have not read of his other titles but this one was hard to resist. Russians, charging Cossacks, Turks, Germans and a Femme Fatale all striving to get the Muslim world on a huge Jihad to aid the German war effort - what's not to like?
I really should make an effort to study the Russian war against the Turks in the Caucasus - particularly as the climatic battle in the book takes place in the environs of Deve Boyun - in which I fought a Russo Turkish War of 1877 battle using the block armies a couple of years ago for my end of year game. Clearly this was an area that saw a lot of military activity over the centuries!
Posted by David Crook at 19:22

Looks like there are lots of copies quite cheap on eBay.

Good to hear from you and I hope your recovery is progressing well! This kind of book I would always opt for the hardback version if possible so I was pleased to get one - I may even grab a copy of the soft cover version if only to take to work for the commute.

Progressing steadily as we speak, tufting some bases, painted some figs earlier. Keeping an eye on the WRC, France are in trouble.

Mary Rose and now the Great Harry (which is, by the way, the name of a pub in Woolwich) ... do I see a pattern developing? Of course!

Greenmantle is an excellent book, and will give you lots of encouragement to continue with your Turkish/Middle Eastern project.

A few years ago the Navy Records Society produced a facsimile of The Anthony Roll (a survey of Henry's navy made in 1545). If you can get a copy it's well-worth having for the beautiful colour illustrations.

*Thinks* - I'll do a blog post on it, so people can see what I'm talking about.

I haven't a copy for sale, but if you're after some cheap books on the Armada, I have some in Diplomatist Book's naval section ;) - http://www.abebooks.com/servlet/SearchResults?sortby=17&vcat=Military___History_________Naval&vcatn=Military+History+-+Naval&vci=61057945

I always find that doing something - even very simple - when I am unwell (although not to the scale you have been!) is very therapeutic so keep on tufting and painting and watching the Rugby. As I write this Ireland seem to be getting back into the game but are still losing.

If I am honest from a Tudor naval perspective I am more likely to tackle something Armada or Sea Dog-ish - low key with a few ships, possibly some land stuff rather than the earlier period. Having said that reading about the effective birth of the navy under Henry has been very interesting.

Many thanks for the heads up re the Anthony Roll - I will certainly keep an eye out for a copy. I would be very interested in reading a blog post about this in due course - it would certainly keep the inspiration going!

I will take a look at the books you have - my own Armada library consists of four titles - so you may have something I can add - strictly in the name of research of course....;-)

Here we go, so info and pics on the Anthony Roll - http://diplomatist2.blogspot.co.uk/2015/10/the-anthony-roll-of-henry-viiis-navy.html

I may well be after a couple of books from you so will email you 'off piste' so to speak.

You can't go wrong with Buchan DC, he is just the business. I recommend all of them. 39 Steps, Greenmantle, Mr. Standfast, the lot.

And if you like Buchan, you really must read Setting the East Ablaze by Hopkirk. Non fiction describing the fact behind the fiction. Just brilliant stuff.

I thought that I had a book which I could recommend to you for background information on the Royal Navy. I just couldn't find it.

I have now found it.

The Command of the Ocean by N.A.M. Rodger.