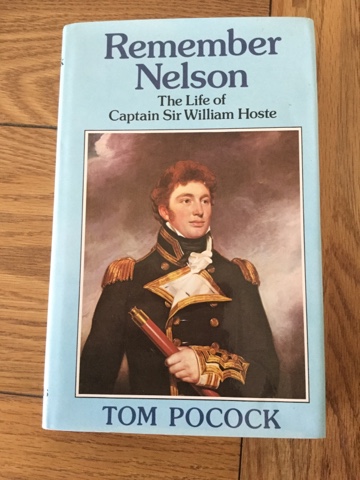 I am a great fan of the author Tom Pocock and have several of his titles in my collection. The book you see above is the latest and was acquired at a local boot sale for the princely sum of 50p. Captain Sir William Hoste was in command of the Royal Navy frigate squadron at the battle of Lissa in 1811 and 'Remember Nelson' was the signal he ordered to be run at the onset of the action.

Hoste was very familiar with the Adriatic and the operations therein would make for ideal gaming material due to the scale involved - none of the fleet actions so beloved of wind and water naval gamers, this was real low level stuff - raids, cutting out and taking on the odd fort for good measure. In fact his exploits would be very familiar to anyone that has read Hornblower.

I rather like the idea of gaming in this theatre in some fashion or another and would not expect to need much in the way of kit to do so. I am thinking that Peter Pig's 'Pieces of Eight' pirate rules may be a good place to start in terms of rules ideas as they allow for government forces as well as pirates and other assorted irregulars.
Posted by David Crook at 14:55

I was particularly pleased to get this as not only is it a hard back first edition in reslly good nick - it is also so a lot cheaper than I have seen it on Ebay for - in paperback!

Lots of potential as well.

Fanastic pickup, and very timely just ahead of the 210th Anniversary later this month

...210th Anniversary of Trafalgar that is, obviously, not Lissa..

You did get me thinking with your first comment....;-)

Luckily your second made sense of it all!