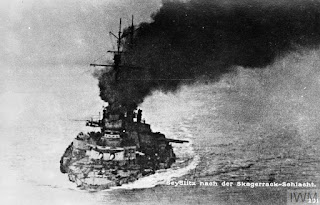 S.M.S. Seydlitz - battered, bloodied but unbowed, limping home after Jutland. She would spend some time in dock being repaired but was back with the fleet by November.
﻿

I am truly sorry but my mind is made up. I have spent the last few days pondering a whole series of things associated with the naval rules I have been working on and however I dress it up it simply does not work in the way I would like. I have therefore decided to abandon the attempt.

I enjoy Jutland the 'board' game as is and within the context of what it is trying to represent (operational squadron/fleet sized naval combat) it is a wonderful game. I shall continue to use this (and all the various expansions) as it is an old favourite with much potential. As far as 'tweaking' the rules are concerned I shall not bother as they are fine as written, subject to my oft-repeated caveat of 'context'. In attempting to modify or port certain features of the system I have learned an awful lot from all of the research I have carried out as well as trying out the various game mechanisms I have explored, so the time and effort has not been wasted.

My plan instead is to revisit some old rules that were left unfinished and unloved and to 'dust them off' so to speak. These are rules that will definitely offend the purist and will also step away from the usual level of hard data that form the basis of so many sets of naval rules.

This will require something of a leap of faith from myself as I have been firmly wedded to the concept of translating technical data for naval rules for as long as I have been playing naval wargames.

It will be a refreshing change though, to tackle rules that are not set out to be quite so dogmatic.
Posted by David Crook at 10:03

It's a real shame mate, you have put so much work in, maybe you just need a while a way from the rules before you can come back to them with renewed gusto.

If you are ever near Leeds let me know and I will try and put on a game at the local club so you can try out my rules.

I am very lucky in that I have a captive audience who thrash out my rules fairly quickly so I rarely loose momentum.

Thanks for your kind words - it is much appreciated. I had gotten to the stage where I was just not enjoying the process. This was probably my third attempt and so I really need to walk away and approach it from a different angle. As mentioned, I have a couple of quite different ideas I will mess around with so I am not abandoning the period as such.

As ever the progress will be reported via the blog and although it is unlikely I will get to Leeds in the near future I thank you for your offer - it would have been fantastic to take a closer look at your superb collection!

I've been in similar situations in the past. Sometimes its best to package it all up, put aside and come back to it in a year or so. And it would be a shame to let all that work go to waste

I will package it all up and ironically I will be revisiting the base game very soon (in fact in my next blog post). All the work thus far will not be wasted as it has set my thoughts in new directions.

I’ve enjoyed reading about your adventures in designing a naval warfare game. I even brought out my copy of Jutland (from what, nearly 50 years ago now?) with a photocopy of the typewritten version 2 rules we must have gotten from Dunnigan for play testing. In those distant days, my friends and I were deeply into Fletcher Pratt WWII naval battles with 1:1200 models on our basement floors. We had quite a naval race going on adding new ships to our fleets as we could afford them. I had, and still have the Royal Navy. Though for some reason lost in time, I do have the Goeben...

Reading your thoughts on the rules, got me to thinking about rules as well. Now, if I were designing a naval game – and I know that talk is cheap, and I’m not familiar with existing naval wargame rules, so it is very possible that I’m reinventing the wheel here – but I think I’d go for more drama and less accounting. I picture using three different coloured dice all rolled at once for each firing ship. The first, let’s say the white die, would determine hit or miss from a little table to account for number of guns firing, their caliber, and distance to target. The green die would determine the type of damage inflicted, if it did, indeed, hit. Say, 1- forward gun turrets, 2 - fire control, 3 – speed, 4 - steering, 5 - magazines, and 6 - after gun turrets. Each of these six possibilities would be assigned a protection value depending on armor, construction, and real world performance. If the shell value exceeded the protection value, then one of six significant-to-catastrophic results specific to each result would be applied according to the number rolled on the last, the red, die. Depending on where the critical shell hit, a ship might lose the fire from a turret or two, fire at reduced accuracy, be reduced in speed or brought to a halt, lose the ability to steer or steer wildly, or suffer a magazine explosion, sinking the ship, or other possible effects. A marker could be placed alongside the ship to indicate the type of damage it has to eliminate book work. With 36 possible outcomes of an effective hit, one could recreate a fair variety of temporary and permanent conditions that would affect the ship’s firepower, maneuverability, and survival.

In the case of your test game,as you say, the English cruisers would have been unable to do more than slow down the Goeben. The protection factor for that type of damage could be set within the possibilities of a 9” gun. On the other hand, it is hard to imagine the cruisers taking more than two or three 11” shells and still being afloat, thus, in this case, every 11’ gun hit would be above every level of protection, making them all critical hits. The key would be balancing the chances of hits to the desired length of game – though, in this game, it would likely have been a short one, as the real life Admiral was keenly aware of. All in all, I’d think that the fact that every ship is in jeopardy of being put out of action or sunk with every roll of the dice might make the game less of a slog of attrition. But then, as you seemed to have found out, the best of ideas can come unstuck when put to the test...

Anyways, good luck with you game. Hope you find the balance you’re looking for. I know that I’m looking forward to more naval adventures in design and on the game table.

Many thanks for your words of encouragement and for sharing some of your gaming history. Play testing the 2nd edition eh? Wow, that must have been fun. I swapped emails with James a few years ago and whilst we did not achieve anything remarkable I was struck by how helpful and supportive he was of my modest efforts.

1/1200th scale Fletcher Pratt is huge fun and I have fought many actions using these rules although not for a while.

You have some interesting ideas which would be worthy of exploration - funnily enough I messed around with a similar system myself - and so I may well pick up on them.

In the playtest I fought the British were always going to get a belting but it was more about what they could do to their larger opponent before abandoning the attempt.

Many thanks once again for your comments.