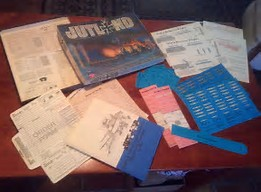 Avalon Hill's Jutland in all its glory - and not a play sheet in sight!
﻿

It was a strange evening last night when I eventually returned to Chez Crook and too late to do anything meaningful. SWMBO had one of her headaches (mercifully not frequent but quite debilitating when they do make an appearance) so retired early on leaving the lounge to myself, one of the three cats and the Christmas tree. I resolved to get something done in order to take advantage of having time of my own as, if I am honest, I was feeling pretty flat about matters gaming related in the light of my recent decision re the Jutland project. My decision was made for all the right reasons and I have no regrets but I do have that nagging feeling that Jutland and I will reunite once again in the future - it what shape though I cannot tell.

Charles Litka very kindly commented on my last post with some interesting ideas and experiences - especially playtesting the 2nd edition of Jutland some 50 years ago! It was a pleasure to read and one expression he used struck me as summing up everything I am trying to achieve in terms of naval wargame rules - in fact I used it for the title of this post (many thanks Charles!).

Emboldened by his comment (and others - thanks to Dave and Ken) and with the lounge to myself I decided to finish up sorting out the collection of Jutland related magazine articles and the folder that they now live in. It was a very therapeutic experience and I rediscovered several important pieces. I should mention that I have everything written on Jutland that appeared in the old Avalon Hill General and Boardgamer magazines on a very useful CD that features the same for all of the Avalon Hill naval titles. I also own a facsimile copy of the Avalon Hill gamers guide to Jutland. What I rediscovered though was something entirely different.

Some time ago (and I wrote a blog post about it) I purchased a whole series of replacement game counters from a chap based in Canada. these included replacements for the original game and supporting a series of articles that appeared in the General and the Boardgamer. As well as additional types for the North Sea there are also counters (and scenarios) for the Baltic, the Mediterranean and the Black Sea. The Mediterranean set is of particular interest as you get the French, Austrians, Italians, Black Sea Russians, Turks and the RN. Not only do you get the ship counters and control sheets there is also a complete set of plot maps for the Mediterranean and a detailed campaign/scenario set of rules. Of particular interest is the use of colliers as well as formation counters for use on the map itself. Finally, there is also provision for the use of light cruisers as individual ships.

With the North Sea additions there are a number of interesting tactical and strategic scenarios including a 1906 'What if' featuring lots of pre-dreadnoughts, a 1914 'What if' when the RN and Germans had virtual parity in capital ships for a short while and two scenarios featuring the return to Germany of Von Spee and also of the Goeben and Breslau.

Having been enthused by all this lot I figured it was about time I cut the counters out - 8 sheets of them - and actually used them. Remember that Jutland is in effect a miniatures game in a box and the counters (scaled at 1/4800th) can be readily substituted for models. A couple of things struck me whilst sorting through all this lot. Firstly, the game badly needs a playsheet - especially with the advanced and optional rules, both official and unofficial. This is something I have in hand and it will make life a whole lot easier than referring across multiple magazine articles during a game. Secondly, and most importantly, Jutland really is a naval warfare game that is 'more drama, less accounting'.

In short then, perhaps I should be making use of what I have for what it is rather than trying to fashion something I have not.
Posted by David Crook at 09:39

That final thought is an important one that many of us would do well to heed!

I am going to have to print these out and go through them in detail ;)
Is an AAR coming soon?

That is so true and it certainly gave me pause for thought. At the end of the day I want game between warships that is easy on the grey matter but with the all important 'flavour'. Jutland has both in spades and there is little I can add to it and indeed, why would I want to?

I would save the paper if I were you! There was not an AAR as such from my recent playtest but there may well be one this coming weekend.

BTW, could you drop me a line at roguejedi@btinternet.com please?

Many thanks in advance

That is an excellent line and well worth stealing.

I know its an infinitesimally small consolation but your hard work has revived my long dormant interest in WWI naval gaming in general and with AH Jutland in particular. The fellow in Canada that sells the Jutland replacement and variant counters also sells the Wargamer's Guide to Jutland, of which I'm now a proud owner. Thank you very much. Also my credit card company thanks you!

Thanks for your nice mention in this post. I’m glad to see that you’ve gotten your enthusiasm back already. Perhaps a few games of expanded Jutland will spark a renewed interest in designing a game of your own. (Perhaps for the China station fleets your building...) In any event, I’m looking forward to more entertaining blog posts. Glad you’re back at it.

It certainly struck a chord with me I can tell you!

The funny thing is that now I have realigned my thoughts on the whole Jutland thing I feel a lot better and my enthusiasm levels are correspondingly higher. Canada is where all my extra kit came from but there are a couple of bloopers on the counters (depending on which ones you acquired).

Goeben is spelt incorrectly - missing the first ‘e’ and some of the Turkish counters use the wrong ship picture.

Good luck with all the new stuff you have and I am pleased you have regained your interest - even if your credit card is less than grateful!

Your comment struck a chord and deserves to be a rule writer’s mantra! I shall game WW1 naval using Jutland more of less as written and in time if I feel the need to branch out will do so. For the time being though I will stick with the plan and reckon that even the China station stuff could be incorporated in some way.

Much to ponder but for now I will crack on with the ships and play some games using Jutland.