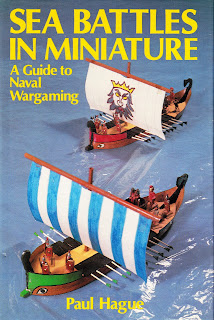 The first edition of Paul Hague's series on naval wargames - and one of my favourite wargames books. 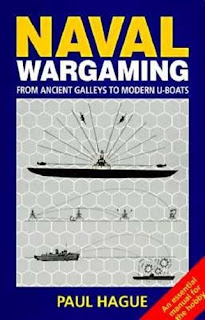 I would not call this a sequel - more like a themed collection of ideas that expand elements of the first edition.
I have owned the first edition of Paul Hague's Sea Battles in Miniature for some time now and indeed, have fought some cracking actions using the WW1 set back in the early 1980s. I had seen the follow up volume around but for one reason or another had never gotten around to adding it to my collection.
All that changed as a result of a phone call with Mr Fox a couple of weeks ago as he had a copy that was no longer required and would I care to take it off him? The deal was speedily concluded and so I am now the proud owner of a copy of Naval Wargaming.
There are some nice ideas contained in its pages - I like the dreadnought based damage section although it is wholly unsuitable for what I am currently developing as it is better suited to small scale actions. There is a submarine warfare section that looks interesting as well as a large scale ancient galley hex based set of rules and something for the large battles of the 17th century.
All in all then it was a pleasure to add this to the collection for completeness sake; my thanks to Mr Fox for thinking of me!﻿

I have the second ed - a great work!

I have long thought Paul Hague's first book the best on naval wargaming I've ever read. Never did get to follow up on its ideas, much to my regret. 'Hiatus valde deflendus'.

I agree with the Archduke. It must be about 37 years since I bought the first book and it remains not only the best naval wargames book I've seen but one of the top three or four wargames books I've owned. The second book was pretty good but never inspired me to re-read it - in part or in full - anything like as often as the first.

Checked out the first book on Amazon £24 second hand or £56 new!

Mega Envy
I would love the first edition book!

It strikes me that these should be prime candidates for the naval wargames section of John Curry's History of Wargames project. I did find that there are supposedly free e-book versions at landebook.com but am suspicious of this site as it could be a pirate or indeed delivering malware (and in some cases these sites don't even have an e-book - they just want you to click on a dangerous link). The fact that the domain was only registered on 30/1/18 and, though supposedly in the USA, the address of the owner is in Cyprus just adds to my suspicions.

Welcome back - are you ashore yet? There are some very useful ideas contained therein for sure.

I have to agree with although the list of naval wargames books is a lot shorter than the land version!

They would be prime candidates for John Curry methinks - I am unsure of the whereabouts of Mr Hague though - and I have also seen PDF versions of the first book.

As I recall my second hand version of the first title was around the £10 mark.

I am unsure of the new part on Amazon though as to my knowledge it has been OOP for some time.

It is a peach of a book!

I agree with Mike Hall (and the Archduke) - the first book is one of the all-time classics. I do hope Mr Hague - wherever he is - knows how highly it is esteemed.

Given the age of the first edition I would be interested to see if Mr Hague has evolved his various rules over time. Now that would be something to see methinks!