WW2 At Sea in the Mediterranean 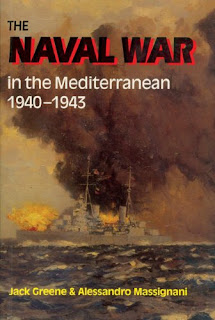 Helping to flesh out the naval section of my Mediterranean library. My 'new' copy was cheap but is ex library. I don't mind that but if I am honest I would not have bought it had it been described as such as I prefer normal copies rather than former library types. Picky I know but hey ho!
﻿

It never ceases to amaze me how easy it is to fall into the old wargaming trap of project creep. You know the thing - first a new set of rules and a modest shopping list, then something related pops up and before you know it the whole thing has grown way beyond what was originally intended.

I like to think I am a leading authority on this curious phenomena as I am constantly suffering from it! Take my recent acquisitions at Cavalier. One cannot think about combat in the desert in WW2 without considering the naval dimension. No problem there as I had already factored this in with the Axis and Allies ships available from Historical Boardgaming (they produce some of the additional RN types - I am thinking HMS Warspite - as well as the Italians) but I wanted some more information on the war at sea. To be accurate I wanted to refresh my memory as I used to game the theatre using the Axis and Allies: War at Sea collectable miniatures with Mr Fox, whom it must be said is partial to the odd Italian.

I can only assume that my copy is hiding in the same place as the two Conways that have vanished into the ether because I could not lay hands on it anywhere. Luckily EBay came to the rescue for the princely sum of £3.50 so I now have it back in the collection although I will look to get a tidier version in due course.

The Italians in Axis and Allies only feature as a separate power in the 1940 Europe edition (and the special Global version I believe) and the models available are as follows:

Again, the list is by no means definitive but it covers the basics and so will suffice to begin with.
Posted by David Crook at 16:05

Enjoy the book- it is very good!

I hope you are well! It is a great book and once again I am mystified as to where my original copy went. I will get another version as the one I acquired is a little ragged around the edges but it will do for the time being.

An interesting book, even if it isn't in its first flush of youth!

Your list of Italian ships should give you a reasonably useful force that can give the Royal Navy a run for its money.

I'm doing a series on Italian ships in WW2 on my blog at the moment. https://philbancients.blogspot.co.uk/ I've covered the Aircraft carriers and two classes of battleships so far. In reference to mission creep, I've bought more Italian 1/3000 ships and now have more than Mussolini ever had at his disposal!

I'm doing a series on Italian ships in WW2 on my blog at the moment. https://philbancients.blogspot.co.uk/ I've covered the Aircraft carriers and two classes of battleships so far. In reference to mission creep, I've bought more Italian 1/3000 ships and now have more than Mussolini ever had at his disposal!

THAT IS ONE "GREAT BOOK"
Enjoy

The range is not massive but will suffice for my immediate needs. I merely need to get the order together for them although painting the ‘barber shop stripes’ will be a challenge!

The Italian ship stuff is very informative and I am enjoying the series. In respect of 1/3000th I suspect I could cherry pick Navwar for certain models if needs be as the Axis and Allies range is limited. That is a question for a later date though.

Absolutely! I just wish I could lay my hands on my original copy. Still, this version will suffice until it turns up or I find a better second hand version!