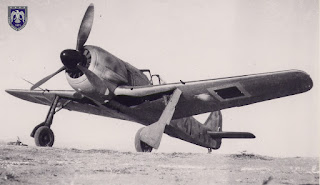 FW 190 A3 in Turkish markings. This is my favourite German fighter of the war although I must confess to having a liking for the Me 109 G series....﻿

* With apologies to any Motown fans....

I now have a lot of Axis and Allies game pieces. When I say a lot I mean around 7 sets worth so there is a prodigious amount of plastic to play around with. Initially I was looking at purely historical forces - meaning some acquisitions from Historical Boardgames to round out the naval forces was needed - and certainly these will feature but I was struck by the amount of material that would be, well, spare.

The solution came to hand quite unexpectedly and as is usual in these cases, I was left kicking myself as to why I had not thought about it previously.

Some while ago I had a brief flirtation with the Turkish army of WW2. I had notions of a scenario whereby the Turks had thrown in their lot with Germany and that a German 'Asia Korp' had been sent to bolster the Turkish Army and was engaged in the Caucasus. there was even a couple of blog posts on the subject as I recall.

Historically of course Turkey opted to remain neutral despite being courted by both the allies and the axis - she was simply not in a fit state economically to engage in a modern war.

The scenario I envisaged to a certain extent mirrored that of the Germans supporting the Italians in the desert and for sure, the advantages to Germany of having the Turks as allies would be many (and was probably why Churchill was so relieved with the Turks 'Ally friendly' neutrality). Although Germany supplied the Turks with some Panzers and aircraft - they really liked the FW190 - the government were able to keep them at arm's length for the duration of the war. Indeed the provision of the tanks mentioned - 56 Pzr 3 J/H and 14 Pzr 4 G - was accompanied by some none-too-subtle prompting during March to May 1943 for the Turks to attack Russia.

Had Turkey thrown in their lot with the Germans the effects could have been far reaching. To begin with the Russians would have a belligerent Turkey on and behind their Southern flank - launching an offensive to coincide with Operation Zitadelle - the Kursk operation. This would have forced the Soviets to keep substantial forces away from the main fight against the Germans. The British would have to ensure that sufficient forces were deployed in the Eastern Mediterranean to counter any potential Turkish moves in the Middle East. This in turn would have had an impact on the Western Mediterranean.

Luckily it never took place but what a 'what if?'

This leads me back to the opening paragraph in that I have an enormous amount of spare kit from the Axis and Allies sets I have been acquiring. A lot of this could be pressed into service to bolster the Turkish armed forces for operations against the Russians and indeed, the use of a German 'Asia Korp' alongside the better known 'Afrika Korp' means that the US supported British forces could be caught between the two.

The more I think about this the more interesting it seems.

Something to ponder methinks.

As a postscript to the supply of German material the Allies responded by shipping to Turkey 25 M4 tanks, 220 M3 tanks, 180 Valentines and 150 Mark 6 Light Tanks as well as a goodly selection of aircraft.

Turkey eventually threw in their lot with the allies and declared war on Germany in February 1945.

The Turks certainly had no qualms about who they acquired weapons from. I understand that amongst their weapons inventory were Russian T-26 Light Tanks as well. The thought of Russian and German armour fighting alongside against British and US tanks sounds very much like the sort of battle we fought in the early days.

The aircraft selection was also quite a mix as well! At the very least it means I can use up a lot of the spares on a historical army that could have fought even though it did not.

I know what you mean about the mixing and matching of kit from the early days!

I have selection of bits and pieces saved about the Turkish Armed Forces of the period and if you think the armour is somewhat eclectic you should see the air force!

I will draft a post on this at some point.