Apologies for the delay with  this post - I had started drafting it Monday (my usual time) - but a couple of work issues intervened. 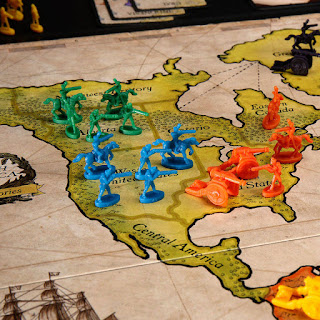 The latest version of the classic Risk. The figures are vaguely Napoleonic and consist of a firing infantryman and what looks like a light dragoon type cavalryman.

Work on the book has been pretty solid this week with a number of keys points highlighted and some important conversations had. All is well. With luck and a following wind I should be submitting the proposal in the next week or so for the commissioning editor to do his thing and then we shall see what we shall see! 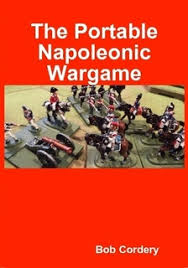 This really is a peach of a book

The arrival of Bob Cordery's latest Portable Wargame title covering the Napoleonic Wars and my reading (and rereading of the same) has been an extended pleasure this week and I cannot recommend it highly enough. It has given me much food for thought for a number of reasons and so it will be as no surprise to learn that I hope to fighting a small action with the block armies over the next week or so to 'get my hand' in so to speak.

Over the past few years I have squirrelled away a number of plastic figures from various versions of the classic board game Risk. I currently have two sets of the figures from the Medieval version (roughly 18 to 20mm), fours sets of generic 18th century figures (two each of the 'thick' and 'thin' versions), a set of the Napoleonic versions with the infamous kneeling infantryman and a couple of sets of the Lord of the Rings set - these are all around the 10/12mm size. All are very useful and I am sure I will get around to doing something with them at some point. I always make a point of looking out for these at boot sales as they can normally be picked up for pennies. 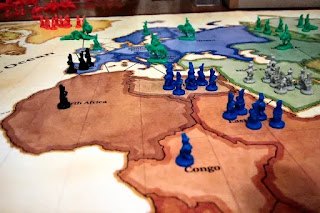 More Risk - this time the infamous 'infantryman kneeling at the ready'

For inspiration as to what can be done with these figures then the blog of that renowned fashionista, bon vivant, wit and raconteur, aka Kaptain Kobold produced a couple of armies for the Great Northern War, complete with a number of conversions. He has used these very effectively in their own right as well as part of an ongoing campaign being fought using Sam Mustafa's Maurice rules. I have posted about his adventures with these figures previously and I am inspired every time I see them! 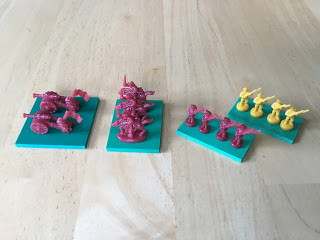 The generic late 18th century figures available in an earlier version of the board game Risk. Note the differences between the two infantry types.

For my own part the 18th century figures (the link shows the differences between the two types) have a number of possibilities which is why I am always looking out for extra sets and indeed, many of the variants of Risk contain much usable material.

In other news my naval adventures are a little on the quiet side at present - my review copy of Cruel Seas is still yet to arrive - although I am hoping that will be changing soon. I have a cunning plan in this respect, a plan that will save me LOTS of time and resources.