A few things to report this week starting with the big news that my planned book has passed the first hurdle with the publisher. Essentially the proposal was accepted and will now be presented by the commissioning editor to 'El Grand Fromage' so to speak, for final approval. In the meantime I need to get some good block based pictures taken to support this final push so no prizes for guessing what I shall be up to later! 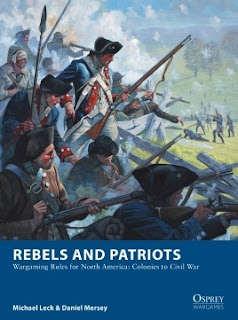 Plenty of inspiration in this one and needless to say I have a couple of ideas!

Last week of course the release of the latest title in the Daniel Mersey 'Rampant' series of wargame rules for large scale skirmish games - Rebels and Patriots, penned primarily by Michael Leck and covering the wars in America from the French and Indian up to the Civil War. I for one was eagerly awaiting this and alongside the others in the series and Bob Cordery's Portable Wargame are by far and away my favourite rule sets of the moment.

The weekend saw the first of the boot sales in our area (it was an indoor version) and despite being tempted by a couple of things I managed to emerge from the hall with my wallet intact. This was just as well and my beloved then suggested a quick trawl of the local high street charity shops - I never need asking twice when she does - and picked up the title below. 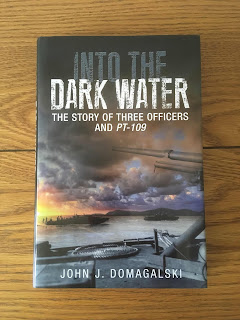 South Pacific, torpedo boats and a future US President to boot - something for the Cruel Seas collection and I am sure this will useful when I eventually get the game....

I should be getting a draft PDF of the flags I shall be using for the command blocks at some point this week which I am really pleased about as it means that I can really press on with some gaming ideas I have.

It should be an interesting week.
Posted by David Crook at 08:32

Fingers crossed the 'Le Grand Fromage' looks favourably on your book. I was extensively involved in playtesting R&P, so am somewhat biased in my views, but I think they are a great set of rules. Hope you enjoy them:).

Many thanks old chap - much appreciated and I hope I do not have too long to wait to find out.

I am looking forward to doing something with R and P - not sure what yet as my interest spans from 1750 to 1865!

They look a cracking set of rules though.