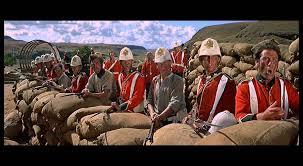 OK so the lyrics were adapted for the film and the singalong never happened but what the hell, this never fails to inspire me!


I suspect that here are few, if any readers of this blog that are not aware of the 140th anniversary of the opening of the Zulu War of 1879, immortalised on screen by the film Zulu (and you could add Zulu Dawn if you wish).

The film Zulu is quite unique for me because this particular film, alongside the Battle of Britain were the only classic war films of the era that I saw on the big screen. I should qualify this by saying that I saw Zulu about five years after it came as a Saturday matinee performance - not when I was four years old! It is a great film to see on the big screen and even now, after having watched it umpteen other times on a variety of televisions, PCs and tablets, I can still recall how it made me feel listening to the beating of shields, that hair-raising Zulu war cry - "Usuthu!" and of course "Men of Harlech!" Stirring stuff indeed.

Fast forward to the last few years and my interest in the conflict from a wargames perspective has been, well to be frank, quite lazy really. I have owned a number of books on the subject and have even gotten as far as investing in some figures for it but like so many of my best intentions the enthusiasm waned and so off they went. I had a small set up in 15mm Essex as well as some Newline figures which were very nice indeed. Further back I even dabbled in a 42mm set up from Irregular Miniatures but again, my short attention span once again consigned the collection to Ebay.  If I am honest my interest in the war kind of hits a roadblock at the end of the first invasion which is a shame as there is much else to look at. I believe this is the reason for my apparent lethargy - I cannot seem to get past Isandlwana or more likely, Rorke's Drift.

The advent of the block armies gave me an opportunity to fight a couple of games set in the war of 1879 and these were enormous fun to do. From the gaming perspective I find the war an interesting one to fight because the two sides are so different. Simply put one side needs to close to be effective whilst the other needs to keep their distance to do so. This makes for an interesting tactical game.

The two block games I fought set in the Zulu War

Should I tackle this period using figures then it would be using the range available from Spencer Smith and I would opt to paint them in an old toy soldier style. There are some quite exquisite figures around for the war but I prefer the simpler style of older figures - they suit my painting technique far better. For the time being though, I shall be using the block armies as I have done so in the past.

I am looking at the Portable Wargame as the rules to use with the block armies and The Men Who Would Be Kings for the figure game in due course.

I suspect I am probably not the only one that is watching either of the films if they have not done so already - my viewing of Zulu will be for the commute to and from work.

This will be a pleasure.

I was lucky enough to visit the sites of this conflict about 20 years ago - very atmospheric , the actions fought by the other columns in the first invasion are interesting .

Now that I have looked at the bigger picture of the war as a whole there is a lot more to it than I had routinely thought. I will certainly game it using the blocks again and will tackle some figures at some point.

It is a place I would like to visit but if I am honest is not likely to happen. It certainly looks very atmospheric.

I remember sitting down with my two lads when they were young to watch Zulu when it first came out on video. My God they loved that film. Happy days.

It is quite simply superb. Yes we know there are enough plot holes in it to drive a bus through but it really oozes period feel and what it must have been like.