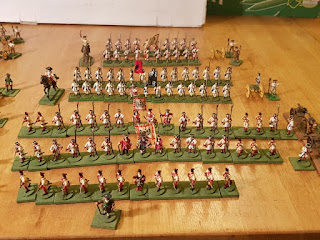 One of the 60 odd pictures I have of a small part of Eric's painted Marlburian collection.

It has been a busy week in respect of the great lead mountain sort out. The last of the Front Rank and Foundry figures have found a new home and this has made a major dent in the collection. Aside from the Minifigs the remainder of the collection consists of Essex, Dixons, Hinchliffe and various other odds and ends - including some rather nice RAFM French and Indian war figures.

After a number of discussions with Bill the plan is to now number each remaining unit box, photograph the contents and sell them as seen via eBay on a 'buy it now' basis. Naturally I shall handle any direct enquiries about anything listed with the utmost discretion....

I should also mention that Bill has come with a great idea that he and I need to flesh out in a little more detail. Basically he is planning on using his local village hall to display all of Eric's painted 18th century collection with a view to the disposal of the same. He has also agreed that selling individual units - bearing in mind his armies typically consisted of figures from several manufacturers - would be a viable option. I will keep you all posted about this but personally I think it is a great idea.

The big advantage of this is that I can condense down the remaining collection into a far more manageable number of crates which could easily live under my gaming table in the man cave. It also means that as I will be able to see the floor once again I can give the place a proper tidy up - just in time for the next lot of Eric's collection to arrive!

With the recent launch of Bob Cordery's Portable Napoleonic Wargame, together with A Gentleman's War by Messrs. Whitehouse and Foley, I am feeling fairly comfortable about my horse and musket rules of choice when I get to the armies. Both have much to commend them so I am confident that which ever path I venture down - either the Minifigs Marlburian or Colonial or Spencer Smith ACW finding the right set of rules will be the least of my worries!

This coming bank holiday weekend will see me dropping parcels of figures off and welcoming my brother in law over from Canada. I have mentioned him before but to remind you he is a former paratrooper that saw active service in the so called 'Aden Emergency'. He is great fun to have around and is never short of an anecdote or two as well as having a very colourful vocabulary of Arabic insults!