Uniforms in the Age of Marborough

Thus far the only information I have about uniforms of the 1670 to 1720 period is courtesy of the two Helion Titles I recently acquired and that feature Turkey, Russia and Venice. I was also keen to acquire something that covered the mainstream armies of the period (no disrespect intended to Russia and Turkey!) and so was delighted to discover that Caliver Books had exactly what I wanted. A swift email exchange with Mr. Ryan and I am now the proud owner of a copy of the book you see below. 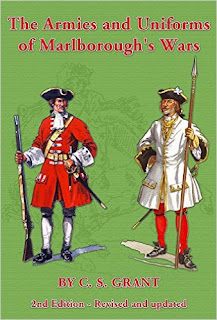 The current version. This is an A4 sized hardback and contains the information from both the previous volumes 1 and 2 as well as some additional details from the authors original WRG From Pike to Shot title. This is a peach of a book with some Bob Marrion artwork, line drawings and a few maps as well. 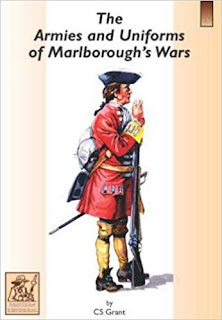 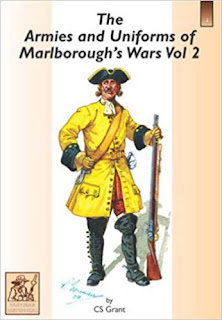 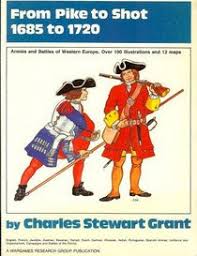 The predecessor to the above and one that I should like to add to the collection for completeness.

Whilst I have no intentions of producing armies for the more usual protagonists of the War of the Spanish Succession having the uniform details is important for my planned 'imagi-nation' forces for the era. The arrival of this book coincided nicely with me starting to sort out the figures I shall be working with and so I already have a few ideas to play around with.

The 'From Pike to Shot' book is excellent, full of great and useful information. I too bought it for background info/ideas for Imagi-Nations armies.

DC - I recommend here as well..

I have all these books and a few more.

I look forward to seeing what happens next with this project. You have chosen well book wise.

From Pike to Shot is on my 'to get' list but even secondhand copies are going for silly money. I will have a trawl about and am sure a copy will turn up at some point.

The more I think about it the more imagi-nations make sense for this particular outing.

I had a feeling you would say that!

Many thanks for the heads up - much appreciated. the funny thing is that I can see me taking some historical armies and 'imagi-nationing' them so any references help the creative juices!

I hope you are well.

I have a list of a few titles I want for the library for this period based project and reckon that you will probably recognise a few once I have got them!

Given your interest in the period I am not in the least bit surprised that you have these!

I am very pleased with the book and it has given me a lot of ideas I can play around with. I do not need to get the two earlier volumes but will certainly be on the hunt for a copy of From Pike to Shot.

David, you might try the Robert Hall uniform CD's. Polemos has a good selection. Good format for painting guides as each regiment has a plate illustrating the colors for flags, soldier, NCO, officer and musician.

I will keep a weather eye open for them as I am very much at the 'lets get as much info as we can before deciding how I am are going to do this' stage.

I hope all is well in your world.