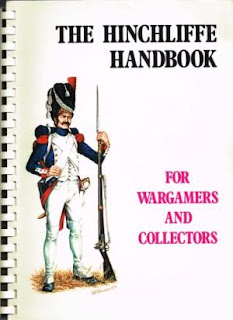 The world keeps turning and so the collection of Eric Knowles is slowly being beaten into submission! At long last I have been able to make a start on the late 17th and early 18th century cavalry list and am aiming to have this ready over the Easter long weekend. In the meantime though the small amount of AWI figures - a mere couple of hundred or so - Eric had acquired have been sorted and are currently on eBay awaiting a buyer. Once I have the cavalry listed I shall then be doing he same for the infantry now that the Foundry and Minifigs have been separated out. the remainder appears to be a mixture of Essex and Dixons and still accounts for a couple of crates worth.

If I have learnt one thing from this process it is that separating out figures by the manufacturer is probably what I should have done in the first place. The several hundred Wargames Foundry Marlburians were easy enough to identify and as they are largely generic it made perfect sense stripping them out of their original units. Essex and Dixons have a surprising amount in common in some cases and bearing in mind my relationship with buying 28mm figures has been minimal over the years it is no surprise I have spent so much time on this. I am not for one minute complaining though! 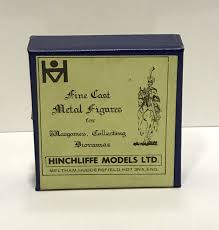 The famous Hinchliffe blue box. Eric has used hundreds of this for his units and they are so old that the corner tabs have lost all adhesion so when you take the lid off the box falls apart! The man cave is littered with these small brown tabs!

Mention of Hinchliffe reminded me of many things from my early wargaming days. The first metal figures I ever purchased were some Russian Napoleonic infantry advancing in greatcoats - even then I was looking at ways I could make my painting life easier! - and wearing forage hats. There were twelve figures originally and I was quite shocked when I purchased the next twelve as they had been completely redesigned and were huge by comparison! I also remember buying Russian Cuirassiers, Hussars, the inevitable Cossacks and some Moscow Militia. I painted them all (except the Hussars that Chris Hardman painted for me) and along with the aforementioned infantry as well as the grenadier units and gun crews I acquired from Tradition, it formed a useful force of around a hundred foot and thirty odd mounted. When I moved to London (this would have been early 1978) and joined the former Newham Wargames Club and discovered that nobody played Napoleonics I sold them on to Eric Knowles himself. I am unsure if these are still in the painted part of his collection but who know?

I rather liked the later Hinchliffe models as they seemed to have real character about them whereas Minifigs always seemed a little soulless. I still think that today although Minifigs have a look about them that satisfies a specific need.

I was hugely delighted to see that Hinchliffe are in fact still available courtesy of Hinds Figures and the prices are pretty modest as well - far cheaper than Minifigs.

Eric has used a goodly smattering of Hinchliffe across his Seven Years War armies as, if memory serves me correctly, they were one of the later 'large' ranges.

I am pleased that progress is being made with this portion of Eric's collection and the resultant trips down memory lane have been very enjoyable although I am conscious of the fact that I need to do something of my own as well.

The Hinchliffe Handbook is a lovely thing, I love to trawl through it to get inspiration.As for Hinchliffe. Ian Hinds managed to buy all of the business except the renaissance Connoisseur, Napoleonic and ACW ranges. My latest project is to replace the Hinchliffe ECW armies that were sold in the 1980's with...well Hinchliffe again.Hinds Figures are really a great price and their post first rate.Now if you should consider putting up any Hinchliffe ECW on E Bay I would really appreciate the heads up.

There are some Hinchliffe ECW in the Eric's collection thathe used for his late 17th century armies. I am in the process of finishing off sorting these out so will let you know via the blog when I have a handle on it.

I was very impressed with the range available from Ian hinds and it certainly brought back a few memories!

Always pleasing to see figures from the past still available. I used Hinds to fill in a few gaps in my Hinchliffe ECW armies. Good service too.

I must confess to always having a soft spot for Hinchliffe figures and Hinds is a great way to add to any armies based on them - and at a very good price as well.

The Hinchcliffe Handbook brings back memories. Full of inspiration. The models have lasted better than many of the period. I still have Hinchcliffe Polish Hussars in my Polish renaissance army. I also have one of those blue boxes somewhere, storing old dice.

Funny you should mention Poles as Eric had rather a large number of these in the unpainted pile I am currently sorting through. The collection is a mixture of Hinchliffe, Minifigs and Essex with the latter providing the Hussars.